So, you noticed your neighbour riding his bike with his dog calmly trotting alongside the other day and you thought: “Meh, that looks easy enough.” But when you tried it with Fifi you ran over her toes twice and got her tail stuck in the spokes.
Apr 25, 2018 1:23 PM By: Joan Klucha 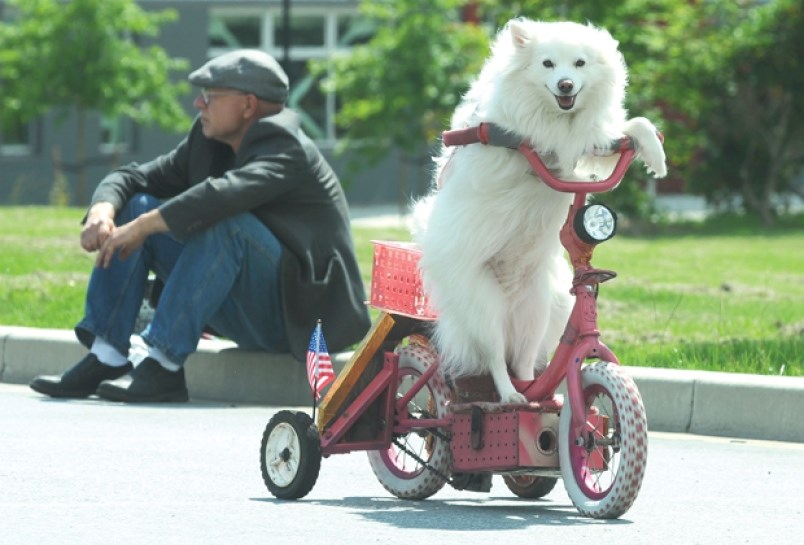 So, you noticed your neighbour riding his bike with his dog calmly trotting alongside the other day and you thought: “Meh, that looks easy enough.”

But when you tried it with Fifi you ran over her toes twice and got her tail stuck in the spokes. Then she pulled you off the bike when a squirrel performed his disappearing/appearing act. And all that was just trying to get down the driveway!

Clearly it’s harder than it looks but you still wonder: “Is there a way to train my dog to be more bike savvy?”

Fortunately, most dogs pick up the concept rather quickly as long as you slowly train your dog to be comfortable beside a bike.

The first step is to teach your dog to heel. A dog in heel position will remain at your side and in control while you are on your bike, which will prevent injuries. The heel command should be a taught separately and be reliable before you introduce your bike. For the purpose of teaching a dog to ride beside a bike on leash, teach your dog to heel on your left side so your left hand can hold the leash while your right hand holds the handlebar and use the right brake. It is safer to stop a bike one handed using the right/rear brake rather than the left/front brake. Front braking tends to send one’s heels over their head.

Once your dog knows how to heel, introduce your dog to the bike. Ask her to heel on your left side while you step to the opposite side of the bike. Basically, the bike is between you and your dog. Just as you lured your dog through the heeling exercise with a treat, you can do the same thing but with the bike between you and your dog. I suggest training in a large empty parking lot away from vehicle and pedestrian traffic. Speaking from experience, you may want to temporarily remove the pedals from the bike while you work through this phase. It will prevent your shins and calf muscles from impalements.

After Fido is comfortable walking beside the bike you can sit on the bike while keeping your feet on the ground to slowly nudge the bike forward. Every once in a while try to coast with your feet up and allow Fido to get used to feeling the unsteadiness of the bike beside him. If Fido gets too enthusiastic and attempts to rush forward in front of the bike give Fido a verbal correction such as “Ah-AA!” followed by the heel command and allow him to adjust himself back into heel position, then give verbal praise.

Next step is to teach your dog to slow down. It is important to teach a slow down command because hitting the brakes on a bike with your dog running alongside can result in injury to both you and your dog.

This is the tricky part because if you go too slowly on the bike you get wobbly and risk falling into your dog, so just go for short distances with lots of stops. Begin by pedalling at a slow yet steady pace then apply the rear brakes and allow the bike to coast to a stop while telling Fido to: “Whoa.” After a few repetitions he will learn that “Whoa” means slow down.

Now it’s time to put the pieces of the puzzle together, so find a quiet area and off you go! Remember to take lots of breaks and monitor your dog’s level of exercise tolerance the whole way.

Remember that every dog learns at their own pace so be patient, kind and have fun!