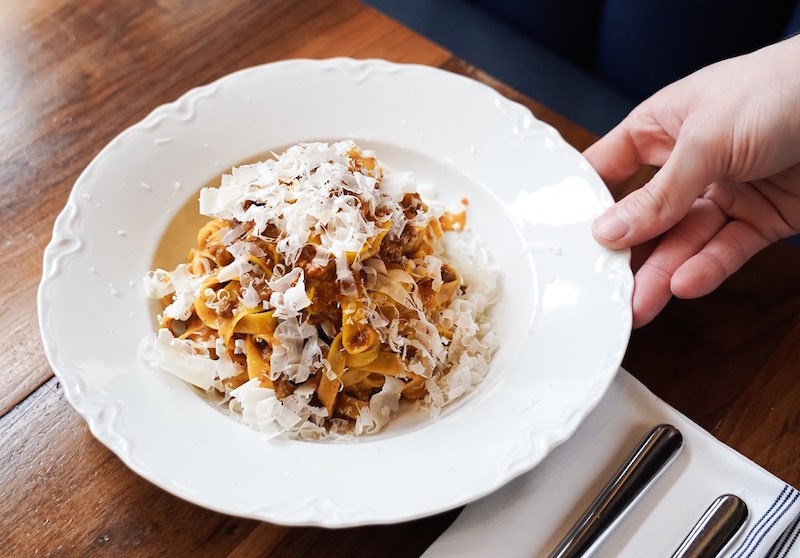 Autostrada is almost ready to open up its third Vancouver location, at the Vancouver House development. Photo via Autostrada Osteria/Facebook

It's been one to watch for nearly a year now: Autostrada, the popular two-location spot for top-notch pasta, is finally saying it is "opening (very) soon!" in downtown at the Vancouver House development.

Autostrada is the venture of Chef Lucais Syme and business partner Dustin Dockendorf, who first had Vancouver taking notice when they launched Cinara on Pender in downtown. In 2018 they created Autostrada on south Main Street - a sibling spot that's a no-reservations, boisterous, laid-back osteria showcasing a slim menu of house-made pasta and antipasti, negronis, and wine.

By the end of 2018, however, Syme, Dockendorf, and the Cinara/Autostrada team opted to bring Cinara's chapter to a close; a few weeks later the space was transformed into a second outpost of Autostrada, which they call the "Downtown" location.

This is the third outpost of Autostrada and was announced in February 2020.

"Our menu will include familiar, well-loved pastas, plus new additions. Expect the same warm, approachable atmosphere, in a beautiful space designed by our friends at Ste. Marie," said the restaurant in 2020.

Autostrada also says they're on a "pretty solid opening timeline" that is "dependent on only a few final details," however the restaurant's website indicates they're aiming for the end of January to launch.

Looks like Autostrada Vancouver House will be open for Happy Hour from 4 to 5:30 p.m. daily, and dinner from 5 to 10 p.m. daily.

Autostrada's two current locations are located at 4811 Main St and 350 W. Pender St in Vancouver; the Vancouver House location is at 1481 Continental St Follow them on Instagram at @autostradaosteria