30 incredible photos that show the true power of nature

Here are 30 incredible photos that beautifully depict the awe-inspiring power of nature in all its guises, including natural phenomena as well as living organisms throughout the world.
Erin Joslyn, Stacker.com Sep 27, 2022 7:00 AM
Listen to this article
00:12:44

It's often said that beauty is in the eye of the beholder, and precious few would refute the premise that the world around us—from majestic mountain ranges to turquoise seas—is a treasure trove of awe-inspiring imagery.

The desire to preserve these images for posterity is hardly a new phenomenon.

Shortly after the advent of photography in the mid-19th century, nature joined portraiture as a preferred subject matter among aspiring practitioners. Notable pioneers include Carleton Watkins and William Henry Jackson, whose photographs of Yosemite and Yellowstone, respectively, helped spark creation of the National Park System.

At the turn of the 20th century, however, nature photography transformed from primarily a documentary tool into a burgeoning new art form.

Landscape photography was elevated to even greater heights by the legendary Ansel Adams, known not just for his stunning black-and-white photos of the American West, but also his important conservationist work with the Sierra Club.

Today, talents such as Ted Gore, Michael Shainblum, and Daniel Kordan frequently go to dangerous and unprecedented lengths to capture their astonishing images.

Modern research empirically demonstrates the positive effects of nature on the human psyche, measurable by the Connectedness to Nature Scale (CNS).

Experts argue that engagement with natural beauty leads to greater life satisfaction. Adams observed that "the world is incomprehensibly beautiful and an endless prospect of magic and wonder."

With that in mind, Stacker surveyed hundreds of images in the public domain, as well as commercial archives, to create this curated slideshow of 30 stunning photographs celebrating the jaw-dropping beauty of the natural world.

Scroll through the images and discover wonders off the beaten path and maybe even a few in your own backyard.

One of the crown jewels of Wyoming's Yellowstone National Park, the Grand Prismatic Spring gets its distinctive rainbow hues from the different bacteria that inhabit it. The largest hot spring in the United States, it measures 370 feet in diameter and runs over 120 feet deep. 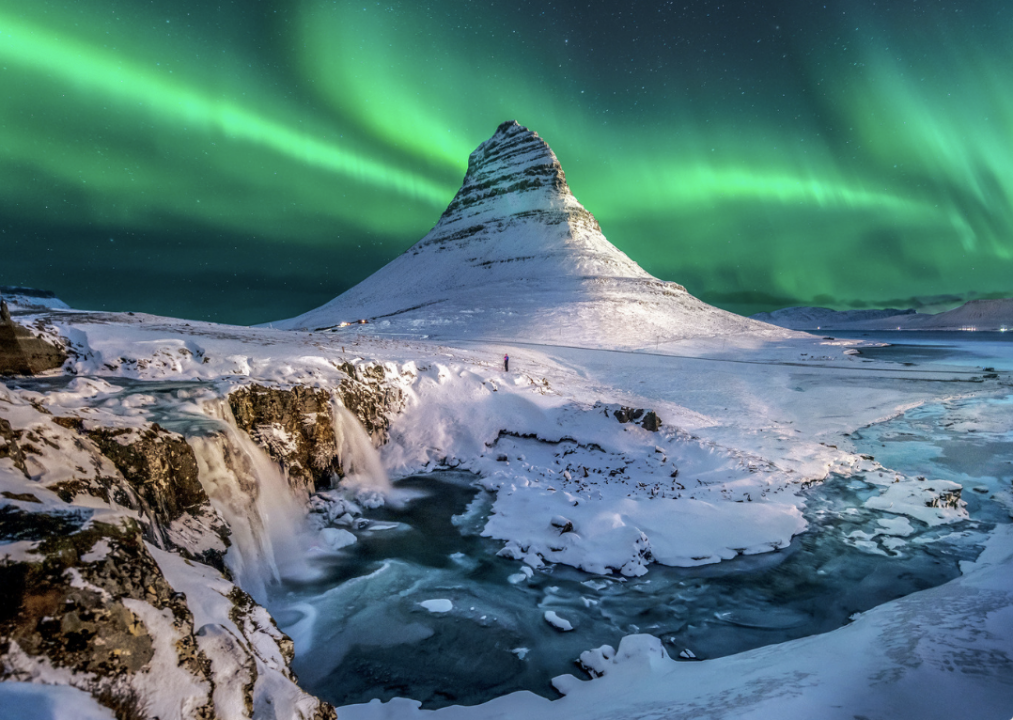 The Northern Lights over Mt. Kirkjufell

The aurora borealis, also known as the Northern Lights, provides a spectacular background for this photo of Mt. Kirkjufell, the most photographed mountain in Iceland. The free-standing mountain is thought to resemble a church, hence the name Kirkjufell, or "church mountain." 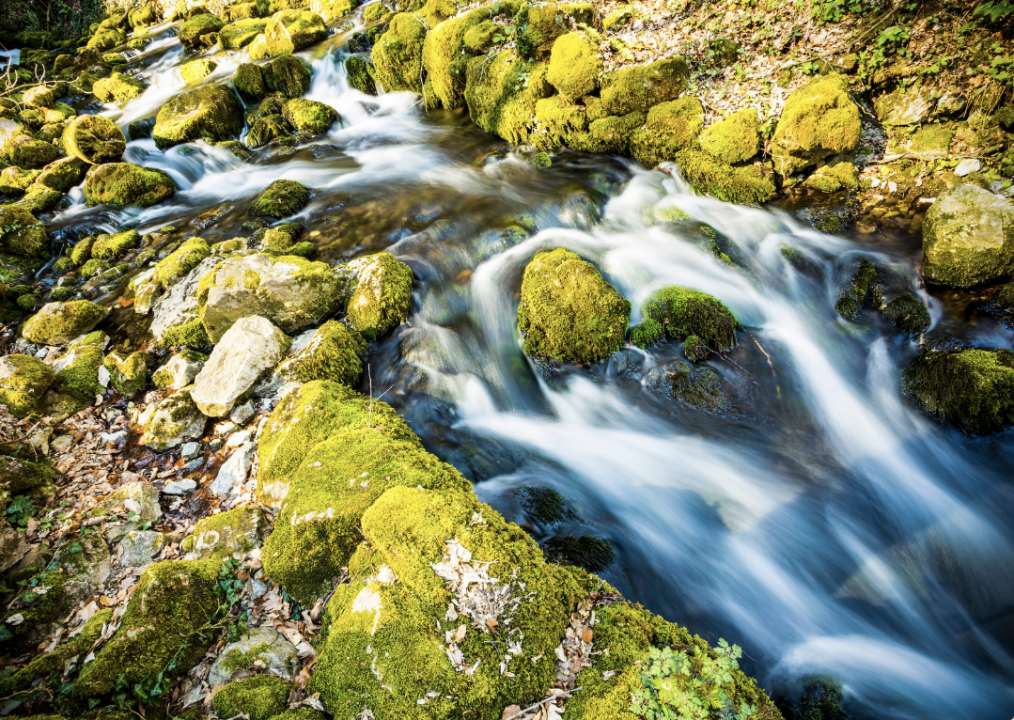 The sparkling Vadu Crişului Waterfall emerges from a kilometer-long cave in the mountains of Bihor, Romania. Discovered in 1903 during construction of a new rail line, the destination is popular with tourists and rock climbers alike. 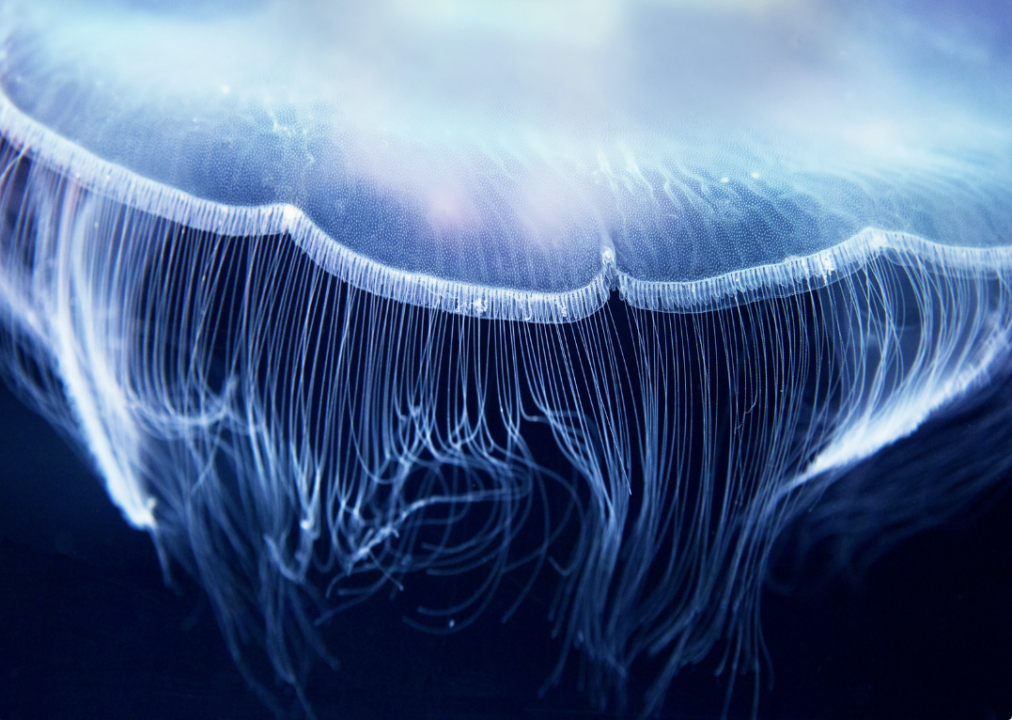 Aurelia jellyfish, commonly known as moon jellies, are distinguished by their pastel, iridescent colouring and are a popular draw at many aquariums. This photo beautifully details the creature's delicate cilia—fringe-like appendages designed to sweep plankton and small fish toward the salt-water invertebrate. 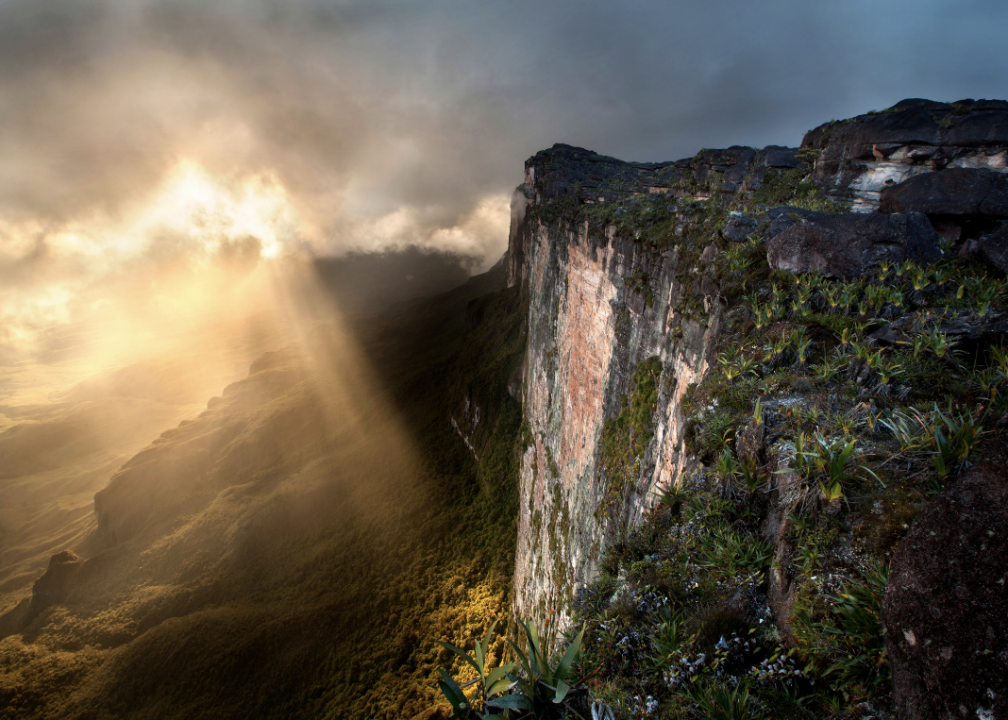 Surrounded by Venezuela, Brazil, and Guyana, Mount Roraima rises 400 meters above the Earth, ringed by a halo of clouds. Over 2 billion years old, the sandstone cliff is accessible to climbers via a sloping path. 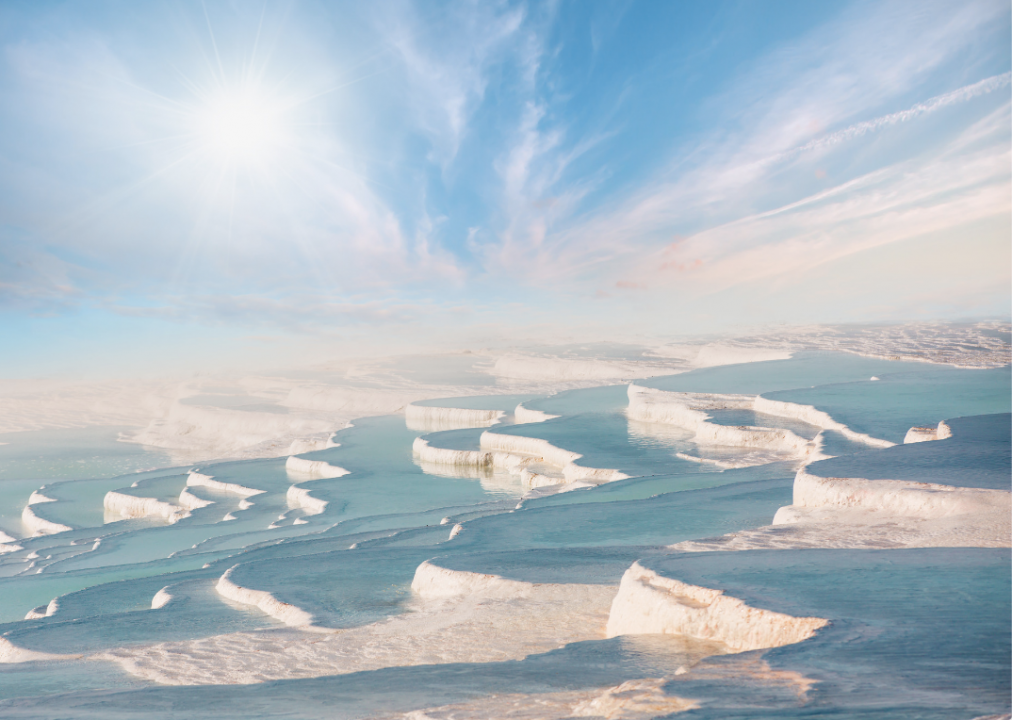 Pamukkale, which means "cotton castle" in Turkish, has been a popular spot with spa seekers for thousands of years. The ethereal, white travertine rock formations overflowing with thermal, turquoise waters were named a World Heritage Site in 1988. 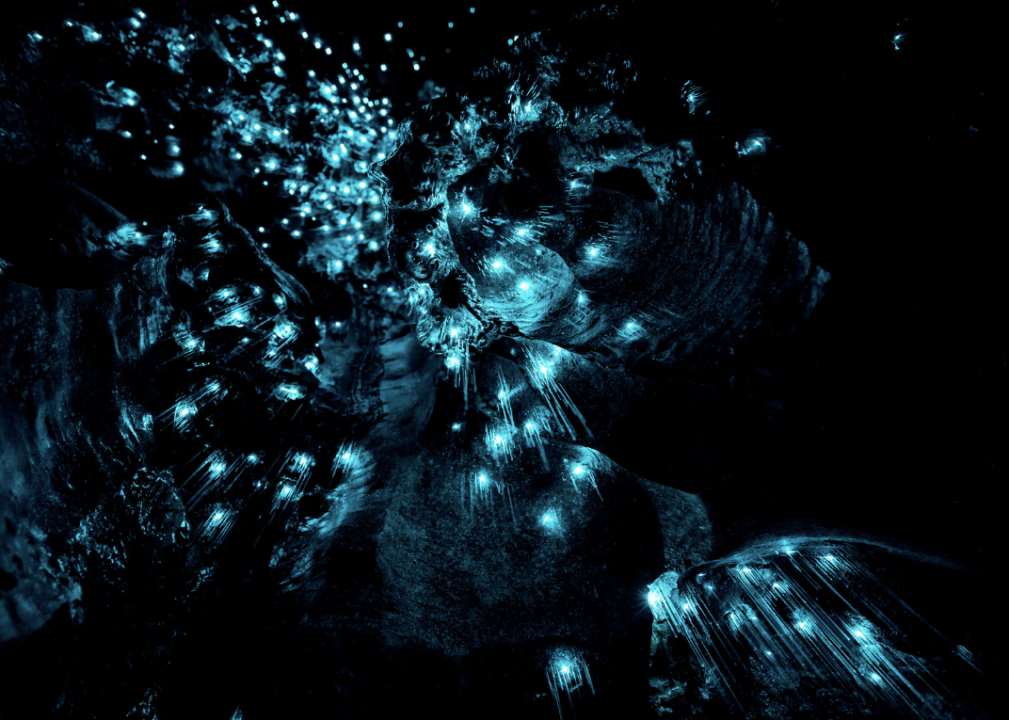 Intrepid adventurers routinely trek through the pitch-black, mud-slick Waipu Caves on New Zealand's North Island to gaze at the thousands of twinkling glowworms that light up the darkest recesses like tiny, blue fairy lights.

Unlike many other tourists destinations, admittance to Waipu Caves and its glowworm galaxy is free. 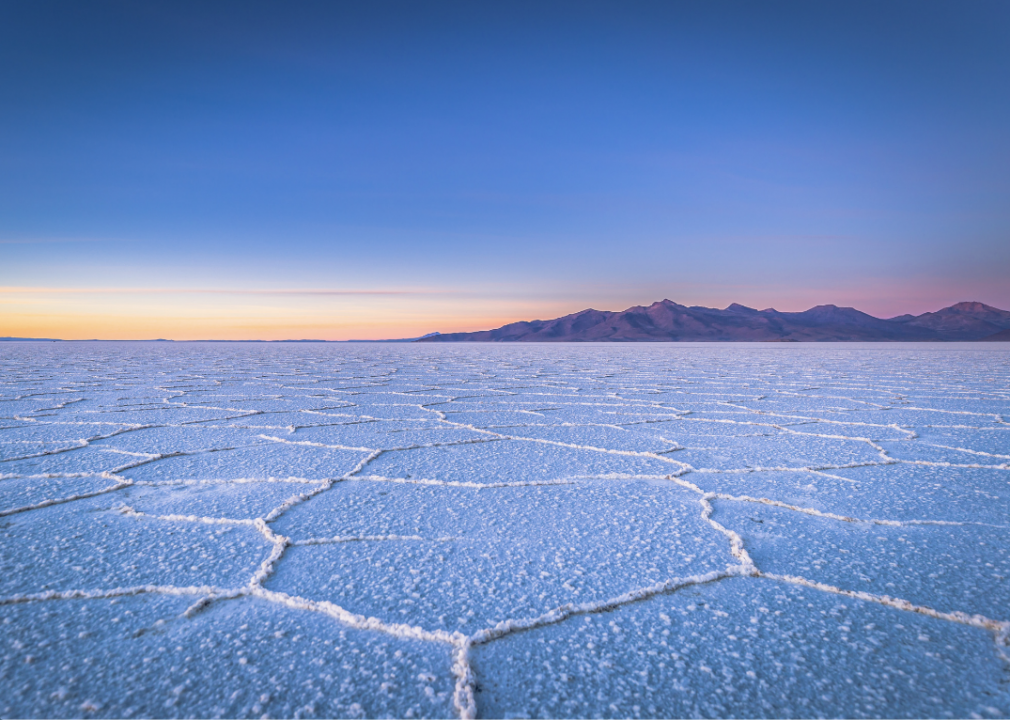 Although the raised geometric forms give it a distinctly modern vibe, the Salar de Uyuni Salt Flats—the largest in the world—are actually the product of evaporated lakes dating to the prehistoric era.

This Bolivian natural wonder transforms into a more-than-4,000-square-mile reflective surface when neighboring lakes overflow. A valuable source for salt and lithium, the Flats are also a tourist attraction serviced by a hotel—made of salt. 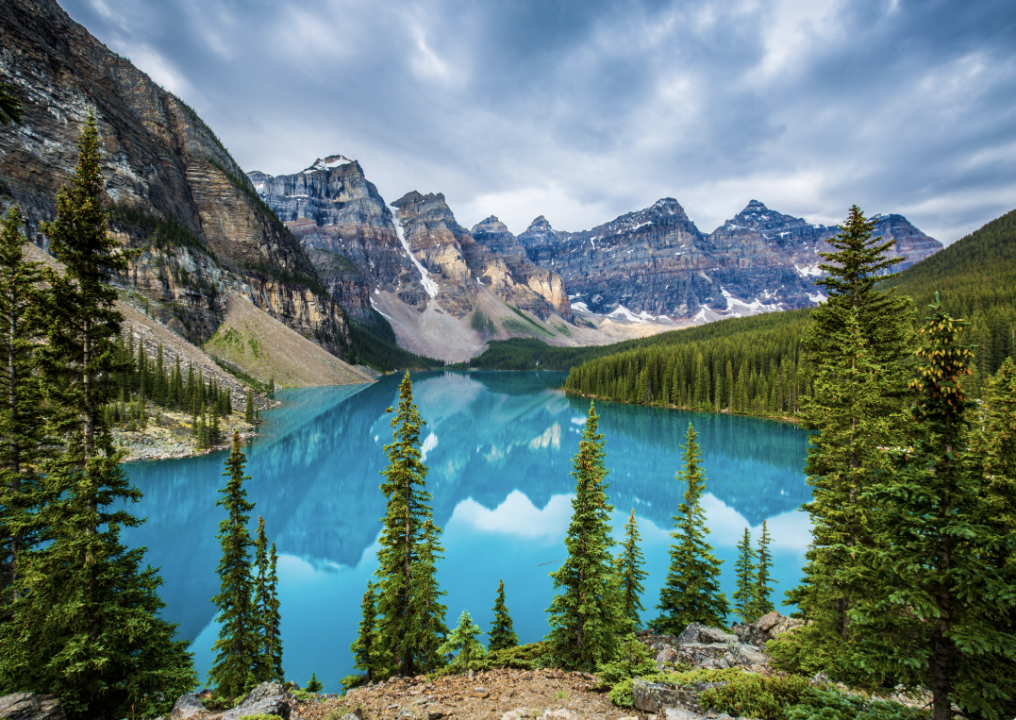 Picturesque Lake Moraine is nestled in a valley in Alberta's Banff National Park. The glacier-fed lake gets its brilliant blue colour via refracted light. 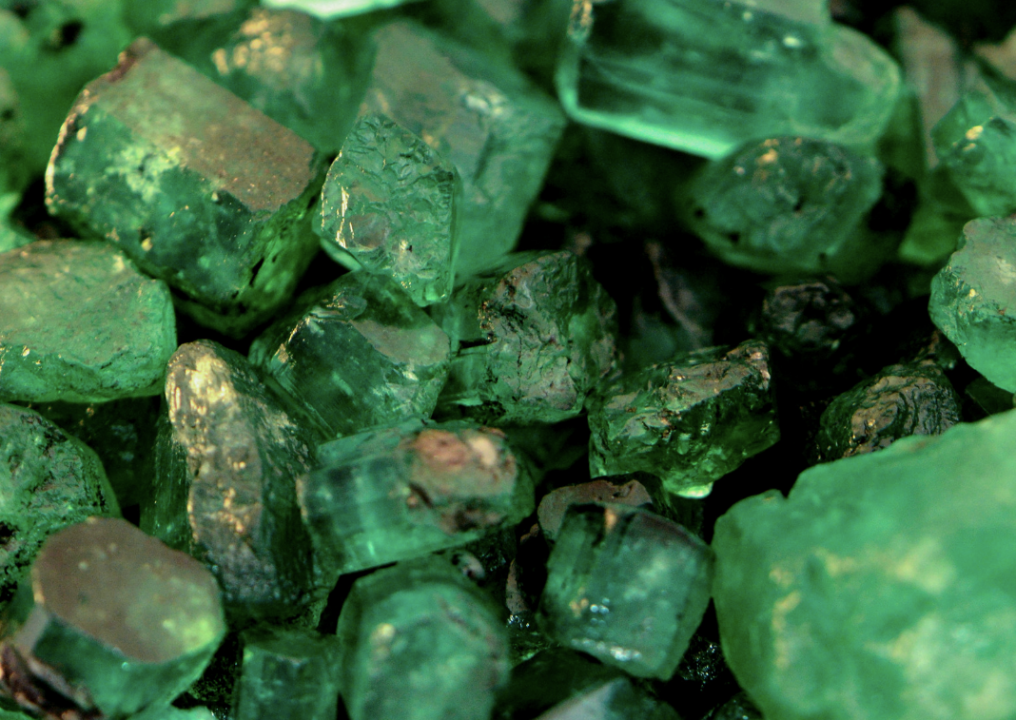 The raw beauty of these rough emeralds rivals that of their exquisitely cut cousins—one of the priciest gemstones on the market. The birthstone for May, emeralds were also reportedly a favourite of Cleopatra. 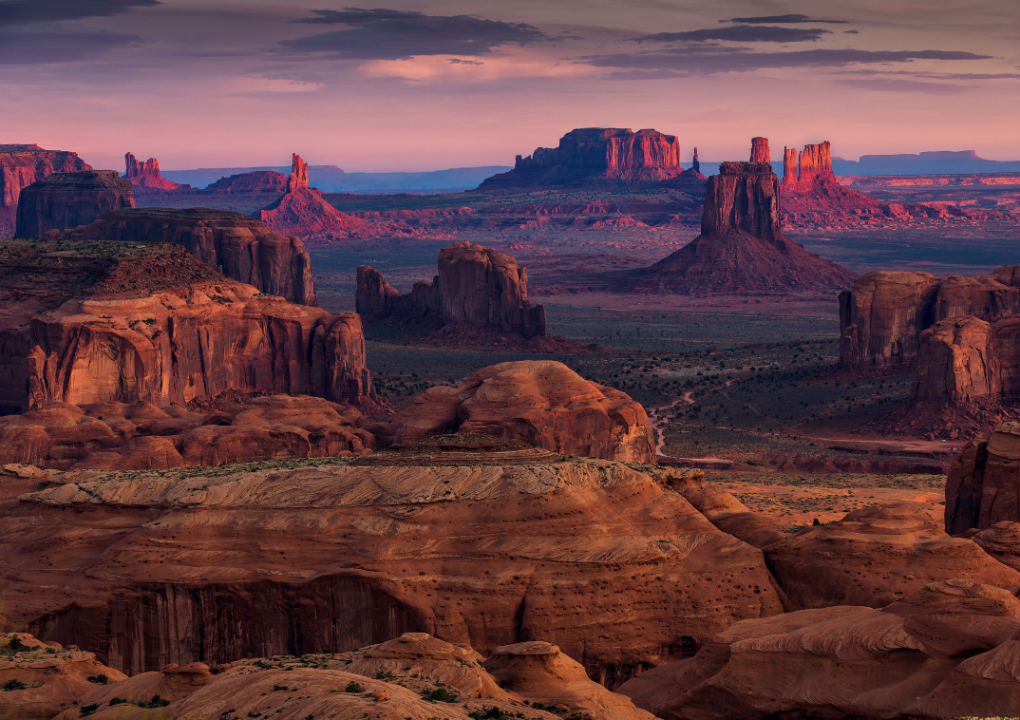 Early morning light bathes the monumental sandstone formations in out-of-the-way Hunt's Mesa in a rosy glow. Part of the Monument Valley Navajo Tribal Park, the iconic landscape served as the setting for countless Westerns, including the 1939 classic, "Stagecoach." 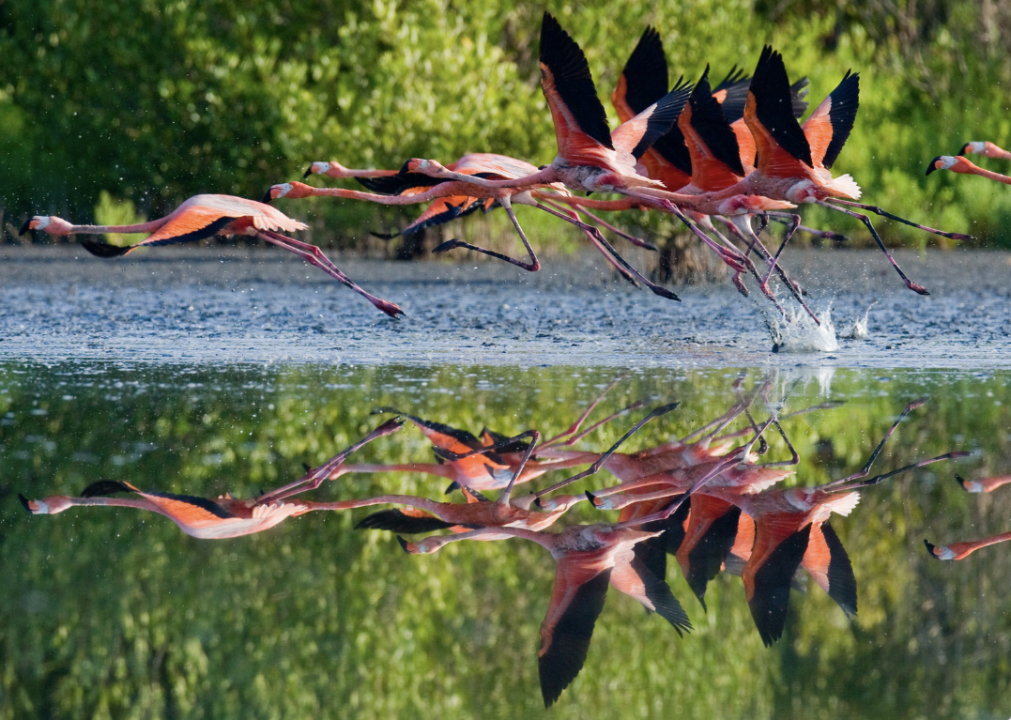 This fantastic photo captures a flock of American flamingos in flight, their crimson plumes reflected in the water below.

One of just six species of flamingos in the world, they are commonly found in the Caribbean, but have been known to venture as far north as the Florida Everglades. 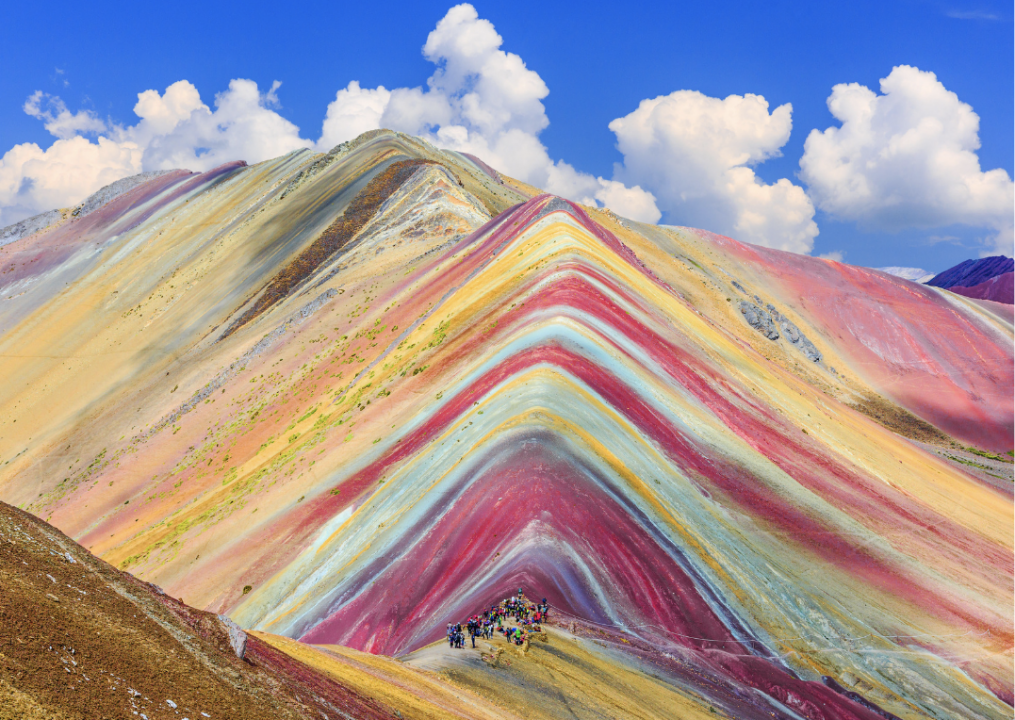 Ideal atmospheric conditions played no small part in the creation of this stunning shot of the remote Mountain of Seven Colours in the Peruvian Andes. The remarkable rainbow hues are the product of striated mineral deposits. 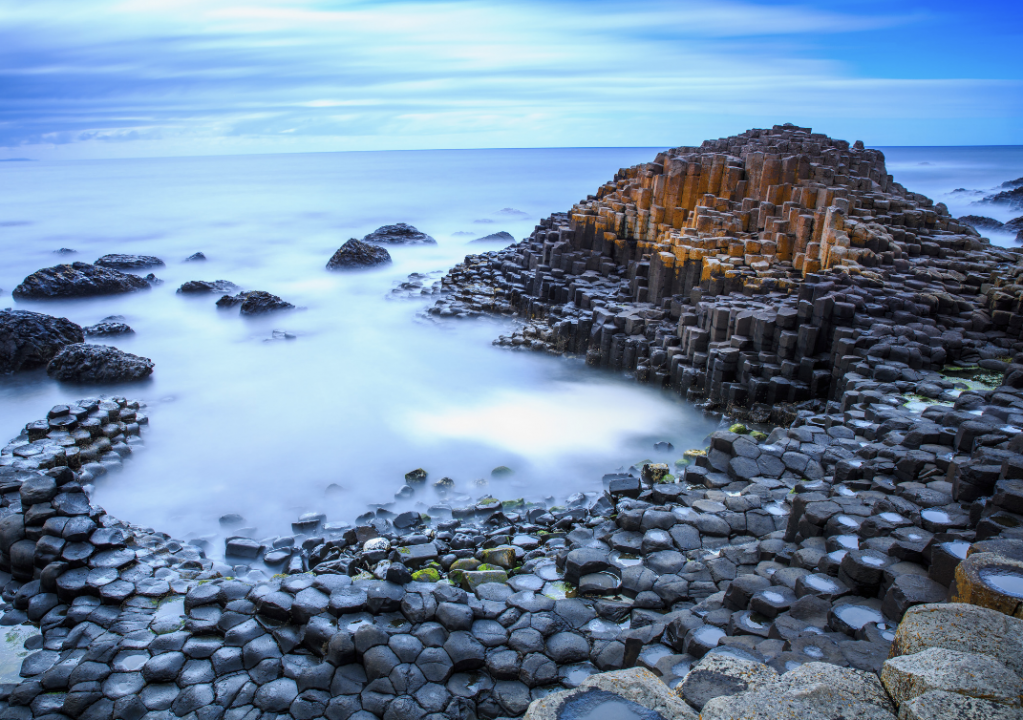 Projecting dramatically into the sea, these approximately 40,000 interlocking, polygonal basalt columns initially suggest the handiwork of a lost, iron-age civilization but are actually the product of an ancient volcanic eruption.

According to Irish folklore, this Unesco World Heritage site was built by the mythological hero Finn McCool. 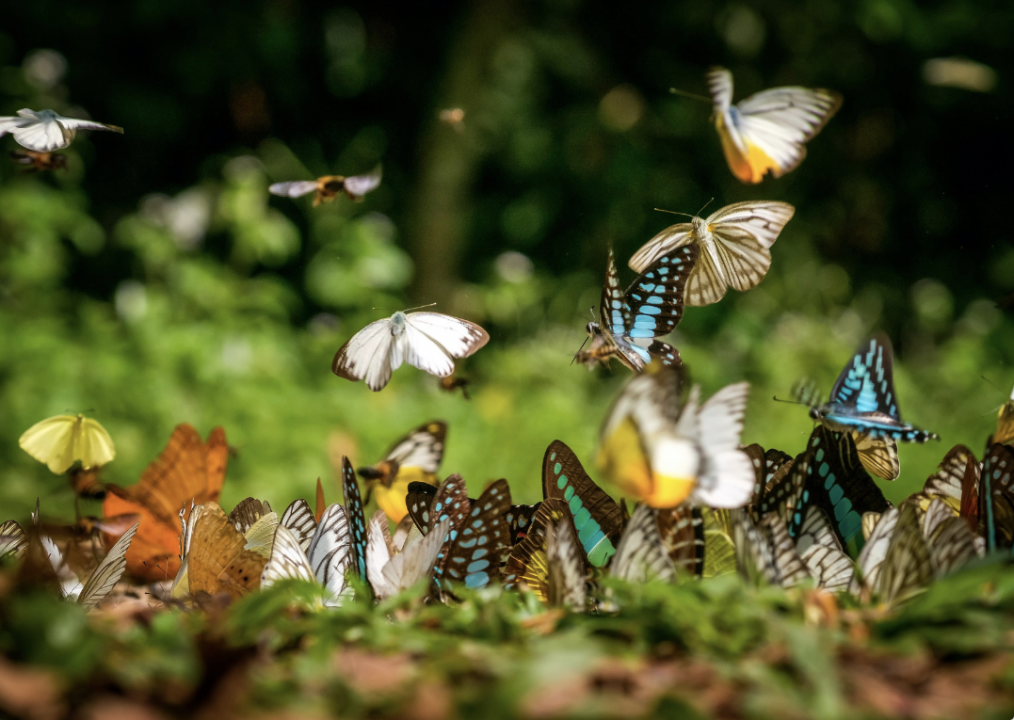 Kaeng Krachan National Park—a day trip from Bangkok—is home to over 300 species of butterflies. Interested photographers need to make haste, as the habitat is currently threatened by road construction. 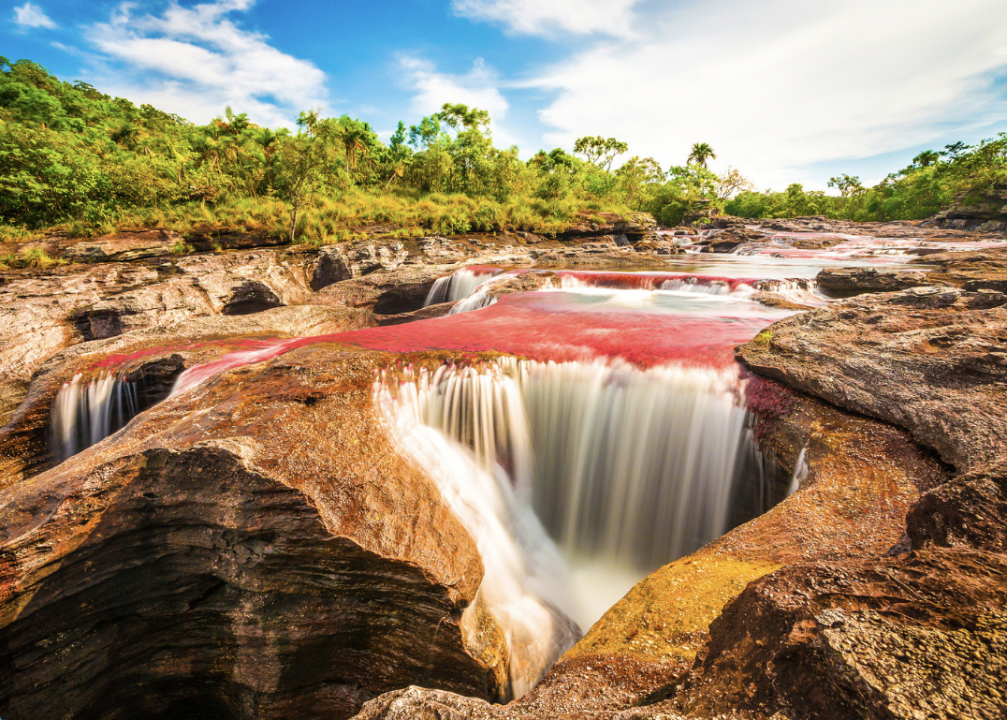 Dubbed "the most beautiful river in the world," Caño Cristales in Colombia's La Macaranas National Park blooms a brilliant shade of red for just a few months out of the year.

Visitors in search of the perfect photo op should plan to visit between July and October when the algae that gives the water its rosy hue is in peak flower—and arrange to be accompanied by a licensed guide. 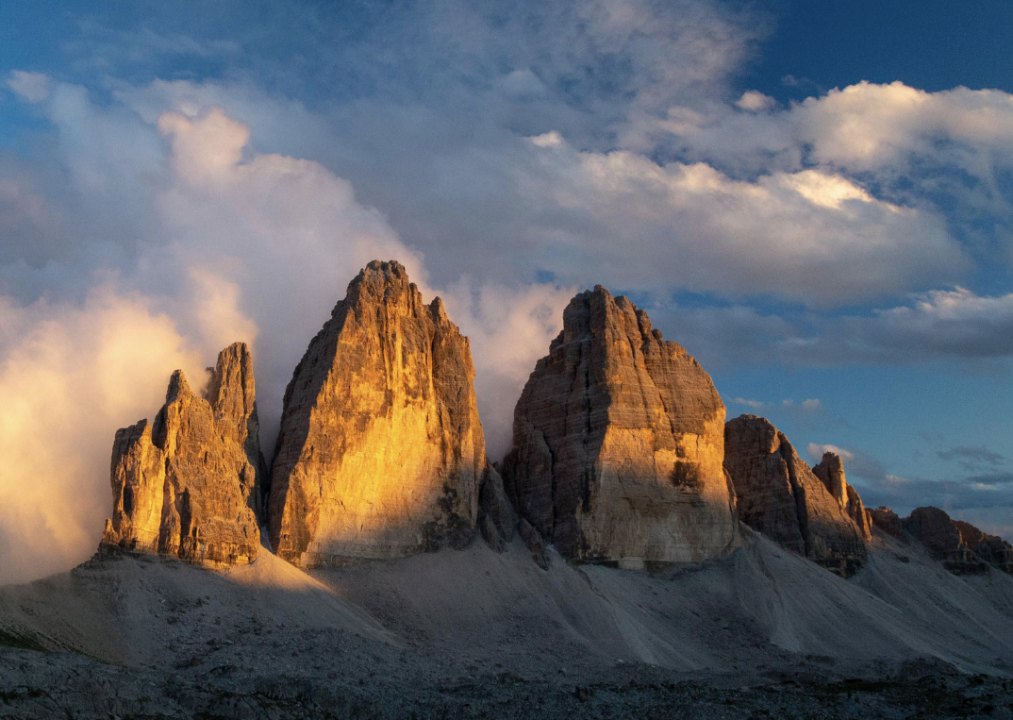 Declared a UNESCO World Heritage Site in 2009, the Italian Dolomites are home this trio of towering mountain peaks.

A beloved destination of hikers and photographers alike, the Three Peaks are best visited in the off-season when tourism is at a lull. 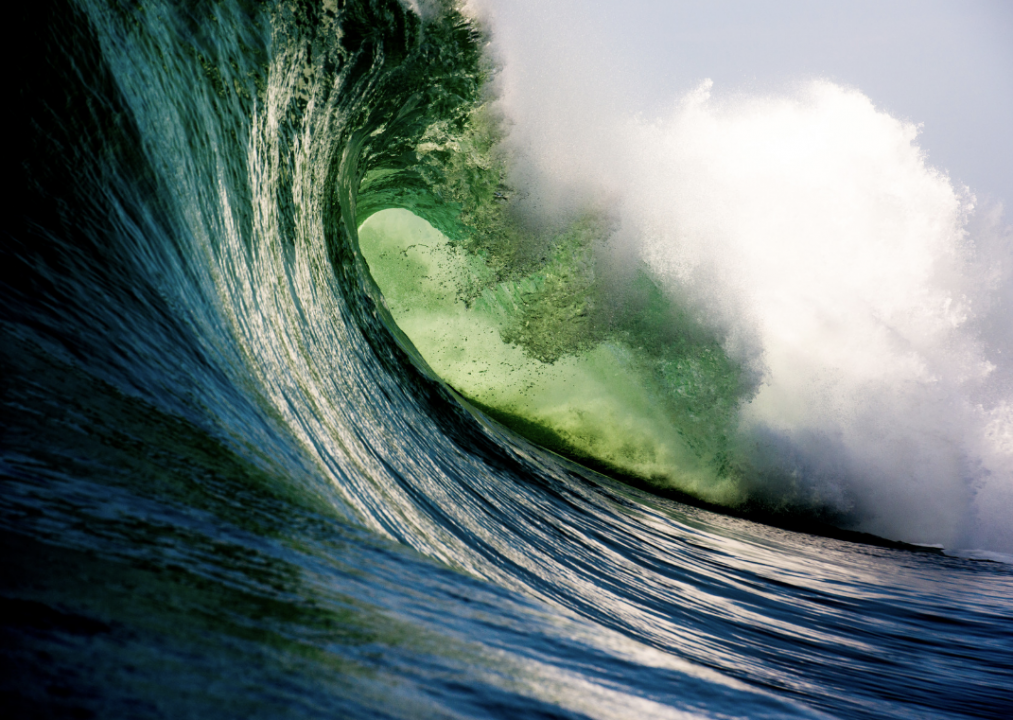 Sylvia Plath referenced the Atlantic, "where it pours bean green over blue," in her seminal 1962 poem, "Daddy."

The critically acclaimed, mid-century poet's vivid description is echoed in this perfectly timed photograph, which brilliantly captures the raw power of a cresting North Atlantic wave. 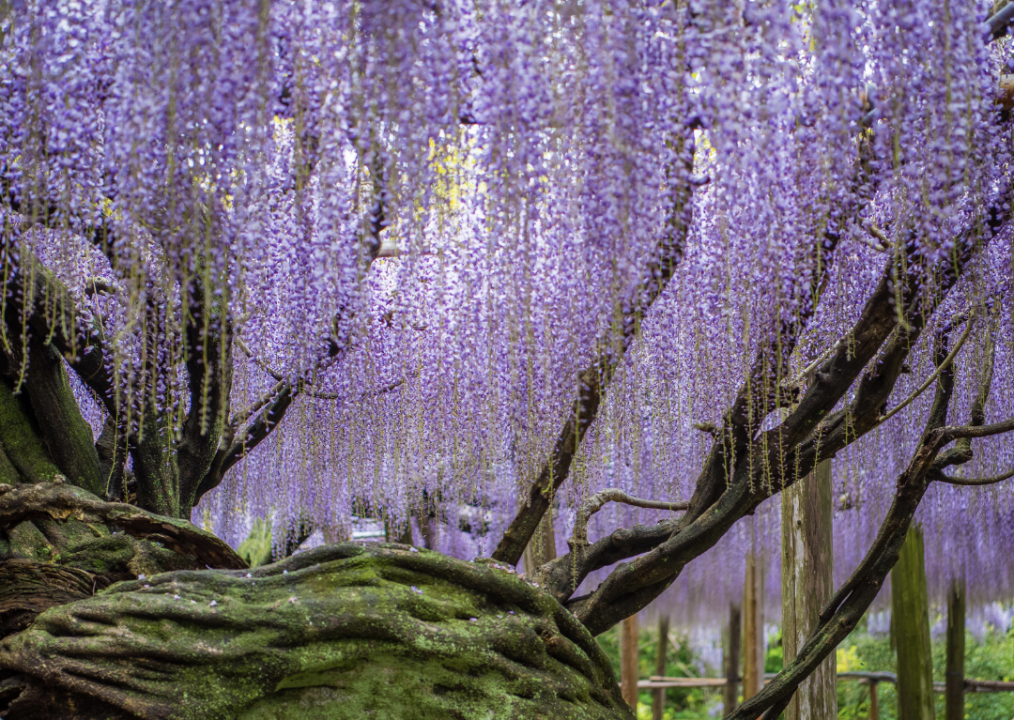 A relative of the pea, this purple flowering plant is beloved by the Japanese and is nowhere more celebrated than at the Kawachi Fujien—a private garden of over 150 trees created in 1977.

Entry to the annual Wisteria Festival, held in April and May, must be booked in advance. 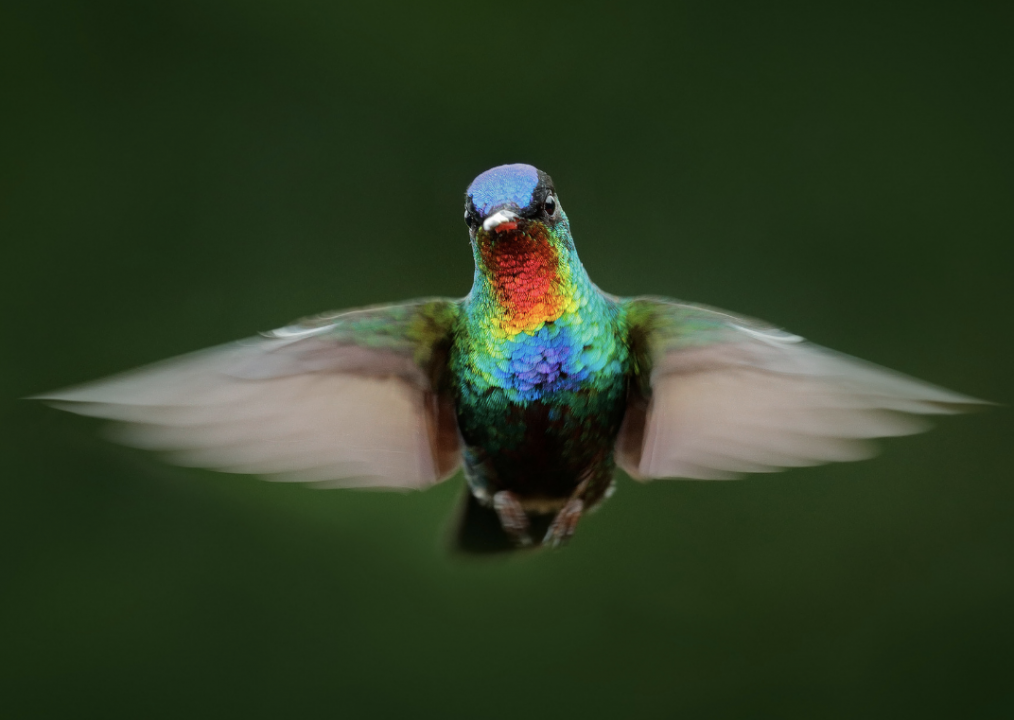 This startling image captures an iridescent fiery-throated hummingbird, native to Central America, as it hovers in mid-air. Taken head-on, the bird appears to meet the photographer's gaze. 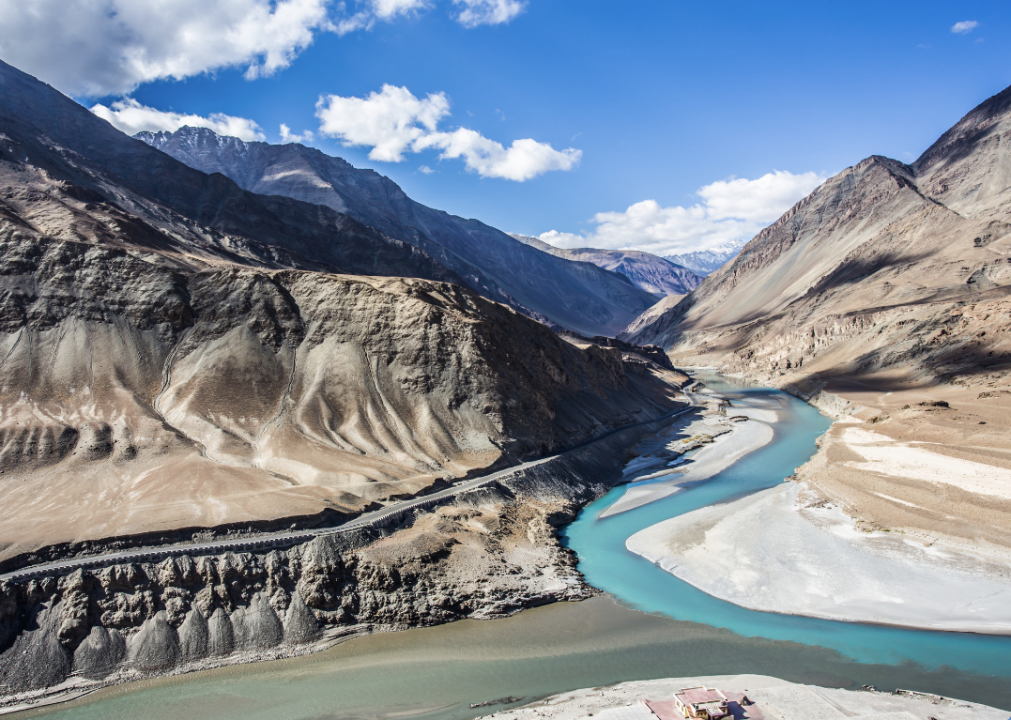 Adventurers en route to India's Himalayan monasteries are treated to this spectacular site in the Nimmu Valley, where the blue of the Zanskar River intersects with the celadon-hued Indus.

This increasingly popular spot is a day trip from the historic town of Leh. 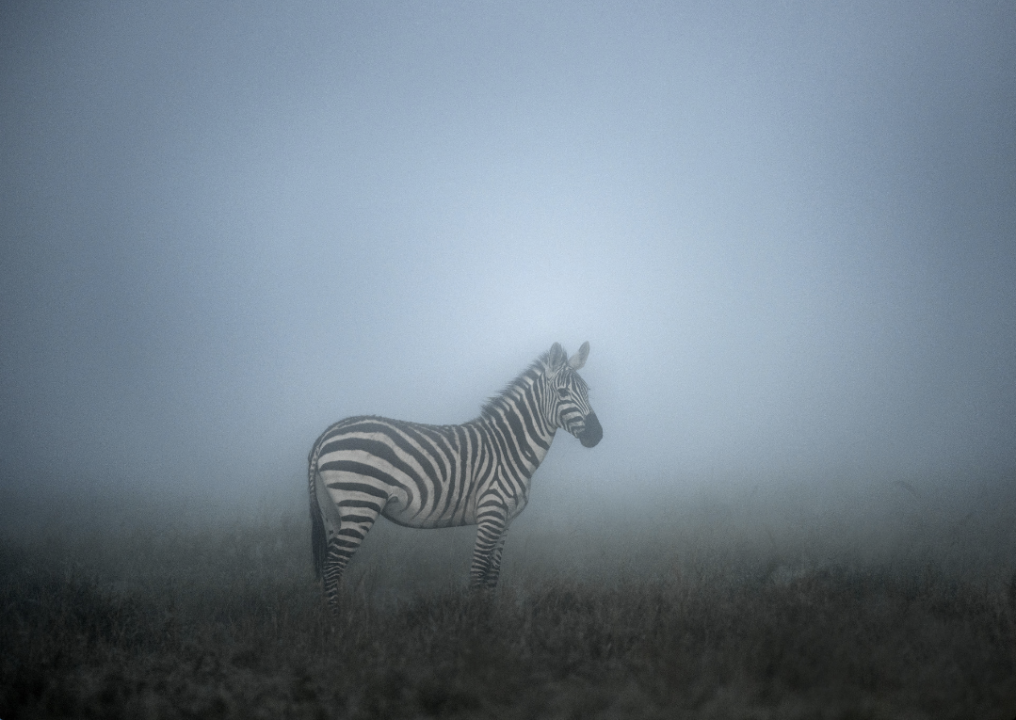 Zebra in the morning mist, Serengeti

The crossing of the Serengeti—undertaken annually by over 2 million wildebeests and zebras—is one of the oldest mammal migrations on Earth. This photo captures the moon in the luminescent penumbra stage over California's Joshua Tree National Park, just before a complete eclipse in May 2003. 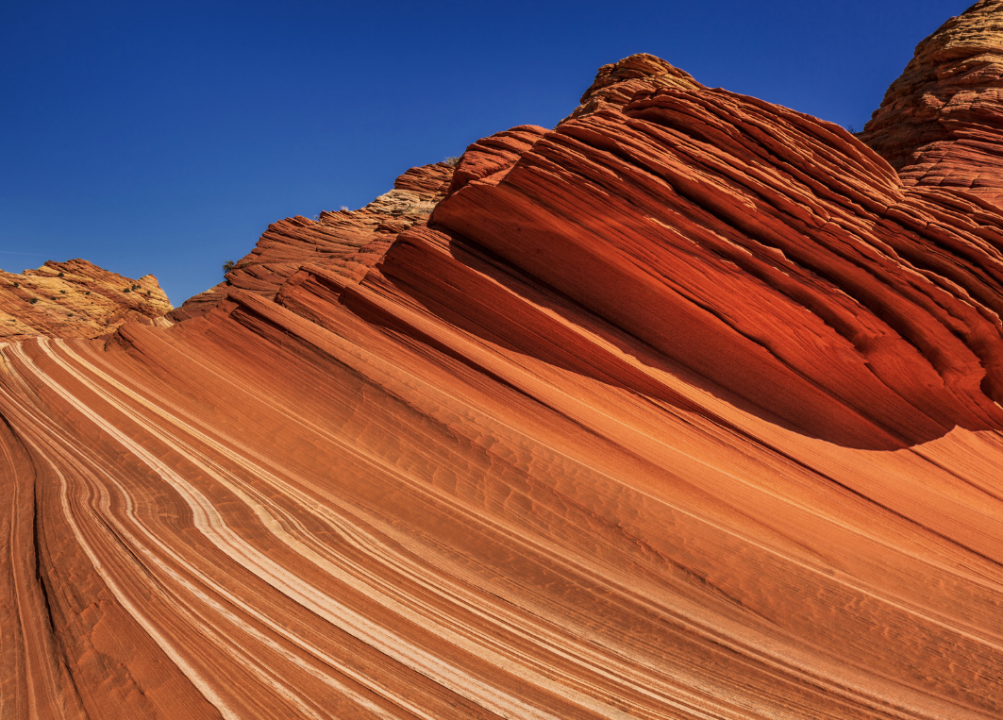 This rippling orange-red sandstone formation became an overnight sensation when it was chosen as one of the wallpapers offered by Windows 7 in 2009.

Located in the Coyote Buttes North Special Management Area of the Paria Canyon-Vermilion Cliffs Wilderness Area, potential visitors must apply in advance for a permit—awarded by lottery—up to four months in advance. 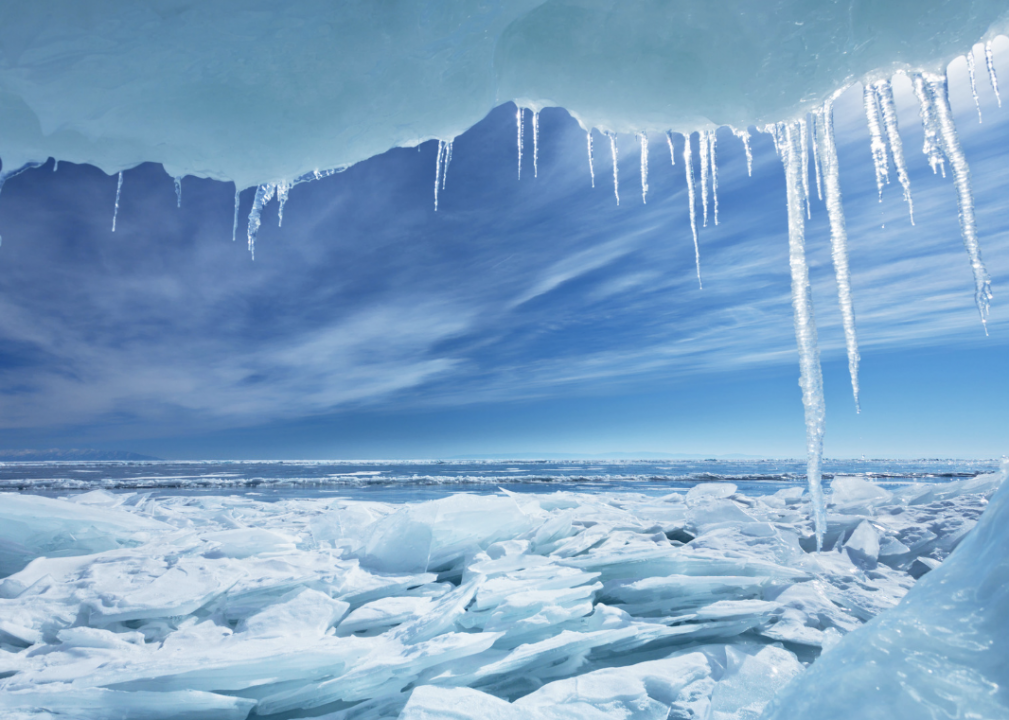 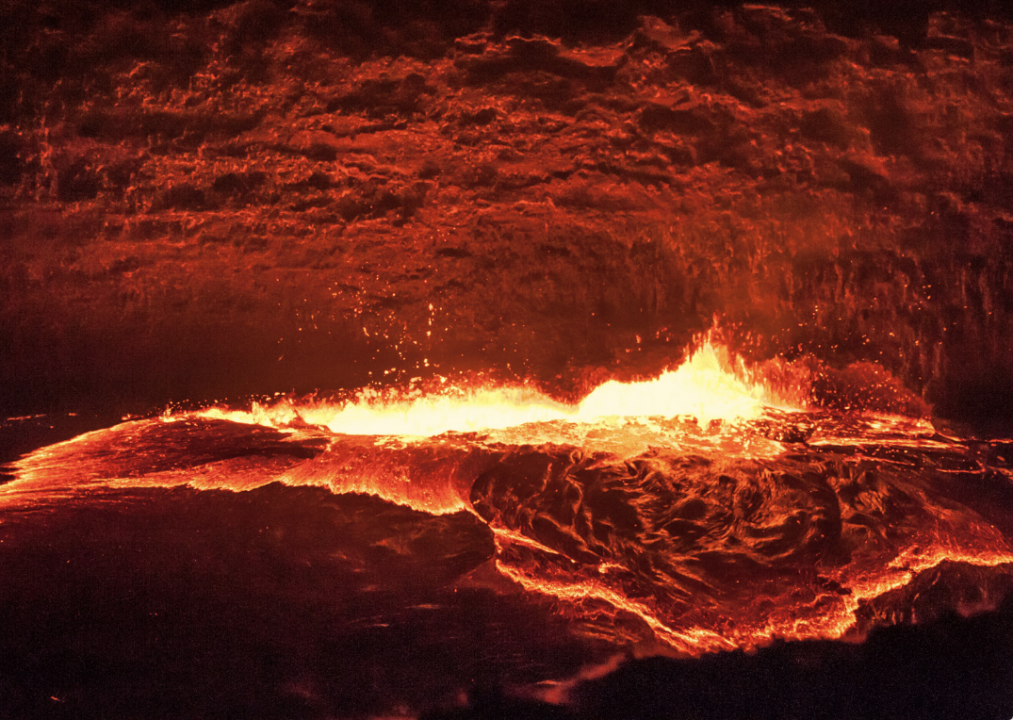 Just looking at this photo of the raging reservoir of lava within the active, 2,011-foot-high volcano in Erta Ale may be enough to induce a hot flash.

The level of the lake has receded in recent years, resulting in a cloud of thick smoke obscuring the molten pool from curious lenses. 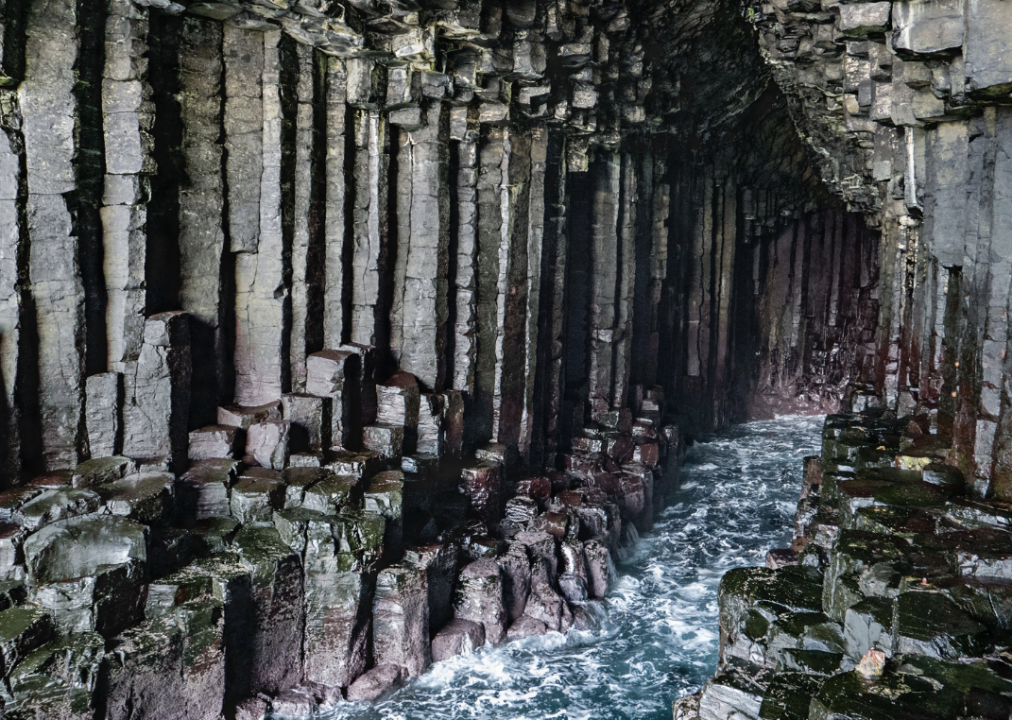 Located on the small Scottish island of Staffa, this sea cave is lined with polygonal basalt columns similar to those that compose Ireland's Giant's Causeway.

The 72-foot-tall sea cave runs 270 feet deep and can be reached by boat. 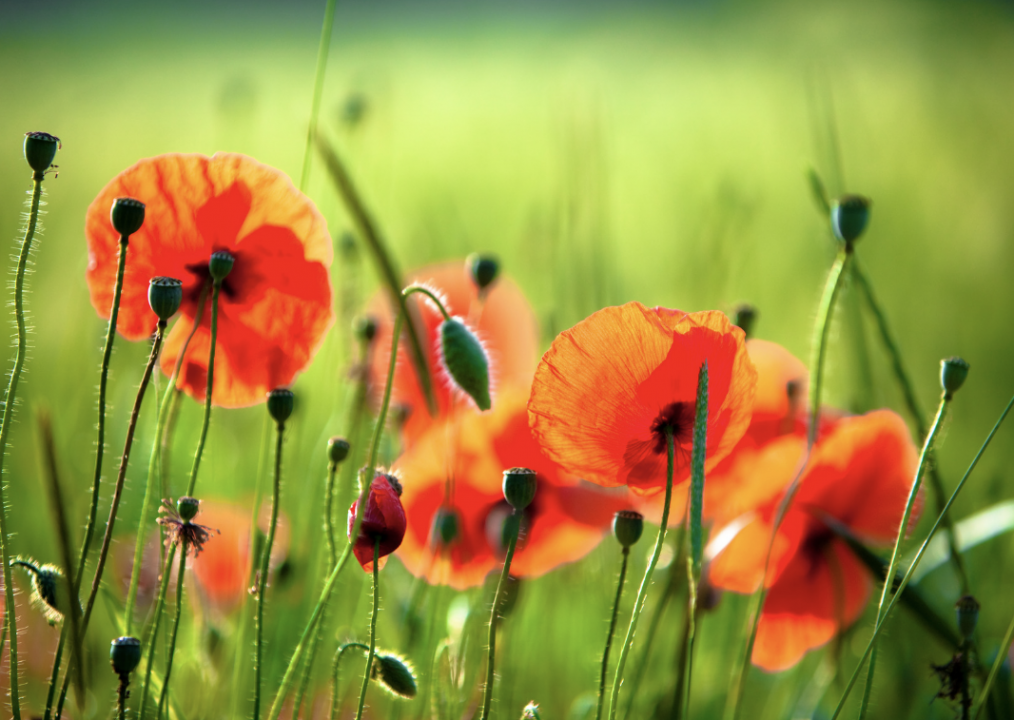 Each spring, wild poppies dot the rugged landscape of France's Dordogne region, sandwiched between the Loire Valley and the Pyrenees.

This incandescent photograph expertly preserves the fleeting beauty of these delicate blooms. 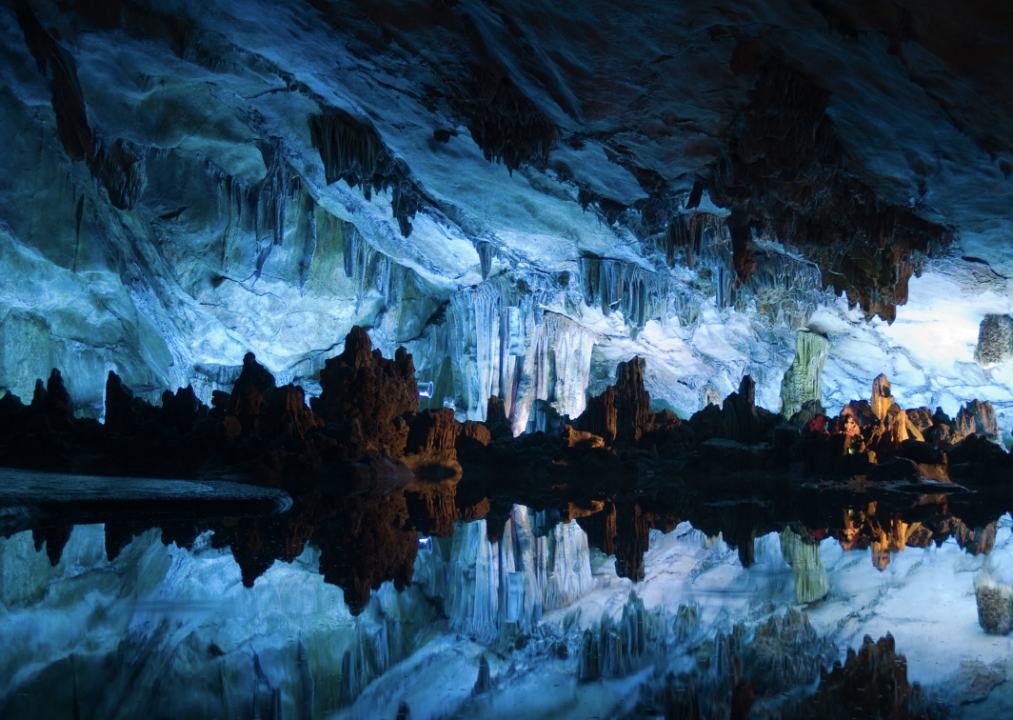 Discovered in the 1940s by Chinese refugees from the Japanese Army, the Reed Flute Cave in Guilin boasts a stunning array of stalactites and stalagmites.

Today, the cave's natural beauty is enhanced by hidden multicolored lights. Graffiti found within the cave, however, indicates that it was a popular destination as far back as the Tang Dynasty in the eighth century BCE. 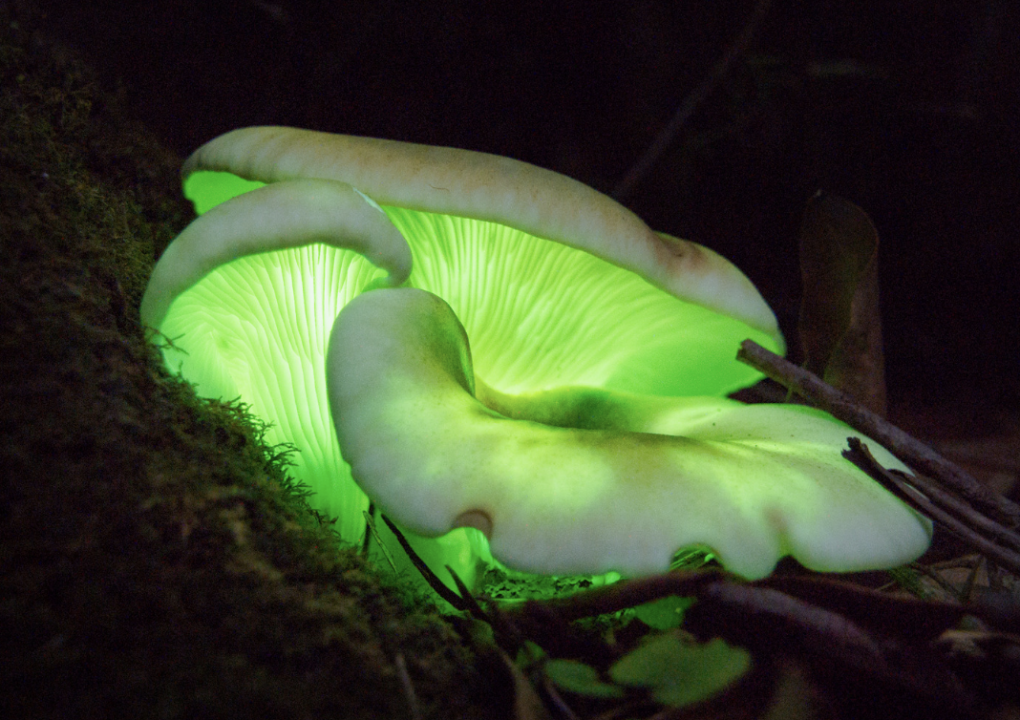 This intriguing ghost mushroom was photographed along a walking path in Mittagong, Australia.

Bioflourescent fungi derive their mysterious glow from a class of molecules called luciferins, which react when exposed to oxygen and enzymes associated with decay. Aristotle noted the phenomenon—which he dubbed, "foxfire"—back in the fourth century BCE.