It’s 5 p.m. in Miami. The air is balmy, the sky clear, and I’m gazing out the window while sitting in the red leather bucket seat of a white Porsche Panamera 2017, chatting with my very kind driver, as he speeds along the palm tree-lined I-95 Express. There’s no time to stop and check in to my room at South Beach’s Art Deco Delano Hotel, so I’ve come prepared, in a cocktail dress, black sandals and sunnies, for the welcome party on the mezzanine of the shiny, black glass Porsche Design Tower. Here, on the expansive terrace overlooking Miami’s downtown skyline backed by a coral pink sky, the world’s media, including journalists from Germany, Switzerland and New York, and executives from Dezer Development and Porsche Design Group, have gathered to celebrate the opening of one of the first towers in the world that allows residents to literally park theirs cars in their condo units.

When Gil Dezer, a prominent real estate developer whose family owns large portions of New York’s Chelsea neighbourhood, began to envision the structure that would come equipped with three elevators to sweep vehicles up 56 floors and potentially hold hundreds of vehicles in 132 units in the sky, he knew he would be met with resistance—from investors, from builders and architects—for this unconventional, James Bond-esque idea. So he knew he needed to approach an architectural firm that had as much vision, sophistication and design intelligence as the idea deserved.

Enter Porsche Design. An extension of the Porsche vehicle brand, the studio creates apparel, from sunglasses to T-shirts to carry-on suitcases, using the core philosophy, “that if you analyze the function of an object, its form often becomes obvious.” With branded real estate becoming the development trend of the moment, (Dezer Development is working on a Residences by Armani/Casa Tower adjacent to Miami’s Porsche Design, there is a Missoni Baia Tower and a Deepak Chopra branded Muse wellness tower going up in Miami), the recognized luxury name seemed like the perfect fit.

In a private tour of the tower, Gil and Roland Heiler, Managing Director of the Porsche Design Studio, lead our Champagne-sipping media group through the state-of-the-art gym featuring fitness equipment designed by Milon, a spa with a Vichy spray room and a community room complete with an auto racing simulation centre. Here, we are told that residents also have access to a wine storage cellar, a negative edge “Sunrise” pool, a private nightclub and a private restaurant.

But the pièce de resistance in the 641-foot building, which all of us get to experience (with requisite James Bond theme song playing on the stereo deck) is the patented “Dezervator” three-car elevator system. Seated in the back seat of a 2017 Porsche Cayenne in window-encased elevator, our group is seamlessly whisked up 56 floors to the penthouse suite at 800 feet per minute, while taking in glimpses of the Atlantic ocean through the tower’s glass partitions along the way. It’s hard to imagine that this exhilarating once-in-a-lifetime opportunity is just a regular part of the day for residents of the tower. 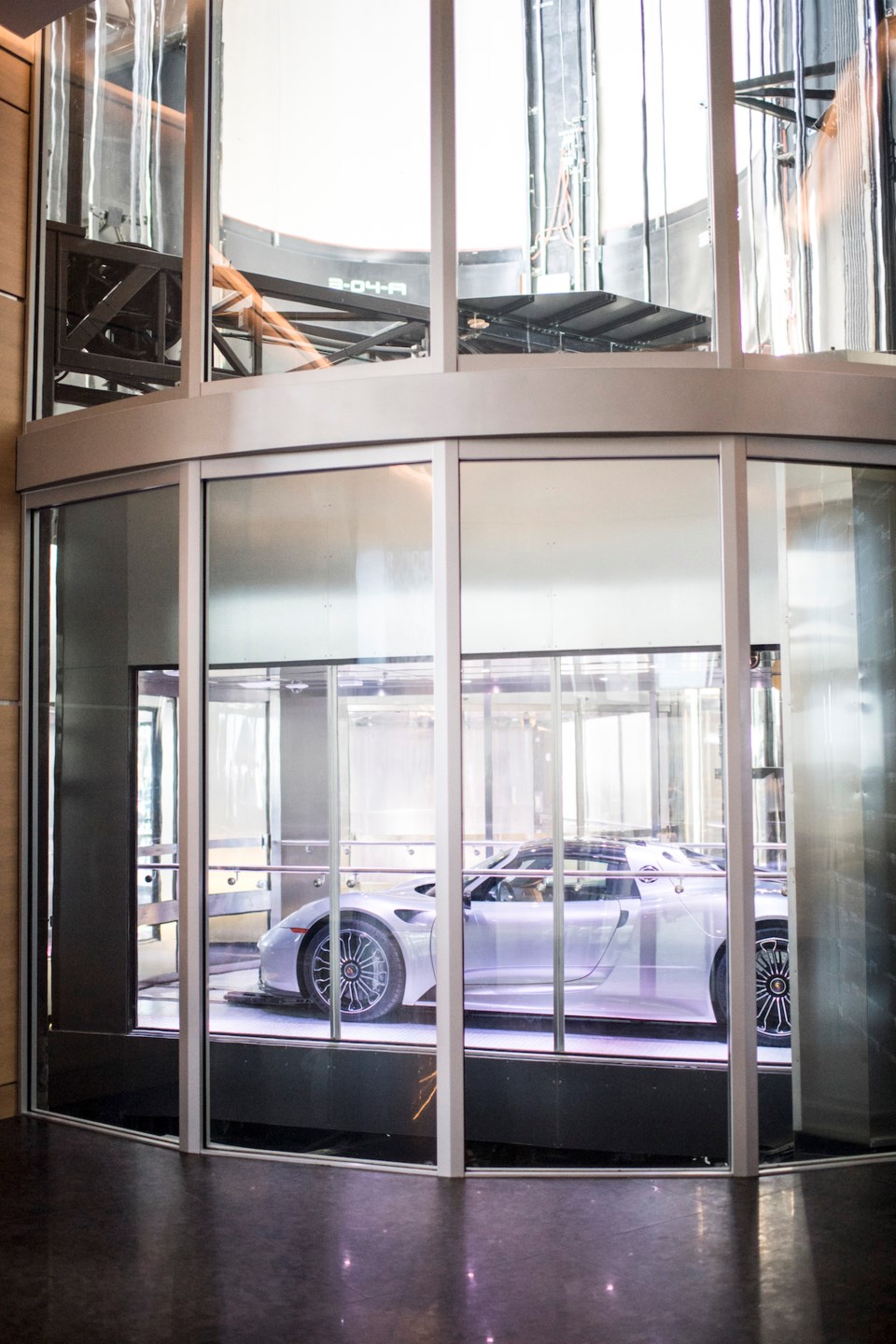 As one might imagine, with a typical car weighing about 5,000 pounds, creating such a feature was no easy engineering feat. “The big unknown in the design process was the car elevator. Nobody had ever done [anything] like that before. Once we had a clear idea how [it] would integrate in the building’s structure, everything else was part of a normal creative process,” says Roland. To ensure the safety of the complex structure, engineers created a nine-story working-model facility in Chicago to pre-test the technology before final installation. For peace of mind, the elevators are also built with a sensor technology with a light barrier for movement, plus smoke and sound detectors. 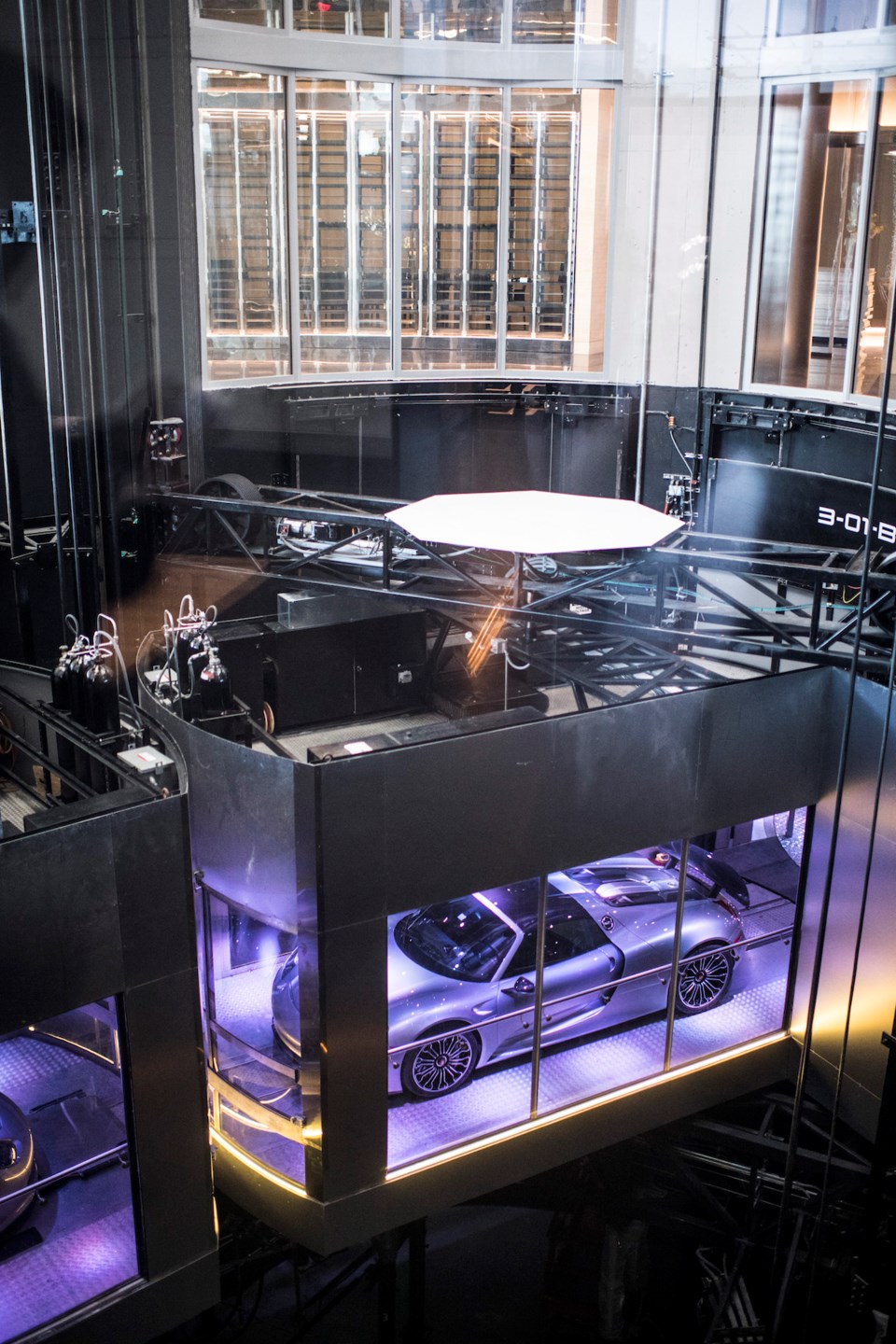 The condo units themselves, which range from one-bedrooms to two-floor duplexes, to a $32 million penthouse suite, are equally impressive. Each one is equipped with Miele appliances, $7,000 Toto toilets and terraces, some of which are adorned with private black-tile Infiniti swimming pools and outdoor kitchens. Floor-to-ceiling hurricane-resistant windows provide jaw-dropping panoramic ocean, intracoastal or city views. And don’t forget the view of your vehicle from the kitchen and living room area. “While an architectural trend is to hide parking garages and make them appear like they don’t exist, Porsche Design Tower Miami’s sky garage and state-of-the-art parking technology does the exact opposite, celebrating the vehicles as literal works of art where, in most units, a glass window between the living quarters and the sky garage allows residents to enjoy viewing their vehicles from the comfort of their homes,” says Gil.

Although Gil was unsure at first of how easy it would be to secure funding for the project, the success in sales quickly instilled confidence in the developer. “After opening the Porsche Design Tower Miami sales gallery, we received a $214 million construction loan from Wells Fargo in September 2013, at the time marking the largest loan for a single construction project in the Southeast in the post-recession era. We paid off the construction loan in December 2016,” he says.

The tower has attracted buyers from South America, Europe, the U.S. and Canada who are generally people, “seeking a unique level of exclusivity,” explains Gil. Without the need for valets, residents have the freedom to come and go without notice, a desirable scenario for celebrities, politicians and other folks looking for next-level privacy. An in-house car concierge ensures vehicles are kept in tip-top condition, helping with maintenance, tire rotations, washing and other services.

With this first tower providing a successful design template, Dezer and Porsche Design have plans for more similar structures, with construction of a 240-unit Porsche Design Tower starting in Frankfurt in 2018, and a third project in the works in Brazil.

At the Saturday night party to celebrate the opening of the structure on March 18, almost 1,000 of Miami’s who’s who gathered on the tower’s breezy seaside pool deck to hear a speech by Gil—and take in a surprise performance by Alicia Keys, a close friend of Gil’s who belted out three of her inspirational hits including “Empire State of Mind.” Her parting words, before sashaying off the stage under the starlit sky in a flowing orange gown? “I feel like this [tower] represents a dream come true, “Empire State of Mind” represents a dream come true … so to all you here tonight, may all your dreams come true.” Well said.

For information and pricing visit pdtower.com