Any home designed by the late, legendary Frank Lloyd Wright – pioneer of organic architecture – is a monument to modern living art. The Norman Lykes home, perched on a mountainside in stunning Phoenix, Arizona, is no exception.
Aug 22, 2018 3:39 PM By: Fiona Forbes 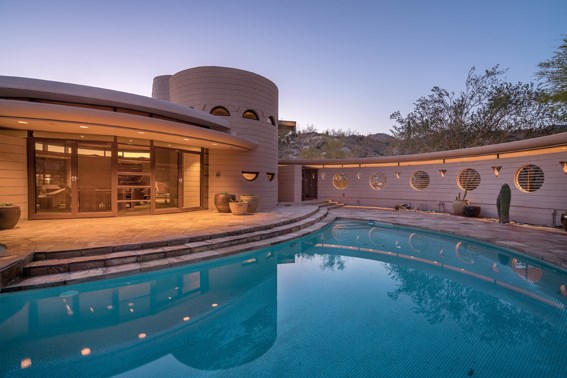 Any home designed by the late, legendary Frank Lloyd Wright – pioneer of organic architecture – is a monument to modern living art. The Norman Lykes home, perched on a mountainside in stunning Phoenix, Arizona, is no exception. Stepping on to the grounds of this architectural piece of history is like stepping into a parallel world made of circles.

The Norman Lykes house, famed for its circular design, hit the market a few months ago, and by-invite guided tours of the home are an opportunity to learn a bit of the history of this stunningly unique abode.

“This home is so unique because it is the last home Frank Lloyd Wright designed before his death in 1959, the same year he designed the home. It is also only one of 14 circular homes he designed in his lifetime,” explains listing agent Jack Luciano.

The Norman Lykes house was finally completed in 1967 with Wright’s former apprentice, architect John Rattenbury at the helm. True to Wright’s style, the house is nestled in the desert in such a way that it looks like part of the Palm Canyon landscape. The curved lines of the building are reminiscent of Wright’s most iconic structures at The Guggenheim Museum in New York City.

The home was originally built as a five bedroom for Norman and Aimee Lykes, and has since been renovated by the second and only other owner to date to a three bedroom, with all renovations approved by the Frank Lloyd Wright Foundation.

When queried why someone from Vancouver would be interested in this property (besides escaping the rain), Luciano says, “The Lykes home sits on one of the most beautiful hillside locations in Palm Canyon with unparalleled views of the Phoenix skyline and South Mountain range.”

This home is also located with access to both Scottsdale and downtown Phoenix, and is a short drive to Phoenix Sky Harbor Airport. (Last year, Phoenix clocked 100 days straight without rainfall.) Measuring in at just over 3,000 feet, the now three-bedroom, three-bathroom, curvaceous home is listed at  $3.25 million US – a steal when compared to the over-heated Vancouver market.

Walking through the front door, one can’t help but notice the low ceilings. Reportedly this has less to do with Wright’s disputed height (estimated between four foot 11 and five foot eight), and more to do with his distaste for wasted space. And the space seems to literally open up as you walk in.

A grand hallway leads in to the living room, with 180-degree windows showcasing those breathtaking views of Phoenix overlooking Palm Canyon. You can’t help but be blown away by the desert skyline and the picturesque sunset.

Stepping through the small, but functional galley-style kitchen you’ll find the pièce de résistance is the crescent shaped swimming pool – a must-have for any resident in the Arizona desert heat.

The house almost has the feel of a museum with all the original mid-century modern furniture still intact. In true Frank Lloyd Wright style, the house is filled with both form and function with the ornate wood detailing and built-in furniture storage throughout the structure.

The curved lines give the home a unique and futuristic feel. Owning this home would be like owning a piece of history and any architectural aficionado will appreciate that.

As Luciano says, “The buyer for this home will be someone with a great appreciation for Frank Lloyd Wright and his work. Someone that wants to live in an architecturally significant home with deep history.”

And what lover of mid-century modern architecture could hope for more?