Kids get cabin fever at Maplewood Farm during spring break
Apr 2, 2018 7:00 AM By: Maria Spitale-Leisk 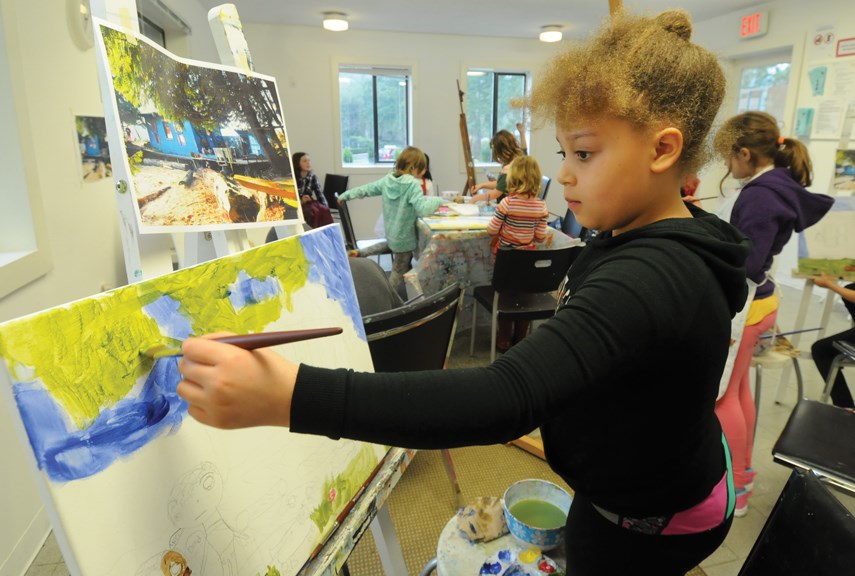 A fortunate group of kids spent their spring break inside a colourful rectangular box in a pasture at Maplewood Farm.

A replica skeleton key fits the lock on the bright blue door with the fire engine red frame.

One by one, in the pouring rain, the youngsters file up narrow wooden stairs and into the 90-year-old, diminutive Blue Cabin with its curved roof and red shutters.

On this day they sit in the damp air on weathered floorboards, lightly restored, and breathe in the history of the one-time squatter’s shack.

After learning of the Blue Cabin’s long and storied history on the Dollarton foreshore, Evanger couldn’t resist centring a series of spring break camps on the last remaining vestige from the squatter era.

For the better part of last year, a couple from Mayne Island gave the Blue Cabin a gentle makeover at Maplewood Farm, as part of a more than half-million-dollar restoration project helmed by the Grunt Gallery in Vancouver.

The couple made mental and physical notes of the original blueprint before pulling out each of the eccentric pieces in preparation for the cabin’s light exfoliation.

They later put the puzzle back together.

Digging under the floorboards, the couple discovered frayed posters, dating back as early as the 1920s, advertising boxing matches, vaudeville acts and other events in Vancouver during that time.

Now that the cabin’s restoration is complete there’s a window of opportunity to bring a younger generation into the space.

Eventually, the cabin will become part of a floating artist’s residence, but the committee behind the project is still trying to secure a barge.

Evanger saw his opening to bring life back into the Blue Cabin during spring break.

“I had been following the story, and I was so engaged,” says Evanger, of the efforts made to salvage the retangular relic.

Evanger reached out to Blue Cabin Committee director Marlene Madison and they brainstormed over a cup of coffee during a snowstorm in December.

“And we both thought that it would be a great idea to engage the next generation and give a nod to the Blue Cabin,” explains Evanger.

Back at Maplewood Farm it’s 9 a.m. on the second Monday of spring break.

Inside the cabin the students are learning its rich history from Madison, who uses an iPad to show them a snapshot of an artist couple’s colourful life in their humble abode.

For 50 years Al Neil and Carole Itter savoured a life of solitude on the Dollarton foreshore adjacent to Cates Park – until their cabin was removed in 2015 to make way for a residential development.

Above the youngsters a strand of bare lightbulbs drapes down from the ceiling and casts shadows in the cabin. Madison tells them it was built around the time their great-grandparents were born.

She delves into the squatter era and talks about Dollarton’s famous inhabitants, including poet Malcolm Lowry.

“And he wrote a really great book called Under the Volcano, says Madison.

A young camper, Bella, immediately pipes up: “My grandpa has it,” she informs the group. “My grandpa bought it because his dad bought it for him.”

Madison asks the youngsters how they think it would feel to live off-the-grid in a cabin, rather than in a house.

“Was that the bathroom?” a boy asks, pointing to a corner. He learns from Madison there was no toilet inside the cabin.

“It was up on the mountain and it wasn’t quite an outhouse – it didn’t have walls, it was just in the woods.”

The boy pictures the inconvenience of it all. “If you had to go to the bathroom in winter, you have to get your snow gear on,” he says.

Madison points to where Neil’s upright stood, a faint white outline of the keys splashed on the wall. He painted around the piano at one point, leaving another mark on the cabin.

Neil was a jazz artist and would hold court every night at the Cellar club in Vancouver, the students learn. The couple, meanwhile, would collaborate on art assemblages, using found objects on the beach.

The students might have dismissed the dime size hole in the floor had Madison not told them the restoration team found an old newspaper dating back to the 1930s stuffed in the hole. Many hidden gems were found during the facelift.

A large moth flutters around the cabin. The kids are intrigued, but Madison isn’t fazed. She says there’s a mouse sleeping under the cabin – which elicits a shriek from one of the young campers.

Madison switches gears and talks about the Blue Cabin’s future and how it will be floated back and forth between North Van and Vancouver and attract artists from around the world. Next to the cabin on the barge will be a tiny house for the artist to live in comfortably.

And with that the budding artists are off to Maplewood House to put paintbrush to canvas to colour in their interpretation of the Blue Cabin.

Campers in another session will recreate the vintage 1930s posters found in the cabin’s subfloor and open an window to the past.

The Blue Cabin Committee is looking at offering more camps this summer through the North Van arts council and other artist organizations.