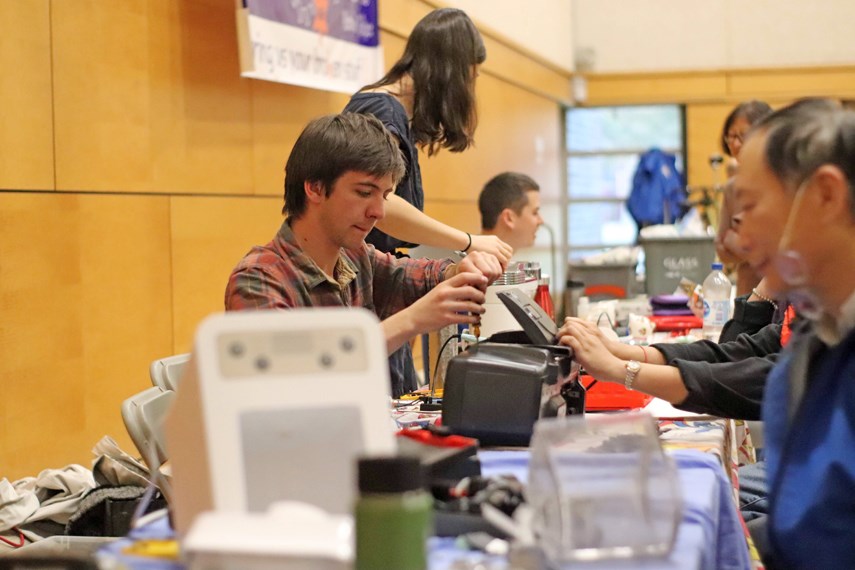 An event hosted by a handy group in West Vancouver is aiming to give a second chance to broken or busted household items.

A repair café, hosted by MetroVan Repair Cafés, is setting up shop in the parking lot west of the West Vancouver Memorial Library on Sept. 26 for a one-day event.

The group is encouraging people to bring down their broken small appliances, textiles, bikes, jewelry, computers, small furniture, and other gadgets and gizmos, between 10 a.m. and 1 p.m. on Saturday.

“We generally welcome anything that’s small enough that it can be easily carried. We’ll take a look and try and fix it,” said Yining Sun, who co-founded MetroVan Repair Cafés last year. “We have a group of very skilled repair volunteers helping us out.”

Sun helped found the group last year. In its first year MetroVan Repair Cafés hosted five cafes with more than 130 volunteers who took a shot at repairing more than 370 items.

Repair cafés truly sprouted up as a popular worldwide phenomenon 10 years ago, after a Dutch environmentalist observed how many of the items that people in the Netherlands were throwing away could have been easily fixed. She reportedly set up the first formal repair café in Amsterdam around 2009.

“We’ve called for people that like tinkering, opening things up on their own, and I think they also believe in repairs as opposed to just throwing broken things away,” said Sun, who added that, crucially, services are always offered free of charge at repair cafés. “That was the idea: to gather a group of volunteers and have neighbours helping neighbours fixing their household items.”

Sun said that traditionally people bring in a lot of small kitchen appliances, such as toasters, mixers and rice cookers.

With more people trying their hand at home cooking in the era of COVID-19, she said she expected to see even more kitchen appliances than usual at the upcoming event.

“I’ve been doing way more home cooking and I could see us having a pent-up demand of broken-down household appliances. Or people have been using their bikes more often and they probably need some work done,” said Sun.

In order to facilitate a safe number of visitors during the pandemic, MetroVan Repair Cafés asks people interested in attending the repair café to register on Eventbrite.

“This is more of a public awareness campaign. We want people to know that repair is possible and fun,” said Sun. “I think the true spirit is also promoting an inclusive community – interaction between the community members.”

Time Traveller: Here's how the Jolly Jumper was invented in North Vancouver
Apr 18, 2021 9:05 AM
Comments