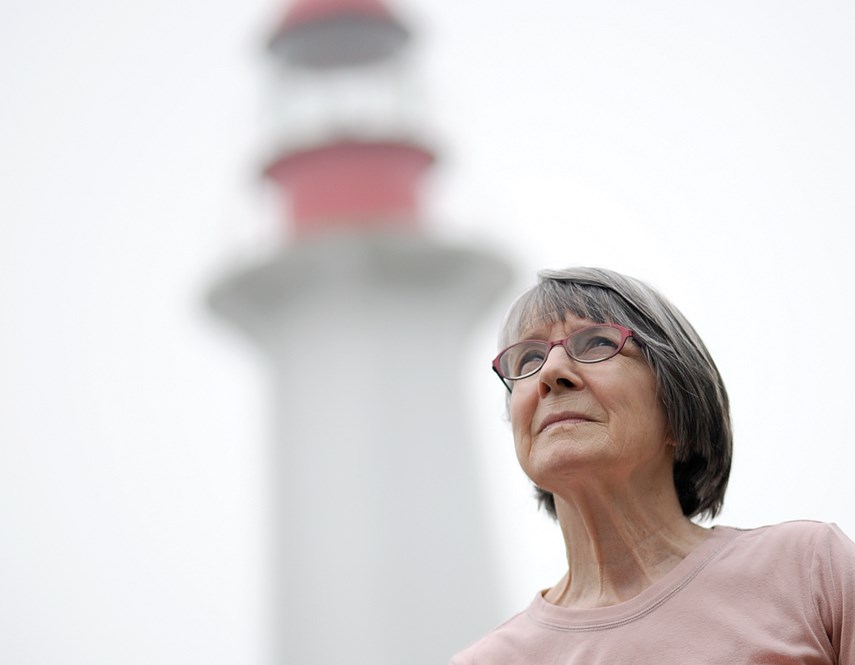 While combating isolation has been a priority for everyone doing their best to navigate a pandemic, there was once a time, call it the era of the lighthouse keeper, where seeking out isolation was exactly what Don and Elaine Graham were looking for.

“If you want to advance as a lightkeeper you have to go into isolation – it’s what they say – to one of the remote stations, like an island,” says Elaine.

The Grahams first came to Point Atkinson Lighthouse in 1977. While the lighthouse, a brilliant white and red station which can be reached by hiking Lighthouse Park’s valley trail in West Vancouver, would eventually end up being their home for the next four decades, they didn’t stay long that first go-around.

Point Atkinson is what’s referred to in the lightkeeping community as a “gentlemen’s light,” explains Elaine. The lighthouse, at least as it now stands, isn’t located on some distant location far removed from society – it’s in a park, in West Vancouver, and if you were stationed there odds are you could access the city in your downtime, if need be.

“The more inaccessible they are, the higher the rating and pay,” says Elaine.

After six months at Point Atkinson, the couple, who were in their late 20s and early 30s at the time, decided to “go into isolation” in order to advance their careers and seek out adventure.

They spent the next three years at Lucy and Bonilla islands, respectively, in the Prince Rupert region.

Both islands were beautiful, remembers Elaine – the kind of locales that might spring to mind when trying to conjure an image that encapsulates British Columbia’s splendour.

“Prince Rupert had wonderful sandy beaches. It was quite a benign weather environment compared to Bonilla Island, which is further south,” she says. “Bonilla was much more rugged, and the weather was harsher.”

Bonilla Island is also just over three kilometres long. It’s tiny. With Don working as a lighthouse keeper on Lucy followed by Bonilla, Elaine and Don, with their two young boys in tow, had found their isolated situation, for the time being.

“They always wanted someone with a stable family situation,” says Elaine, of the government’s desire to hire the right person for such a remote, isolated role. “If the man had a partner and/or children, then they thought they would stay longer.”

The opposite ended up being true for Don and Elaine. After a few years removed from an actual physical community, they worried how living on a remote station would affect their kids, who had to do school by correspondence.

“We decided at the point where Don was offered a chance to be a senior keeper at Ivory Island that we didn’t want that because it would mean three or four more years for our boys to be isolated,” says Elaine.

The family returned to Point Atkinson, where Don took up a job as a more lowly-paid assistant lightkeeper but was afforded the luxury of being able to send their kids to school.

The Grahams started their long tenure at the West Vancouver lighthouse station and park lands in 1980. After 40 years, Elaine is retiring as caretaker of the park and light station at the end of the month. (Don passed away in 2003.)

As Elaine packs up the bits and pieces of the coastal park life she’s lived the past four decades, she reflects on how the light station and the park which houses that station have changed, as well as the numerous roles she’s served throughout a long career.

On the lighthouse side, Elaine was never officially a lighthouse keeper like her husband, though she did do relief work over the years, including giving the customary weather reports every three hours.

“I’d keep watch out on the ocean,” she says.

The role of a lighthouse keeper is diffuse, and could include anything from sounding fog alarms, maintaining radio communications, offering search and rescue assistance and, of course, maintaining or “keeping” the light – shining the powerful beacon on coastlines, reefs and shallow areas to guide ships through safe passage.

According to Fisheries and Oceans Canada, the country is home to 750 lighthouses, some functional and some serving as scenic landmarks. The government continues to operate 51 staffed lighthouses across the country, including 27 in B.C.

In 1996, two years after Point Atkinson was designated a National Historic Site by the government, the station was automated. The Grahams came off the lights and Don’s job was immediately terminated. But their journey didn’t end there.

As Elaine points out, it’s the job of a lightkeeper to be self-reliant and troubleshoot, both qualities the couple possessed in spades. Those qualities served Don well when the District of West Vancouver made him the park groundskeeper and caretaker of the lighthouse station lands after the beacon was automated. Elaine continued in that role after Don passed away.

But ever since she got to Point Atkinson in 1980, and as Don carried on his duties as assistant lighthouse keeper, Elaine was drawn to the amazing natural beauty of the park.

While her stories of living amid the fascinating world of lightkeeping are always compelling, arguably her lasting legacy at the lighthouse station lands and park are for her educational work.

Elaine spent years developing educational displays around the park, leading guided tours and walks, and even working with the Girl Guides year after year to develop a nature room.

“I started to make displays, seasonal displays, of what was going on with nature,” she says, in an effort to help students learn about the “different layers of ecology of the park.”

Elaine has been a director of the West Vancouver Historical society, and in 1998 co-founded the Lighthouse Park Preservation Society.

To this day, the preservation society continues to work to protect the area’s natural integrity, prevent development encroaching on the park, and to promote public awareness of the park’s striking features.

“She is renowned for hard work and diligence, both as a steward of the park, and her ongoing efforts to advocate for and raise public awareness about the heritage and ecology of this gem of a park,” said Donna Powers, spokeswoman for the District of West Vancouver. “The District of West Vancouver will continue to work with the Lighthouse Park Preservation Society and the West Vancouver Historical Society to promote education and awareness, as well as park stewardship. The district is currently reviewing and assessing next steps to ensure the continued care and maintenance of the lighthouse station lands.”

Elaine says she was moved to help start the preservation society after a film crew was granted permission to shoot on site for a period in the ’90s and, while showing a group of Girl Guides around the park one day, they were miffed by the sights and sounds of lights, cameras and action encroaching on the natural setting.

“The Girl Guides thought, this isn’t what the park’s about. Some of those people, we got together and we formed the society,” she says.

Elaine naturally feels bittersweet about leaving the lighthouse and the park behind. It’s been her home for decades. But it was time to retire and move on to the next adventure, she says. The beauty of the coastline and the magic of the lighthouse and park lands will be with her always.

“I just feel lucky to have lived in such a beautiful place. I absolutely love the park,” says Elaine. “I’ve spent half my life here now.”