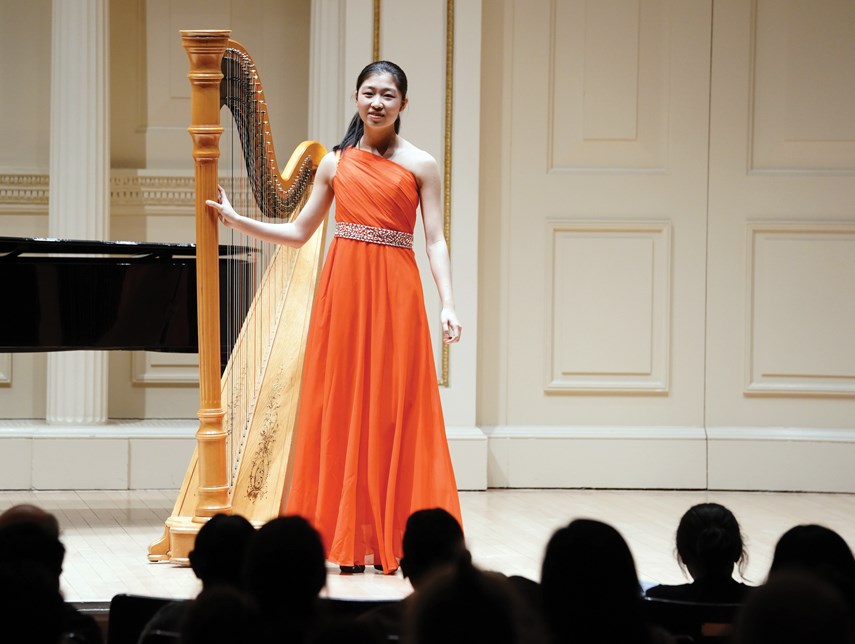 “I won the first prize of a competition called The American Protégé Competition of Romantic Music,” Qin tells the North Shore News weeks after plucking her harp strings in front of an enthralled crowd at the 2,800-seat concert hall.

“Previously I had the chance to perform at several venues here in Vancouver, including the Chan Centre and the Orpheum Theatre, but I never imagined I’d play at Carnegie Hall – it has such a big name, it’s such a wonderful place,” says Qin.

The American Protégé International Competition of Romantic Music is open to instrumentalists of all nationalities and countries, with participants required to submit video or audio recording materials for their audition. Qin placed first in her age category and was invited to perform her chosen piece – Debussy’s “La fille aux cheveux de lin,” or roughly translated, “The Girl with the Flaxen Hair” – at the end of March at Carnegie.

Although Debussy, a French composer often credited as among the very first impressionist composers, originally wrote the approximately two-and-a-half-minute composition for piano, Qin performed the piece on her instrument of choice, the harp.

“It was really exciting the whole time I was there, and it was absolutely wonderful to be on stage. The sound was so beautiful. I was enjoying playing music at that moment, everything was so nice,” says Qin. “The Orpheum is also quite large – but Carnegie Hall is something else.”

Qin notes that before performing, she waited backstage and met a number of her peer musicians who were also making their Carnegie debuts and the group chatted, shared stories and generally quelled each other’s nerves about performing.

Born in Beijing, China and classically trained on the piano since the age of four, Qin became enamoured with an ancient Chinese instrument called the Konghou at the age of nine, after she’d moved to San Jose, Calif.

After moving to Canada in Grade 8 and finding it difficult to lock down a Konghou instructor, Qin made the not-so-difficult switch to the harp. “It definitely helped because they’re very similar,” says Qin.

Over the past few years, Qin has won multiple awards for her harp playing, including a first prize win at the 2018 Canadian Music Competition, and a second place finish in the Bainbridge Symphony Orchestra Young Artist Concerto Competition held in Seattle.

While Qin is at this point accustomed to performing in front of big crowds, her musical ambitions skew just as much toward local initiatives as they do to playing grand stages.

Besides performing at Carnegie, she’s just as excited talking about the Music Connect Project, an initiative Qin started as part of the Vancouver Young Artist Society, where a group of passionate volunteers perform outreach concerts in various communities. The goal of the project is to connect communities, embrace diversity and ultimately bring people together, according to Qin.

“I came from a global background. I never really stayed in one place. I was constantly moving and also being in new environments,” she explains, adding that when she started attending high school in West Vancouver she had the desire to help make other international students’ transition to Canadian life as welcoming as possible.

“When I saw them I was reminded of myself being in that situation, the first time coming into a new place, a new environment, with new coaches, and having a bit of nervousness. I thought music could play as a universal language to serve to connect those people and connect the communities and connect the different cultures.”

Armed with a battalion of student and young artist volunteers with musical chops in a variety of instruments, Qin says the group has performed about 10 concerts so far with the goal “to perform 100 concerts in 100 communities.”

Of those Music Connect Project concerts, several have been at libraries and seniors’ residences or care centres on the North Shore, she adds. “It’s a really nice way to communicate,” says Qin. “We would love to have more volunteers and young artist to join us.”

Those interested in the Music Connect Project are encouraged to visit vanyas.org.

With Qin entering Grade 12 next year and her musical future looking bright, she says she plans to continue pursuing music and harp on the worldwide stage as a performer and at the local level as a volunteer.

If she keeps practising, maybe she’ll even get to play Carnegie Hall again someday. “That would be exciting,” she says.