In 1902, Peter Larson opened the Hotel North Vancouver on Esplanade shown here in this early picture postcard. The space comprised a resort hotel, a pavilion, and lush grounds.
Aug 16, 2020 8:30 AM By: North Shore News 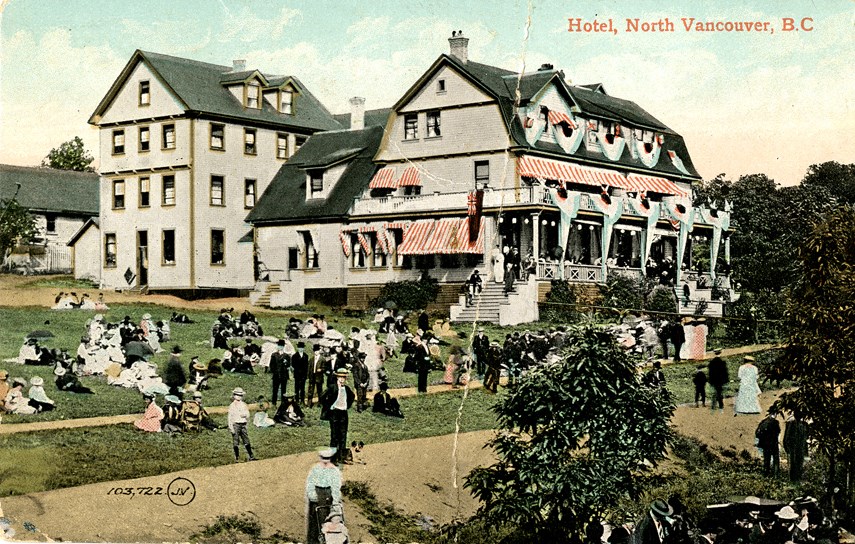 The space comprised a resort hotel, a pavilion, and lush grounds. It became the focus for the growing Lower Lonsdale community and a holiday resort for visitors from New Westminster and Vancouver.

An advert for the hotel in a 1908 edition of The Express newspaper reveals that room rates were “$2 per day and up” and there were “special rates for families and regular borders.”

The hotel bar was one of the most popular meeting places on the North Shore and before a permanent movie theatre was built here, Larson’s Pavilion held a weekly “moving picture show” one night a week “during the long winter months.”

The pavilion was also a popular spot for dances, concerts, picnics, weddings, and celebrations. Dominion Day (later known as Canada Day) celebrations took place on the grounds each year with a barbecue, games and activities, and a display of fireworks. Sadly, the “staycation” fun ended in 1929 when a fire destroyed the hotel and pavilion.

For more information about the history of the North Shore and to learn about the new Museum of North Vancouver opening in late-2020, visit nvma.ca and sign up for the museum’s e-newsletter at bit.ly/35MWr83.

Currently, the Archives of North Vancouver at 3203 Institute Rd. in Lynn Valley is open by appointment only. Contact: archives@dnv.org