Ring a bell on Christmas Eve to join a worldwide chorus

North Vancouver organizers invite everyone to join the Jingle at 6 p.m. Dec. 24

The coronavirus pandemic may keep loved ones apart this holiday season, but a North Vancouver woman is hoping to bring a touching Christmas Eve campaign to the North Shore that will unite us all for a few magical, musical moments.

The Worldwide Christmas Eve Jingle is a simple idea that started with one woman in a small town in England and has since spread across the Earth. On Christmas Eve, at 6 p.m. local time, families around the world will stand on their front steps and simply ring a bell. Organizers are hoping that the sounds on that still winter night will travel all the way to the North Pole to help guide Santa on his way. But more than that, the sound will lift the hearts of those near and far who are doing their best to keep the Christmas spirit alive in these very challenging times.

That is what Laurel Gurnsey is hoping to bring to North Vancouver. She read about the campaign, started by Mary Beggs-Reid in Harrogate, North Yorkshire, and decided to bring the bells here to the North Shore. Gurnsey enlisted helpers to spread the word on her street with a COVID-safe mailbox flyer campaign, and more than 20 families have been notified in her neighbourhood on the 600 block of East 5th Street in the City of North Vancouver.

On Christmas Eve, at 6 p.m., families all along the block will step out of their houses, ring a bell and then sing five socially distant Christmas carols.

“It’s a neighbourhood choir that is following all the rules,” said Gurnsey, adding that she’s hoping it will bring a sense of comfort and community to people who may not be able to celebrate with their families this Christmas. “If they’re singing with the block, if they’re ringing bells with the block, they’re not going to be alone, which is kind of a neat feeling.”

The Christmas carol playlist, which will be boosted with the help of songs playing on a bluetooth speaker, will start with ‘O Holy Night.’ It’s a song that suits the occasion rather well, said Gurnsey.

“It has a line in it: ‘the weary world rejoices.’ We figured that was perfect.”

While the bells and carols will spread goodwill throughout their block, the campaign is a powerful reminder that people around the world are fighting the same fight, said Gurnsey, adding that she personally has friends in Australia, Italy, England and the United States who will be doing the exact same thing at 6 p.m. on Christmas Eve. The original Facebook group for the campaign, created in late October, has more than 400,000 members.

“It’s the best kind of viral – it’s not the scary kind at all,” said Gurnsey with a laugh. “We’re thinking at night, when there isn’t a lot of traffic noise, the sound of the carols is just going to spread in the night air.” 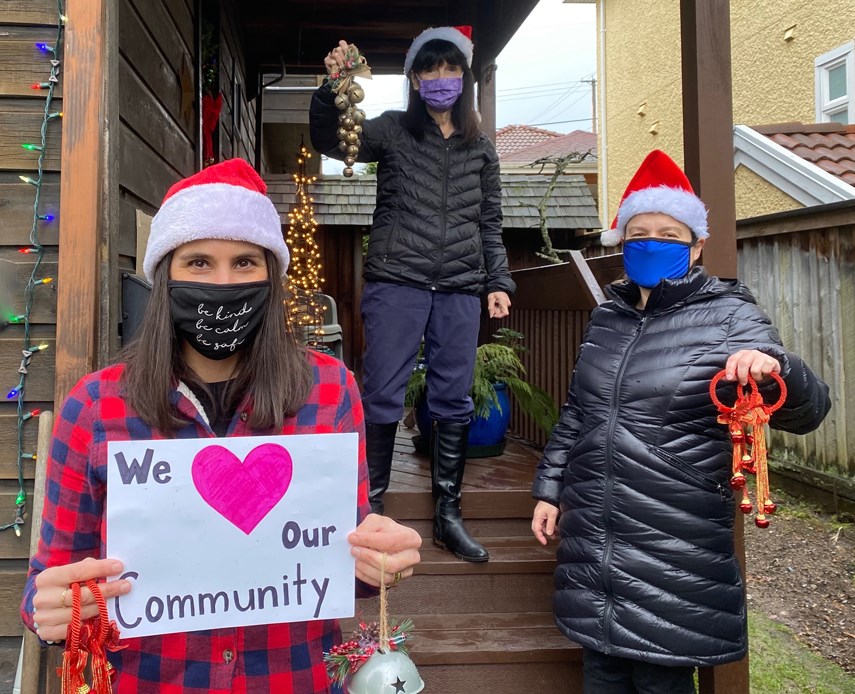