Depending on where you live on the North Shore, there are different requirements about removing snow

Along with the beautiful, white blankets of snow that cover the North Shore every winter, in tandem we also get the fun task of cleaning up and removing it from our sidewalks and roads.

As we have multiple governing bodies across this great winter wonderland of ours, sometimes the bylaws and regulations of snow removal can be confusing.

Here, we’ve compiled everything you need to know about removing snow on the North Shore:

Residents and businesses are required to clear ice and snow from sidewalks and apply salt or de-icer around their property within 24 hours after the snow stops falling.

For those businesses and residents that don’t clear it within the regulated period, a fine of $100 might be handed out.

However, the city said it doesn’t often happen.

“As it is usually a short-term event, few tickets have been issued. We have had four snow clearing files over the holidays,” the city said to North Shore News. 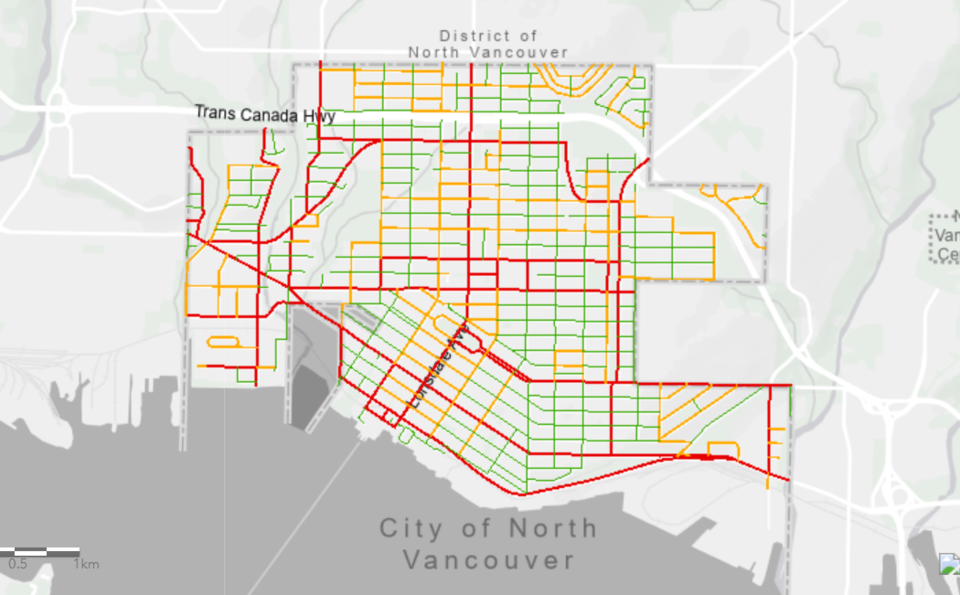 The city prioritizes snow clearing efforts using a system determined by use and needs.

Priority 3: Once conditions have stabilized, and first and second priority routes are under control, crews will attempt to clear local streets.

“City crews also clear multi-use pathways and trails on a priority basis to provide safe alternative ways for people to get around. Additionally, sections of trails, sidewalks and pathways leading to schools (ahead of school days) are cleared.”

By bylaw, owners or occupiers of commercial, industrial or multi-family dwellings in the District of North Vancouver are required to clear their sidewalks and footpaths bordering the property of any snow or ice.

"Following updates to the Street and Traffic Bylaw, as adopted by Council, District residents are now responsible for clearing the sidewalks bordering their property by 10am after a snowfall," a district spokesperson told North Shore News.

"Clear sidewalks means that walking is safe and accessible for everyone in the community, but especially for kids walking to school, parents with strollers, or for people who use devices like wheelchairs or scooters."

The district also encourages residents to help neighbours out, and buddy up with those who might not be able to clear snow away themselves.

Snow removal priorities in the district have been determined by public input, consultation with the North Vancouver School District, council workshops, TransLink, and the Ministry of Transportation and Highways.

"When snow falls or icy conditions are forecast, our crews work hard to make sure residents can safely get to where they need to go, whether they're driving, walking, riding or taking transit."

Priority 2 streets are routes leading to schools and collector streets, which move traffic from local streets to arterial roads. Once conditions have stabilized, and first and second priority routes are under control, crews will attempt to clear local streets, the district told North Shore News.

District crews work with emergency crews on an on-call basis to clear the way for ambulances, police vehicles and fire trucks.

The district notes that it’s important to be ready for any forecasted snowfall, by clearing storm drains and leaves and debris from around your property.

Property owners then have 24 hours to clear snow from sidewalks around businesses and residences; however, not doing so might lead to a $45 fine.

Vehicle owners are encouraged to park their cars and trucks off streets, if they can, to help with district snow removal. If it blocks the district’s ability to remove snow, it might be fined as well. 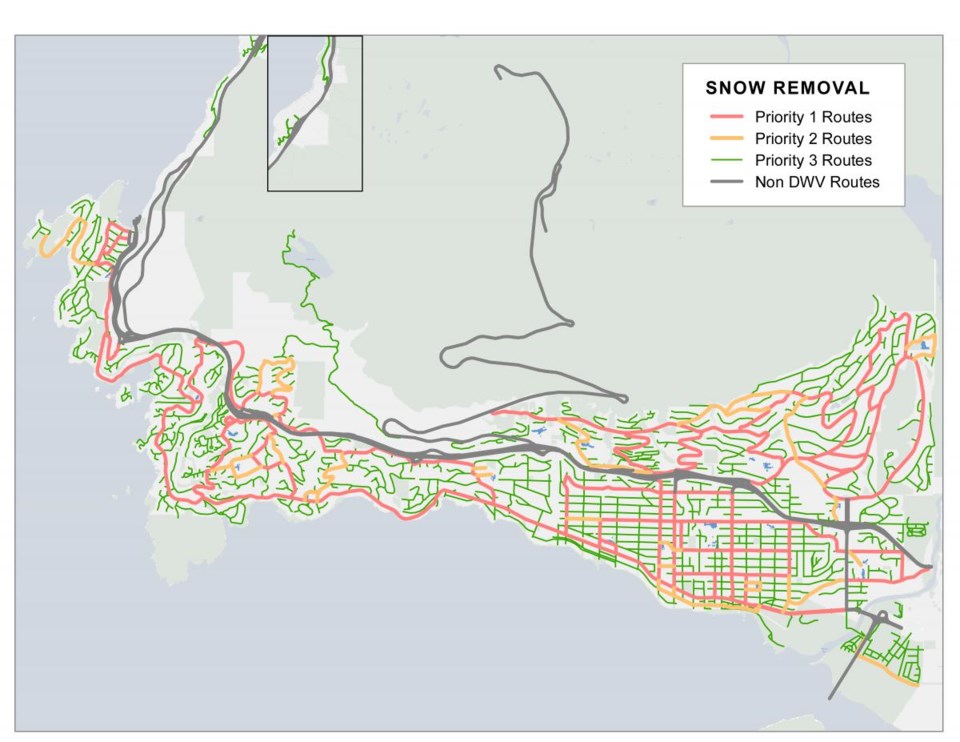 Snow clearing routes have been highlighted by the district, similarly to the others, in a three-phased approach.

Priority 2: School routes and minor collector roads (e.g. Bellevue Avenue) are the second to be cleared.

Priority 3: Local roads, cul-de-sacs, footpaths and footbridges will be dealt with after the weather disturbance has passed and/or Priority 1 and 2 routes are in a safe and stable condition.

However, the district does ask that residents be patient when waiting for Priority 3 routes to be cleared – depending on the amount of snowfall, it might be delayed.

Multi-use pathways and trails are cleared concurrently to roadways, in their own priority order beginning with sections of trails and multi-use paths near schools, so that those using modes of travel on these routes can get around too.

In 2020, the district also launched its Snow Angel volunteer program. The initiative looks to help those who might not be able to clear the snow themselves and has so far been a success.

“We have had heavy snow in West Vancouver recently, and volunteers are out in the community helping residents in need – particularly elderly residents and residents with illnesses, disabilities, or mobility challenges – clear snow from their sidewalks and walkways,” a district spokesperson told North Shore News.