'We are doing kilometres for the survivors and so people can learn about this'
Jul 12, 2021 5:27 PM By: Elisia Seeber, Local Journalism Initiative Reporter 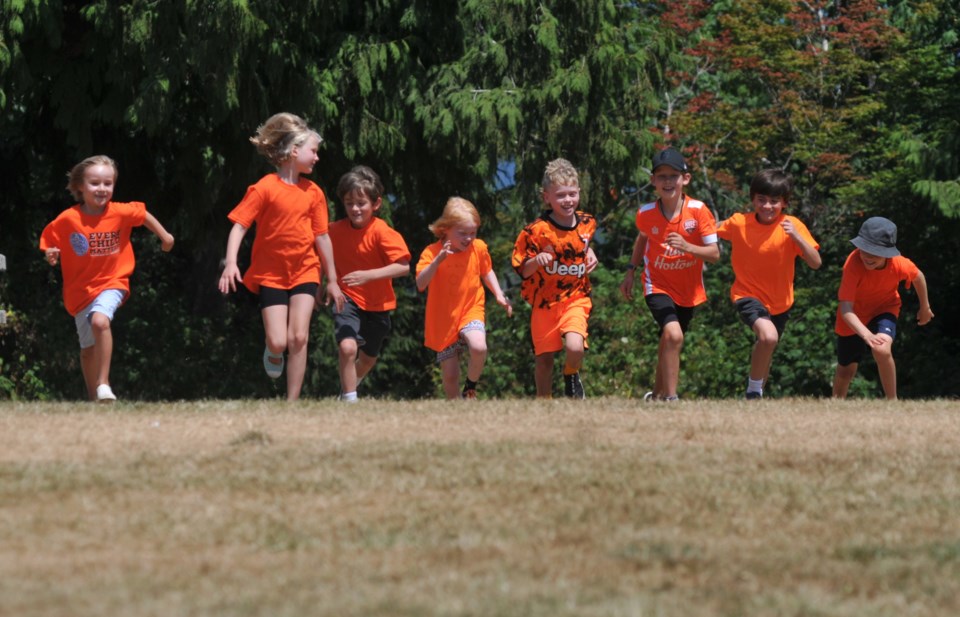 Ten North Vancouver kids will be putting in quite a few extra kilometres during the summer break to help raise money and awareness for residential school survivors.

The Sherwood Park Elementary students, aged between five and 11, will be out in their orange shirts with a challenge to complete 215 km each through various sports activities over the holidays.

Through their Gofundme campaign, Every Child Matters - Kms By Kids for Kids, their team goal is to raise $2,150, or $215 each, by either running, biking, swimming, scooting, skating, or paddling to reach their combined 2,150-kilometre goal.

Andriana Beauchemin, a school parent who has helped organize the campaign, said her son Varley and fellow students were deeply moved to do something to help after Tk'emlúps te Secwépemc First Nation shared the heartbreaking news that the remains of an estimated 215 Indigenous children were found in unmarked graves using a ground penetrating radar at the site of the former Kamloops Indian Residential School in late May.

Other communities have since revealed their own such findings. In late June, Cowessess First Nation in Saskatchewan said it had found 751 unmarked graves on the site of the Marieval Indian Residential School and ʔaq̓am, one of four bands in the Ktunaxa Nation near the city of Cranbrook, B.C., shared that 182 unmarked grave sites had been discovered near the former St. Eugene's Mission School.

“We know there are still more children yet to be recovered and brought home, but we are choosing 215 as a symbolic number because of the recent discovery of the remains of 215 children at the Kamloops Residential School,” Beauchemin said.

“Our school has a lot of First Nations students and it’s on Tsleil-Waututh Nation land, so [the students] are really connected to the First Nations community. It really hit home, just how sad that discovery was.”

All funds raised by the campaign will be going to the Indian Residential School Survivor Society, a provincial organization with a 20-year history of providing services to residential school survivors.

Between the late 1800s to the early 1990s, it’s estimated that more than 150,000 First Nations, Métis, and Inuit children were taken from their families and forced to attend one of 139 federally funded Christian schools as part of a program to assimilate Indigenous peoples into Canadian society. The children were stripped of their culture and native languages and forced to convert to Christianity. Many children were physically and verbally abused and suffered serious health issues and malnutrition due to neglect.

It wasn't until 1984 that all residential schools in B.C. were closed down; the last institution in Canada didn't close until 1996 in Saskatchewan.

The Truth and Reconciliation Commission says the exact number of children who died at residential schools "may never be known, but the death rates for many schools, particularly during times of epidemic or disease, were very high." Through its work with survivors and Aboriginal organizations on the Missing Children Project, the TRC has identified the names of more than 4,100 children who died of disease or accident while attending the institutions across Canada so far.

Beauchemin said while the campaign would help raise some money, it was more so about educating the kids about Canada’s former residential schools.

“The kids wanted to do something to help and we as parents just want to make sure that we're instilling awareness in them about these issues,” she said.

“The main point is raising awareness, because every time they start doing their kilometres and put on their orange shirts, it brings on a conversation about it, and it helps it not to be forgotten.”

The students were eager to get started and have already travelled 436 km and have raised $1,175 and counting.

“Kids were taken to those schools and some lived, but others didn't, and I just learned about this,” Beauchemin’s son, Varley, said.

“My grandmother's family [who are Cree] was in those schools. We are doing kilometres for the survivors and so people can learn about this.”

Fellow teammate Arlo Webbe said he was “sad that the kids were taken away from their families.”

“I want to do this challenge to show First Nations people that we want to help them, and I want to be better and nicer than the people who hurt their families,” he said.

Arlo’s brother Parker added that “it wasn't right that kids were taken away from their families.”

“It's mean and really bad that they did that,” he said. “I want to run and raise money to show that I am an ally."

The plan is for students to end the campaign or complete their goals by Sept. 30 on Orange Shirt Day, a day to honour and support residential schools survivors.

Beauchemin said other kids were welcome to join in on the campaign.