The NoteWorthy Singers meet once a week at Windsor Secondary
Nov 7, 2019 7:30 AM By: Ben Bengtson 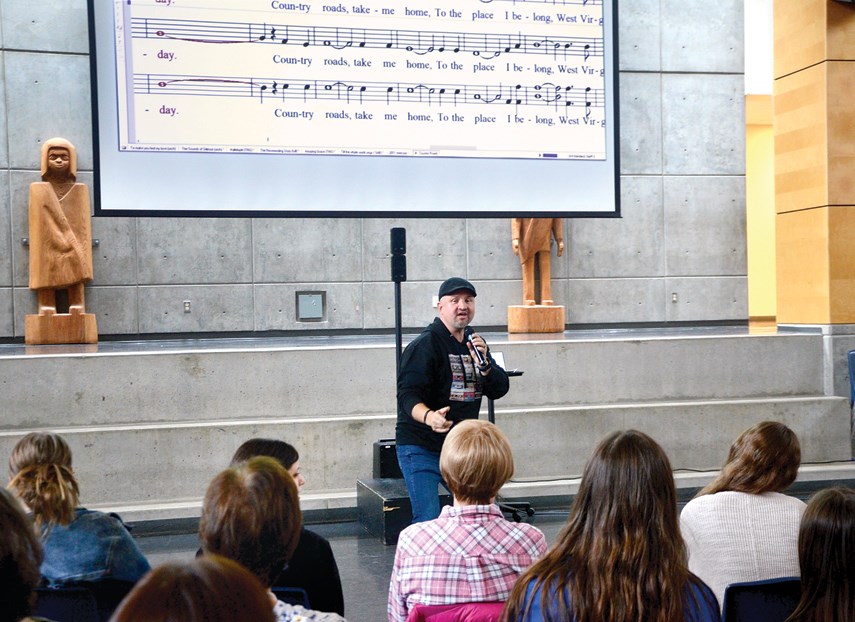 The singers are gathering.

It’s late in the afternoon on a recent Friday and a mix of people are hustling to find their seats at Windsor Secondary. Energy is high because it’s the early goings of a new choir with a unique twist.

Composed of roughly 10 students, 10 people living with memory loss, and 10 caregivers, the choir is calling itself the NoteWorthy Singers.

“One of my favourites that we’re doing right now is ‘Country Roads,’ which is so much fun to sing,” says Chloe Di Salle, a Grade 12 student at Windsor.

Di Salle loves to sing in general. She’s already a member of four separate high school choirs, but didn’t pause for a second when the opportunity arose to join the new intergenerational choir, directed by Windsor’s Adam Kozak.

“I was super interested, first of all, because my grandmother, before she passed away, she had severe Alzheimer’s,” says Di Salle. “One of the things that’s been stressed … is the importance of this not only for the people who are struggling with memory loss, but for their caretakers and their loved ones who are taking care of them now.”

Under the enthusiastic direction of Kozak, the approximately 30 people gathered for choir practice get to know one another.

They’re all mainly strangers here – there’s teenagers and older adults, seniors living with mild to moderate memory loss, and in some cases, family members who have become caregivers to their loved ones.

But everyone finds common ground through music. The sound of dozens of voices rises to the top of the auditorium as those gathered belt out John Denver’s classic tune: “Country roads, take me home/To the place I belong. …”

The purpose of the choir is multifaceted, according to Havens. She hopes the new choir will help bridge the gap between different generations, foster a more dementia-friendly community – something that on paper all North Shore municipal councils are in favour of – and, perhaps most crucially, the choir could provide welcome respite for people living with memory loss, and their caregivers, when it might start to feel like everything they once knew is slipping away.

“Quite often people with dementia are losing their community,” says Havens. “Social isolation increases depression, it increases medication use – there’s all sorts of negative things that happen when we isolate socially. … We want them to be out in the community.”

Bouvet and Haven’s program is inspired by Voices In Motion, an intergenerational choir based in Victoria, B.C. which is part of a research study led by University of Victoria nursing professor Debra Sheets.

Part of the project, according to Sheets, involves researching the specific “biopsychosocial” aspects of the choir on people’s quality of life and well-being, and in particular in addressing stigma and social isolation.

“Part of the goal of the choir is to have fun and sing and have a supportive, inclusive community,” says Sheets. “The singing taps into a different part of the brain. We call it a super-stimulus because some of the parts of the brain that aren’t affected by memory loss are still intact and we can trigger that, we can draw upon that.

Those interested in learning more about the NoteWorthy Singers, who have so far been meeting on Friday afternoons, are asked to contact Pam Havens at Parkgate, myparkgate.com/seniors/dementia-services.

While the choir has only had a few rehearsals, the project has been a resounding success so far, says Havens.

“We have a vision of it carrying on weekly, perhaps having concerts,” says Havens.

“The endorphins that are released through the power of music carries over.”