Nerd’s the word at science gathering 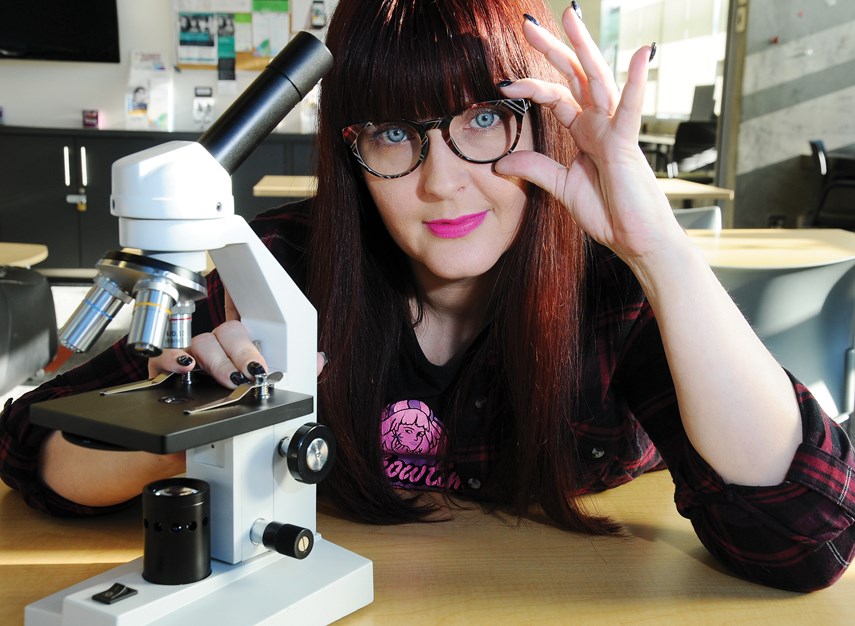 We remember the past, not the future.

What is the nature of time? To what extent is it relative or imaginary? What time was it when the big bang exploded us all into existence; and could it have been rescheduled until after lunch?

Stephen Hawking explored most of those topics in his book, A Brief History of Time. And since poring over those pages, North Vancouver resident Crystal Baldwin has been obsessed with finding something like an answer.

In a North Vancouver coffee shop, Baldwin discusses her role as the host and founder of Nerd Nite North Vancouver. The bimonthly gatherings of the geeky, gifted and ingenious were prompted in part, she says, by her fascination with A Brief History of Time.

“The first time I read it all I understood was the path of light and that was it,” she says, gesturing with a fingernail bejeweled with the elements of the periodic table. “But when I read it again in 2016 I got a lot more of it. By this time I’d been married to two engineers so my thinking was different.”

But like all good nerds, she wanted to know more. And she wanted to hear it from the physicists, astronomers or perhaps cosmologists.

“I don’t want Google to explain the arrow of time to me,” she says.

Baldwin has a radar for nerds, both the kind that can differentiate R2-D2 from a Dalek and the type fascinated with the cause and effect at play in the cosmos.

“I can spot an engineer at about 50 feet,” she says. “Nerds love to hike, so (they’re) usually tall and thin and no one’s been looking out for their outfit.”

She was at a party when she found a fellow traveller who told her about Nerd Nite Vancouver.

“I shed a little tear for science when I saw it was real,” Baldwin recalls.

It was like a Ted Talk but with more drinking, bigger laughs, and a tight time limit.

In 15 minute speeches, esteemed nerds told the crowd about the statistics of Halloween candy, the physics of a Dr. Who scene involving a black hole, and the connection between cats and artificial intelligence.

“That was it, I was hooked,” she says. “It still gives me science goosies.”

After about six months, Baldwin applied to bring Nerd Nite to North Van, partially in the hopes of an easier commute.

“Traffic between here and Main and 8th at the Fox Cabaret, is brutal,” she says.

After getting in touch with “the big boss of Nerd Nite,” and explaining what she sees as a “renaissance of science,” Baldwin was granted permission and went about looking for speakers, which turned out to be much easier than expected.

“Nerds, they want to tell you their stuff. And sometimes it’s not even what their degrees are in, it’s like some other random subject,” Baldwin says. “I told all my friends and volunteers: ‘Just think up all the questions you’ve ever dreamed that you want answered and that’s how we’re going to pick our speakers.’”

In preparing for the third Nerd Nite show at the Eagles Club on West Third Street, Baldwin brims with excitement over Friday’s lineup.

The evening is slated to open with a discussion of Superconducting Quantum Interference Devices, or SQUIDs, led by Colin Enderud.

To suggest SQUIDs are sensitive is a bit like saying Mozart knew how to play piano or that the Gobi is sandy. The devices can detect magnetic fields 100 billion times smaller than the Earth’s magnetic field, he explains.

“They’re one of the most accurate sensors that humanity’s ever made.”

Invented in the Ford Motor Company’s research labs in the 1960s, SQUIDs can be used to build quantum computers, conduct brainscans and sense the mineral and oil deposits below the Earth’s surface.

While his talk will be “vastly simplified,” Enderud plans to explain the elements of SQUIDs, particularly focusing on how they interact with the brain. The magnetic field of the neurons create a current in the SQUID, which in turn creates its own magnetic field, Enderud explains.

“By the end of it, you’re going to understand everything he told you,” Baldwin says.

“I don’t have any formal education so I’m just sort of winging it.”

The evening is also set to include YouTuber and Professor Astro Cat author Dominic Walliman as well as poet Angelica Poversky, who has the ability to discuss: “physics and sex and love and God, all at one time,” Baldwin says.

“There’s a lot of hunger out there,” Enderud agrees. “People are interested in science and it’s a pretty neat way to get some exposure to things you might otherwise not get exposure to.”

It’s also a good opportunity for academics accustomed to “dry, PhD talks” to “nerd out” amid drinking games and good cheer, Baldwin says.

“It’s not for profit. It’s for science,” Baldwin says.

Tickets are $10 but she frequently hands them out for free.

“If I was ever going to pimp out being a nerd, now’s the perfect time,” she says, discussing her fascinations with the Blockchain, Hedy Lamarr (Baldwin adds that, like Lamarr, she’s “much happier between husbands.”) and the TRIUMF particle accelerator at UBC.

“The fact that you can show up and . . . for a night somebody’s going to talk nerdy to you, I think that’s great,” she says.

There’s something special in bringing all those minds together, Baldwin says. She sent free tickets to a North Vancouver businessman, she says.

“Dude, you found your herd,” Baldwin told him.