Kids learn history from those who lived it 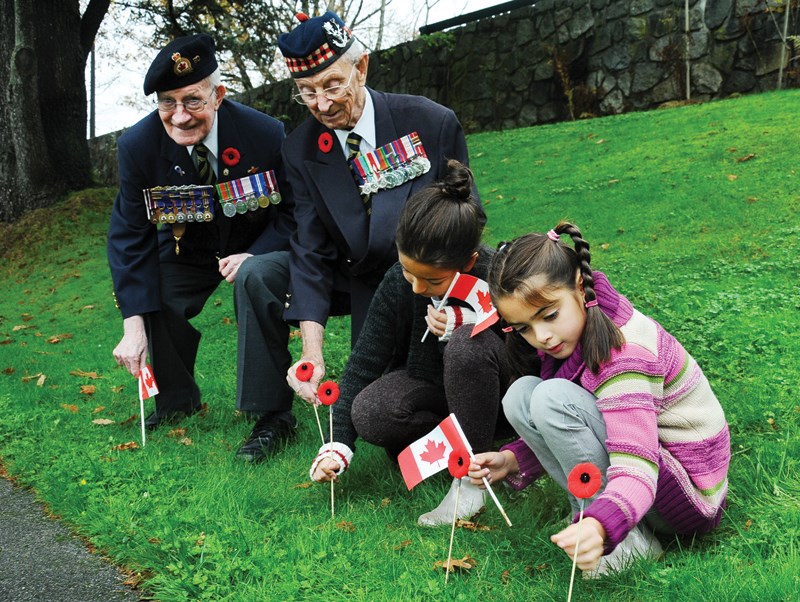 One of the highest ranking officers in Canadian history, Fairweather, a West Vancouver resident, is an honourary colonel of the Seaforth Highlanders of Canada and the oldest living member of the regiment.

On May 6, 1945, Fairweather and his fellow Seaforths were in attack formation on the banks of the Ijssel River in Holland when the order came to stand down.

Five Fairweather brothers had enlisted, but only four came home.

“The order brought an enormous sense of relief to all of us,” Fairweather said in an interview with the News last November.

These days Fairweather can be found on the greens of the venerable West Vancouver Lawn Bowling Club, which opened in between the two world wars.

Playing alongside the veteran are fellow lawn bowling enthusiasts, some as young as eight years old.

While the sport is a great way for young and old to be active, it’s also one of the last remaining opportunities for the younger generation to hear wartime tales from those who saw battle and survived it.

Mason himself has been regaled by war stories from club members – the narration coming out naturally.

“I was just standing there and he started to talk a bit about the war. And just out of the blue, he told me a story about his friend and a plane crash and all this stuff,” says Mason, of one veteran nonchalantly sharing his story. “Those are things you can’t read in a book.”

The lawn bowling club is situated steps from the cenotaph inside West Vancouver Memorial Park at 19th Street and Marine Drive.

The day before veterans, dignitaries and the general community gather on Nov. 11 to show their respect for the men and women who served, the lawn bowling club will hold a special ceremony of its own.

The Nov. 10 event will see veterans hand Canadian flags to West Vancouver students who will in turn place them in the ground, creating a patriotic walkway and sea of red and white down from the club to Memorial Park.

“The opportunity for the students to learn about the sacrifices our veterans made and the connection to the freedoms that our students enjoy today is one of the many reasons events like this are critical,” said Hollyburn elementary principal Kim Grimwood.

Hollyburn student Alexandra Scoles, who was on hand at the club for a rehearsal this week, said she appreciates the sacrifices veterans made.

“They didn’t have to but they did it anyways,” said Scoles. “It’s nice to see them in their uniform and get a chance to meet them.”

Fairweather will be participating in the ceremony and is moved by the gesture.

“It’s wonderful to see the kids out and to appreciate what the veterans have done,” said Fairweather.

Students will have a chance to sit down with the veterans and ask questions.

Veteran and WVLBC member Jim Irvine sees value in the event, as the soldiers and the students bridge the generational gap.

“It’s most important to make a connection with the kids, so they know what Remembrance Day is all about,” said Irvine.