Ice cream has a way of warming the soul after heartbreak. It’s been six months since a devastating fire tore through a subsidized rental complex in Deep Cove, displacing 66 residents including seniors and others who have disabilities.
Feb 1, 2019 10:20 AM By: Maria Spitale-Leisk 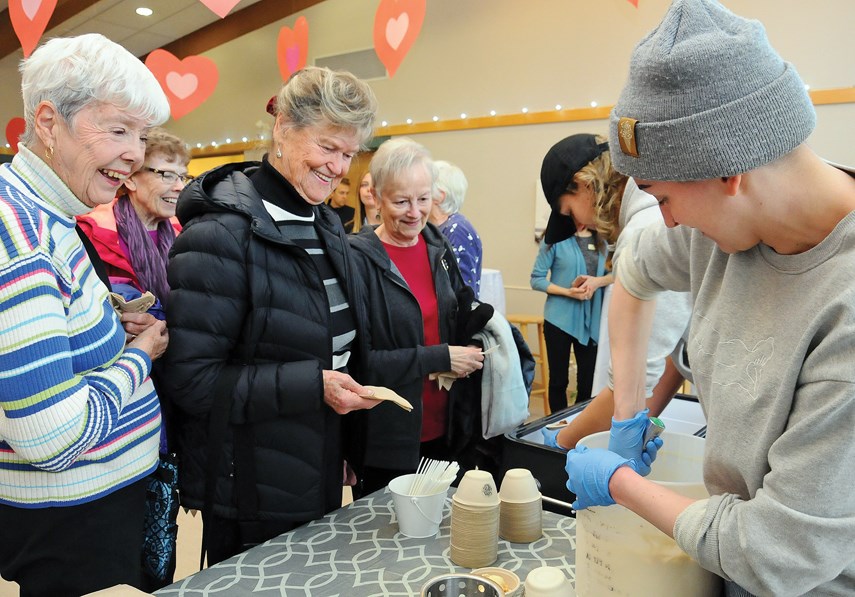 Ice cream has a way of warming the soul after heartbreak.

It’s been six months since a devastating fire tore through a subsidized rental complex in Deep Cove, displacing 66 residents including seniors and others who have disabilities.

Now felt like the right time to reunite the Lions Manor residents, under happier terms, says Erin Smith, manager of seniors’ services at Parkgate Community Centre, which hosted an ice-cream social for the evacuees on Monday.

The last time many of these former neighbours saw each other, on July 24, the scene was pure chaos.

Thick black smoke quickly engulfed the building as residents struggled to evacuate. For one senior with a broken foot, time was running out: the only way to freedom from four storeys up was to painfully climb over a balcony and down each rung of the endless ladder.

Good Samaritans scaled the building, their lungs filling with toxic smoke, to reach the trapped residents.

Fire engines screamed onto Gallant. Shell-shocked seniors stared blankly in disbelief, before being shuttled to an emergency reception centre at Parkgate Community Centre.

Gathered again in the same place this week, smiles could be found at the ice-cream social.

Irene Beatch and Bill Tower, one of the only couples living at Lions Manor, have since landed on their feet in an affordable apartment in the Maplewood area.

“It’s home for now until we get back to the Cove,” says Beatch.

The couple lost about 90 per cent of their possessions in the fire. Still, Irene and Bill know they are the lucky ones, as many of their former neighbours remain without stable housing.

Of the 46 applications, seven Lions Manor evacuees have been re-housed in subsidized units in Vancouver, Burnaby, Langley and West Vancouver.

Smith has learned some of the Deep Cove evacuees have relocated to the B.C. Interior to find affordable housing.

Denise Hoyle is one of the displaced bouncing around between family members’ homes in North Vancouver. Every couple of weeks Hoyle, labouring under complications from knee replacement surgery, switches from one sister’s home to the other.

Hoyle said she feels awkward for being an imposition, and wants to be independent again.

If there’s one thing the last six months have taught her it’s: “That we need more affordable housing.”

Ethel Patterson, 92, had made a home at Lions Manor for almost a quarter century. Her husband was born and raised in Deep Cove and the family has a long history here.

Since the fire, Patterson has been staying at her daughter’s house because she doesn’t qualify for public-funded assisted living.

Pam Kennedy is one of the lucky evacuees. She found a place with affordable rent in the Lower Lonsdale area, and in a relatively short manner.

“Because I know how B.C. Housing works, I immediately, the day of the fire, reactivated my B.C. Housing Account and got online and filled in all the places that I was (hoping) for,” says Kennedy.

The key to Kennedy finding a new place was being persistent. She sent applications directly to the building managers. For close to a month, Kennedy spent hours a day on the phone in her pursuit for affordable housing.

While her new place is much smaller than her Lions Manor apartment, Kennedy says she’s lucky to have a roof over her head.

In this new arrangement, Kennedy pays 25 per cent of her income for rent, instead of the 30 per cent at Lions Manor.

Irene and Bill’s young granddaughter, Savanah, is also feeling the loss after the Lions Manor fire.

Savanah used to clean balconies and carry groceries for residents in the building. The Grade 7 student always looked forward to tea time with her grandma at the manor.

“My grandma would tell me some of the ladies at tea time feel really happy when I come there because some of them don’t have any family,” says Savanah, who attended the ice-cream social.

Earnest Ice Cream contributed the sweet treats for the reunion, while nearby Cedar Springs PARC retirement residence donated baked goods and a gift basket to the event.

North Vancouver-Seymour MLA Jane Thornthwaite was on hand to say thanks to Parkgate staff and volunteers for coming to the aid of Lions Manor residents, and acknowledged the first responders for going above and beyond during the devastating fire.

Approximately $60,000 was raised for the fire victims through an online campaign started by Parkgate. Each evacuee received about $1,000 each to help get them back on their feet.

“It just makes me so proud to be a part of this community,” says Smith.