“If I never get to experience your true response in any given situation will I ever get to know who you really are?” Russell Porter stands in front of a group of 16 teens. He is holding up a cellphone. “Who here has a phone?” he asks.
Rosalind Duane Mar 13, 2016 12:00 AM
Previous Next
1 / 1
Expand
Previous Next

“If I never get to experience your true response in any given situation will I ever get to know who you really are?”

Russell Porter stands in front of a group of 16 teens. He is holding up a cellphone.

“Who here has a phone?” he asks. Not surprisingly they all raise their hands.

What follows is a discussion about true communication, the resonance of the intention of feeling, and what it means to live without a protection system like a phone. When texting you can strategize your response and control the narrative more than when you are talking to someone in person, he notes. As he kneels on the ground in front of the group, Porter poses a question: what is missing from texts?

“Your beautiful, flawed, interesting, unique handwriting,” he suggests quietly, tying it in to the expression of honesty, individuality and personality.

There is no sound from the audience as Porter adds more layers. He talks about getting down to the deepest, most powerful place of creative decision-making. He talks about the teens battling their brains to reach back to an instinctive empathy they were born with but may have forgotten.

“Is this hard?” he asks the group at the end.

“Yes,” they answer almost in unison.

“And that’s a good thing,” Porter tells them.

It’s a regular rainy Thursday night outside in North Vancouver, but inside The First Step Actors’ Workshop there’s something interesting unfolding. It’s an acting class to be specific, but it also seems like something else. Something not so specific.

After Porter finishes his instruction, the class breaks into two groups and heads to separate rooms to participate in an improv exercise.

Two students sit facing each other. A phone rests on a table between them. They start to have a conversation, but are interrupted by a call. One student answers the fake phone and has a conversation with the person on the other end. It is that student’s job to then somehow include the other student in the conversation without explicitly telling them what’s going on.

Throughout the exercise, the students are reminded to consider who each person is in the conversation and what their relationship is to each other.

As the next half an hour unfolds, the two groups tackle serious subjects in their phone conversations, including cancer, crime, and abusive boyfriends, all unscripted. The students, whether they are part of the scene or not, seem highly engaged.

Each scene is just a moment in life and they are all present for it, one of the instructors tells the class.

The scenario may be pretend, but what they’re doing in the scene is not, explains 17-year-old Jasmine Gish in an interview after the class.

“It’s not putting on a show it’s being able to actually have some truth with someone,” she says.

At school everyone figuratively wears a mask or carries a security blanket, but in this class they don’t.

“People who come here really do want to feel something and want to explore,” says Gish. “It teaches you about yourself and it helps you grow.”

It’s not surprising to Porter that the teens brought up somewhat dark subjects during their improv exercise. Although the instructors give them the broad narrative, the students migrate to where they will most be able to feel, he says.

“They choose to be in a moment that elicits the most feeling,” he explains. “Isn’t that interesting? Because where are they getting that out there in the world?”

One of Porter’s life theories is that everything we do, every day all day long, is about feeling. Feeling, empathy, and connection are themes that come up repeatedly in our discussion about the teen acting class, which seemed more like an exercise in human study than an exercise in scene study. 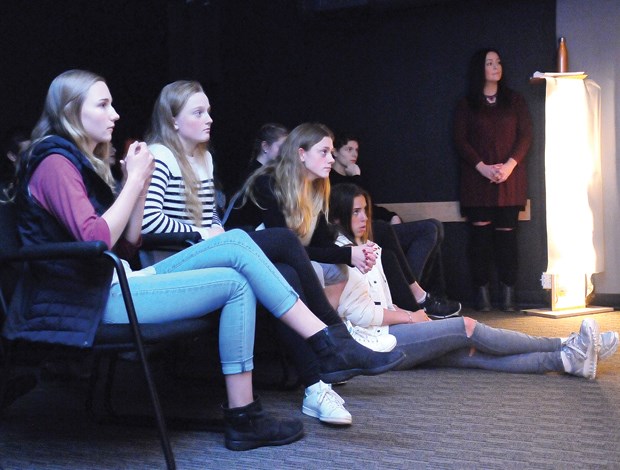 Craig Shand has been attending one of the adult classes at the studio for about four years. He was hooked after the first class and enjoys the emotional element of acting.

“It’s exciting to be on the edge of different feelings,” he says. “It’s really just portraying life, which is what people struggle to do.”

Shand has been in some commercials and had a small part in a Bollywood film, but says although he would enjoy pursuing acting as a career, he’s not relying on that to happen and enjoys the weekly classes as an opportunity to open up to different sides of his personality.

Although students also do scripted scene study, Shand enjoys the improv exercises because they hone instinct and encourage being in the moment.

“Just live and be human and don’t be afraid to go with how you feel,” he says.

Reflecting on the social-emotional exploration he witnesses and guides each week at the studio, Porter suggests he has had a revelation of sorts.

Although he didn’t set out to, after 17 years of running his business, he now wonders if he has found something he didn’t know he was missing.

“Maybe after all this time maybe I’ve learned something: that none of it’s about acting. Maybe it was a journey, maybe it was a search. I’m finding something through them.”

A graduate of Balmoral and Carson Graham schools, Porter found a safe place in their drama programs as a teen. What got him into acting was a need to be seen and heard, he notes, and fortunately he got what he needed then. After high school, Porter went on to act professionally and has appeared in popular movies and TV shows, including The X-Files, Head Over Heels, Supernatural, and Arrow.

However, he now admits that in the early days of his career he didn’t know what he was doing.

“I had no idea what acting was then,” he says, adding he knew what the TV and film industry was about, what getting an agent was, what going to an audition was, but didn’t truly understand the craft. “Then I realized, wow, the person you are really is the catalyst. It’s all personal.”

Acting, as in life, he now believes, is about being connected and being in the moment without fear and without strategy. And he’s hoping to pass that message on.

“I would say it’s about feeling, it’s about defining character, meeting our own character, and rediscovering our instinctive empathy,” he says, adding there’s something that might be lacking in his students’ everyday experiences that they get through acting.

“It’s a place where everybody walks through the door and they’re recognized for who they are, not who they’re supposed to be.”

Porter says he is constantly amazed and inspired by the work he watches in class every week.

And probably without meaning to, he makes a statement about the students that could just as much be about life in general as it is about his acting workshops: “We’re all so different, we’re all so unique and yet we are all so essential to this experience.”