From Oregon to British Columbia, avian rehabilitation centres say baby birds plummeted from nests to escape the heat wave. 'They all kind of fell like rocks,' says the head of one rehab centre

Starving, dehydrated, shattered from 60-foot falls — that’s how bird rehabilitation centres from Oregon to British Columbia are describing the hundreds of raptors that poured into their care after the late June “heat dome” scorched their nests.

Rob Hope, general manager at the Orphaned Wildlife Rehabilitation Centre (OWL) in Delta, says he took in nearly 130 birds during that week from all over the province. That’s five times the normal volume.

“They’d all be clumped together on the ground,” he says. “Dead siblings amongst them.”

“The bodies of water warmed up so rapidly, the fish went down,” she says. “The eagles were starving and osprey were unable to feed their young in the nest. The babies were basically baking in the sun.”

Osprey nests in the area have been set up on the top of artificial polls, so they don’t get caught up in the power lines. In one case, gas company FortisBC was called in with a cherry picker to rescue a pair of chicks stranded under the sun in Penticton.

Elizabeth Melnick, who runs a wildlife centre in Abbotsford, describes a “nightmare” scenario, with phone calls skyrocketed as the mercury climbed.

Many never showed after reporting calls, and Melnick spent a good part of the day coaching people how to keep birds alive.

“There were different strategies; ’See if you can shade the birdhouse,’” she remembers saying. “I even suggested getting a flexible ice pack over the roof of the bird house just to cool them down.”

When temperatures hit 41 C, birds can no longer regulate their heat, so they are forced to cool down with water, shade, anything that will lower their temperature.

Melissa Hafting, who runs BC Rare Bird Alert, says she runs a nest box program with the City of Richmond. In three parks, she has found many dead fledglings since the heat wave.

“It’s soul-destroying for species like Tree Swallows that are already in decline,” she says. 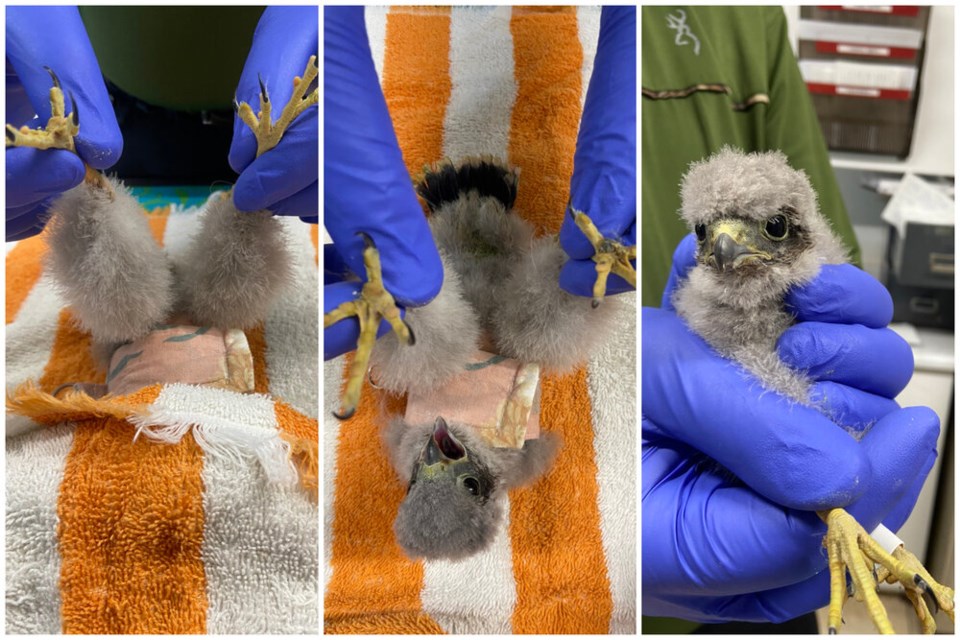 It was the raptors that suffered the most during the heat wave, wildlife centres tell Glacier Media.

The end of June is the time when fledgling hawks are still in the nest, but have yet to learn to fly.

“They were just jumping out of their nest because it was too hot,” says Lynn Thompkins, director of the Blue Mountain Wildlife rehab centre in eastern Oregon. “They all kind of fell like rocks… They just couldn’t tolerate it.”

As the only rehabilitation centre on the eastern side of Washington and Oregon, Thompkins says they were flooded with nearly 120 broken raptors, many young chicks that fell from nests 60 feet up in the air. Thirteen of the hawks were badly injured and had to be euthanized.

In Portland, Oregon, another rehabilitation took in 100 Cooper's hawks. Those are the ones that were found.

“I have never seen anything quite like it in over 30 years of doing rehab,” says Thompkins. “The sort of scary thing is... this what we’re in for in the future with climate change.”

“It’s going to affect their survival.”

A month later, bird rehab centres in B.C., Oregon and Washington all say those who survived are doing well.

South of the border, Thompkins says her team nursed back to health dozens of Cooper’s hawks for the first time — using a technique called hacking, where rehab specialists mimic the role of the mother.

At the OWL Centre in Delta, Hope says they have released 15 birds back into the wild so far and are preparing another 32 to leave as well.

The other 80-plus birds remain in care.

One of the urban Bald Eaglets that left the nest too soon during the heatwave, was released back to the wild yesterday morning 🦅 many more to follow#OWLrehab#RescueRehabRelease #RaptorRehabilitation pic.twitter.com/tasx4Pbhlu

Nurturing the avian survivors of the June heat wave has been overshadowed by thoughts of what’s to come. Scientists have since found that the record temperatures were made 150 times more likely due to climate change, and that by 2040, such events could come every five to 10 years.

Hope says that as a top avian predator, raptors have long been an indicator species, a bellwether to the harmful effects of DDT or lead poisoning.

“When they have issues, that’s telling us something,” he says.

“It was definitely an eyeopener, right across the Pacific Northwest, We got hammered and hammered hard.”