A restaurant and a hair salon in West Vancouver are among the businesses that have been temporarily closed this month over concerns about the spread of COVID-19.

The Cactus Club Café at Park Royal Shopping Centre was closed April 4 and Wish Dry Bar, a hair salon on Bellevue Avenue, was closed April 5. Both closures are expected to be temporary and are among 10 businesses closed in the Vancouver Coastal Health region under new measures recently put in place to stop the spread of the virus in workplaces.

Under new powers granted to local health officers by Dr. Bonnie Henry, the province’s medical health officer, when transmission of coronavirus happens in a workplace, an order can be issued closing that business for at least 10 days.

According to information on workplace infections presented Thursday by Henry, the largest number of people in Vancouver Coastal Health who have contracted COVID through their workplaces have been in restaurants, bars and lounges, by a wide margin, followed by those who work in fitness studios and gyms.

According to the snapshot of workplace cases in February and March, there were almost 160 cases of COVID-19 linked to about 70 restaurants or bars in Vancouver Coastal Health during that time frame. There were about 40 cases linked to about 18 gyms and fitness studios. 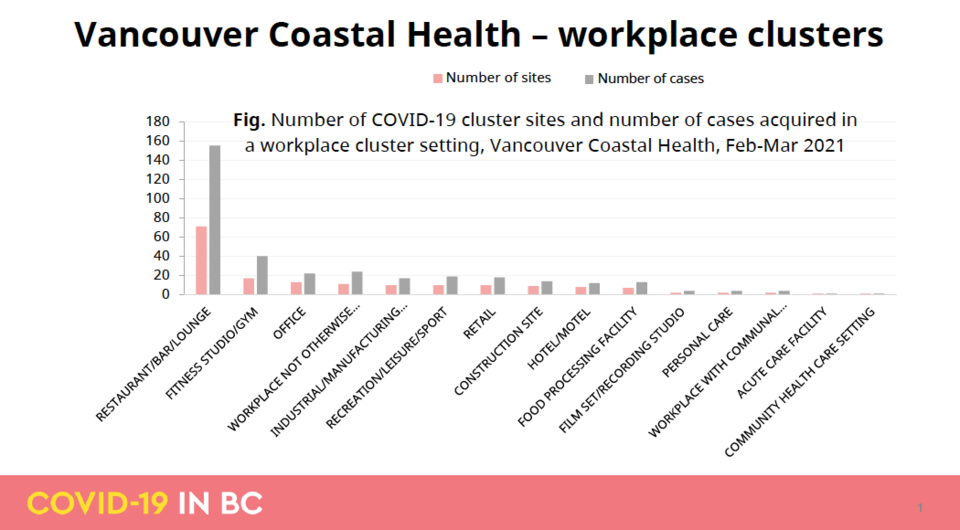 A chart showing the types of workplaces that have led to clusters of COVID cases in Vancouver Coastal Health. By BC CDC

Other workplaces where there have been clusters of COVID cases noted among employees in Vancouver Coastal Health include offices, recreation and sports facilities, unspecified workplaces, industrial workplaces, retail, construction sites, hotels and food processing sites.

In each of those categories, there were between 10 and 25 cases linked to between five and 20 sites. Far smaller numbers were linked to cases on film sets, personal care settings and hospitals.

Fraser Health has a different profile, according to information presented Thursday. Industrial and manufacturing sites were the number one source of workplace cases - which numbered 450 there between Feb. 1 and April 12 – while gyms and fitness studios resulted in about 350 cases. There were also about 270 cases linked to restaurants and bars in Fraser Health. Office buildings, trades, food processing, transportation, warehouses, retail shops and farms also made up a significant number of cases. Between 30 and 40 cases each were linked to first responders and health care workers there.

In some cases, it is difficult to separate workplace and social exposures to the virus, said Dr. Mark Lysyshyn, deputy chief medical health officer for Vancouver Coastal Health. Most workplaces have good COVID safety plans in place related to actual workplace tasks, he said, but it is often on breaks and before and after work that transmission can occur between employees.

“Break rooms are a big problem,” he said. “People carpool together.” Employees may take lunch breaks together or go out together after work, he said, adding that is more likely to be when transmission of the virus occurs.

There are exemptions to the closure orders. Henry said grocery stores, pharmacies and schools will not be closed under the new powers granted to health authorities. Several grocery stores on the North Shore, including the Real Canadian Superstore and the Park Royal City Market, have recently listed COVID cases among employees.

On Thursday the province began rolling out an expedited schedule of vaccinations for frontline workers including teachers, police and firefighters in hotspots around the Lower Mainland where COVID cases have been increasing. Restaurant staff and grocery store workers are not included in that program.