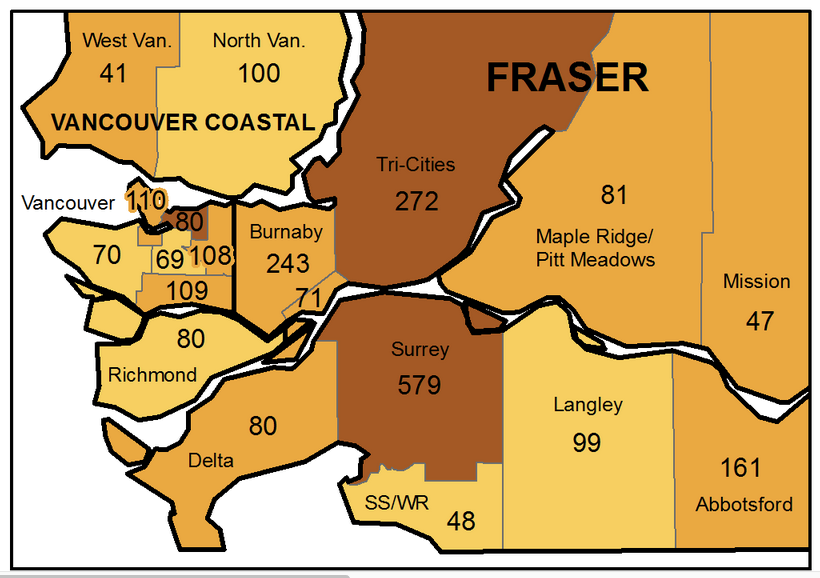 A geographical breakdown of new COVID-19 cases in the Lower Mainland for the week ended Feb. 20.BC CDC

The number of new COVID cases remained relatively stable on the North Shore in the past week, but those numbers were still substantially higher than they were a month ago.

There were 141 cases of coronavirus in the week ending Feb. 20, according to information released by the B.C. Centre for Disease Control.

That compares to the 151 new cases reported the previous week.

The breakdown of where those cases occurred is similar to previous weeks as well, with 100 new cases reported in North Vancouver and 41 cases in West Vancouver.

The North Shore is among several areas of the Lower Mainland where case counts have recently been rising, including Surrey, Burnaby, Abbotsford, the Tri-Cities and parts of Vancouver.

Dr. Bonnie Henry, the province’s medical health officer, has voiced concern about that and said the increasing cases in the Lower Mainland can be traced back to social gatherings.

Officials have pointed to social events ranging from children’s birthday parties to a recent trivia night in Port Moody as leading to the spread of COVID-19.

“We need to reduce the transmission events that are happening in our community. Once we start to see increases, they rise very quickly,” Henry said.

She warned on Thursday that both the number of new cases and the percentage of tests coming back positive have been creeping up recently - now sitting at close to seven per cent. "In the Lower Mainland in particularly is where we've seen most of this uptick," she said. "Every person on average who's infected is spreading it to more than one person. There's potential for rapid growth if we're not careful."

Rates of COVID infections in Whistler, which spiked in January and first part of February, are now falling in the community.

There have been over 700 cases of coronavirus in Whistler since Jan. 1.

On the North Shore, the elevated numbers come at the same time as a dramatic spike in recent notifications for school exposures to the virus.

Over 50 exposure warnings have been sent to classes throughout North and West Vancouver this month.

It also comes at a time when the number of new cases in children and teens aged 10 to 19 has been rising.

Elsewhere in the province, the number of COVID hot spots appears to be falling. Several North Coast communities near Prince Rupert and Terrance continue to have higher infection levels, but cases have dropped in the Interior and other parts of the North.

B.C. had recorded a total of 78,278 cases of coronavirus as of Wednesday, including 4,668 active cases. In the Vancouver Coastal Health region, there were 1,138 active cases.

The province is expected to announce details of plans to begin vaccinating seniors over 80 in the community on Monday.