North Vancouver is most vaccinated community in Lower Mainland

The number of new COVID cases is continuing to inch down on the North Shore as vaccination rates edge upwards.

The number of new cases has been low and stable for the past three weeks. There were 10 cases reported in the week ending July 3, compared to 11 cases last week and 12 the week previous.

The District of North Vancouver continues to have one of the top overall vaccination rates in the province, with between 86 and 87 per cent of those 12 and over having received one dose. It is also the community with the highest vaccination rate in the Lower Mainland.

Similar patterns in steadily declining case counts amid rising vaccination rates have been seen throughout the Lower Mainland, with the number of new infections continuing to drop in areas like Surrey, Burnaby, Richmond, Vancouver and the Tri-Cities. Most communities in the Lower Mainland reported fewer than 20 cases in the past week.

Data shows about 92 per cent of cases provincewide are variants. In Vancouver Coastal Health, that number is slightly lower, at 80 per cent.

Since the pandemic began in January 2020, there have been 5,027 recorded cases of COVID on the North Shore to the end of June, including 3,696 in North Vancouver and 1,331 in West Vancouver. 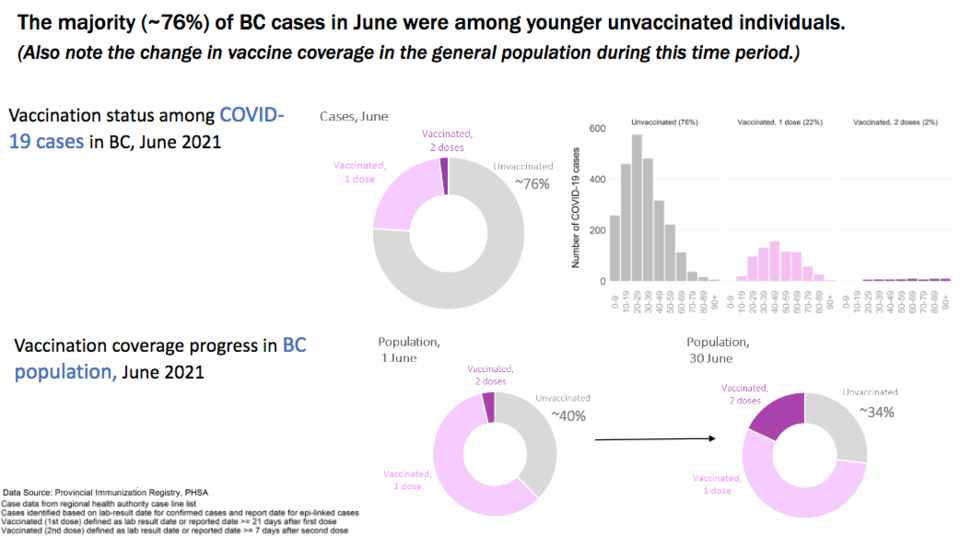 Information showing the proportion of COVID cases among vaccinated and unvaccinated people in June. By BC CDC