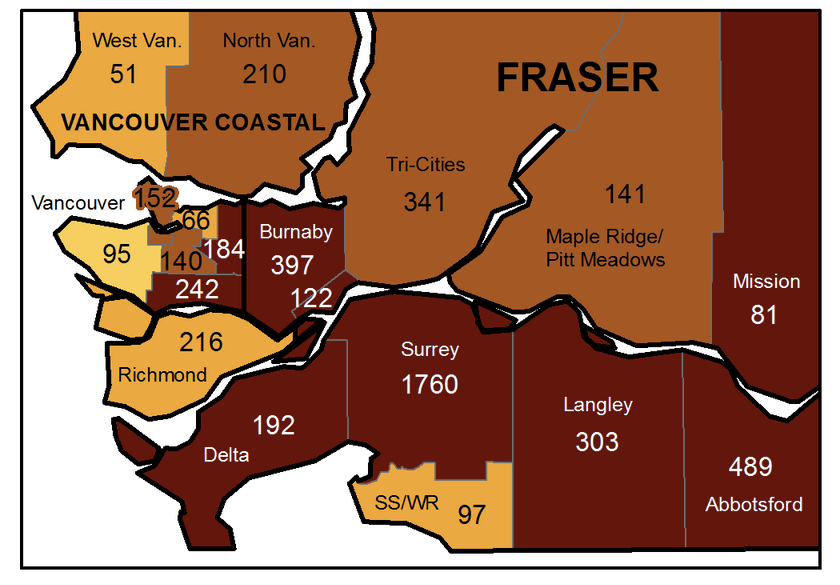 A map showing the geographical breakdown of COVID-19 cases in the Lower Mainland for the week ending April 24.BC CDC

COVID case counts on the North Shore are finally heading in the right direction.

For the first time in a month, the number of new COVID cases in the past week is down below 300 and the rate of daily infection has also dropped.

Of the cases reported in the past week, 210 are in North Vancouver and 51 are in West Vancouver, according to B.C.’s Centre for Disease Control.

Further good news is that the number of cases appears to have dropped in several other areas of the Lower Mainland this week. Case counts are down in several parts of Vancouver, as well as Richmond, the Tri-Cities and Maple Ridge. Cases of the virus are still high in many areas of Fraser Health, however, especially in Surrey.

Cases in Whistler and the surrounding Howe Sound communities, including Squamish, have also continued to drop this week, with 50 cases reported this week compared to 131 cases last week and 337 cases the week before.

Some elective surgeries at Lions Gate Hospital and other hospitals throughout the Lower Mainland have been cancelled for two weeks to free up staff to care for the most seriously ill COVID patients.

The news also comes amid reports of younger people being hospitalized and even dying from COVID.

People in their 50s are making up an increasing number of those admitted to hospital in the Lower Mainland, according to health officials. Since the beginning of the pandemic, there have been 2,434 people in B.C. under 60 hospitalized with COVID, including 545 admitted to ICU.

Deaths are still more likely in older age groups, although there have been deaths in all age groups except teenagers.

In the Vancouver Coastal Health region, there are currently 1,806 active cases, including 155 people in hospital and 54 in critical care.