A recent coronavirus outbreak at the Capilano Care Centre and a cluster of cases linked to tennis facilities at the Hollyburn Country Club recently pushed West Vancouver’s incidence of COVID-19 into one of the higher rates per population in the Lower Mainland outside of the Fraser health area.

Statistics released this week showed West Vancouver with 60 new cases in one week between Nov. 29 and Dec. 5 – putting it at an average daily rate of between 15 and 20 cases per 100,000 people.

That’s still lower than places like Surrey, Delta and Abbotsford which continue to be at the centre of the recent surge in coronavirus cases. But it’s a higher rate of new cases per population than other areas including Vancouver, Burnaby and even neighbouring North Vancouver.

North Vancouver’s 78 cases during that week gave it an average daily rate of between 5 and 10 cases per 100,000 people.

More recently, the average daily rate of coronavirus cases in the North Shore Coast Garibaldi health area as a whole was lower than that, with an average daily incidence of fewer than 5 cases per 100,000.

During the week of Dec. 4 to 10, there were 69 new cases in the North Shore Coast Garibaldi health area, which has logged 1,831 cases in total since the pandemic started. 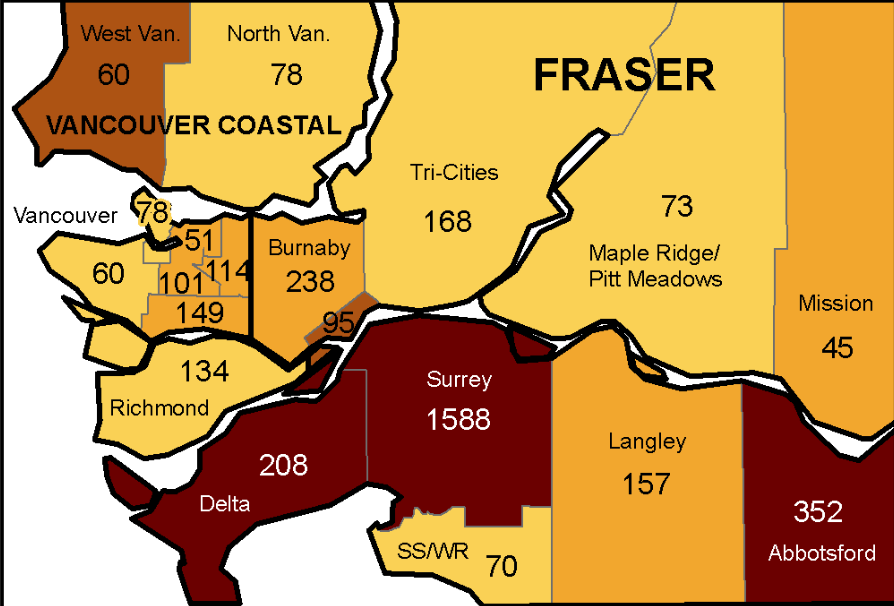 In other areas of the health region, there were 400 cases in the Sea-to-Sky corridor to the end of November, which included an outbreak among young workers in Whistler. The Sunshine Coast had 51 cases total and Powell River had 43 between January and the end of November.

Recently a change in policy has meant more detailed information about COVID-19 cases in local communities is being released by B.C.’s Centre for Disease Control on a weekly basis.

According to the centre’s weekly report on the coronavirus situation in B.C., between Nov. 29 and Dec. 5, the number of daily cases began to plateau in the Lower Mainland.

But Dr. Bonnie Henry, B.C.’s provincial health officer, appealed to British Columbians not to let down their guard, saying the province is still in the centre of the coronavirus storm and it will be some time before enough of the most vulnerable can be vaccinated.

B.C.’s vaccination program is expected to begin next week, with long-term care workers and health care workers who work in COVID-19 wards and emergency rooms at the front of the line for a limited supply of the Pfizer vaccine.

On Thursday, B.C. recorded its deadliest day of the pandemic so far with 28 deaths. All but two of those people were elderly residents of long-term care homes.