Total number of new infections has dropped over past three days
Jan 18, 2021 3:48 PM By: Chuck Chiang 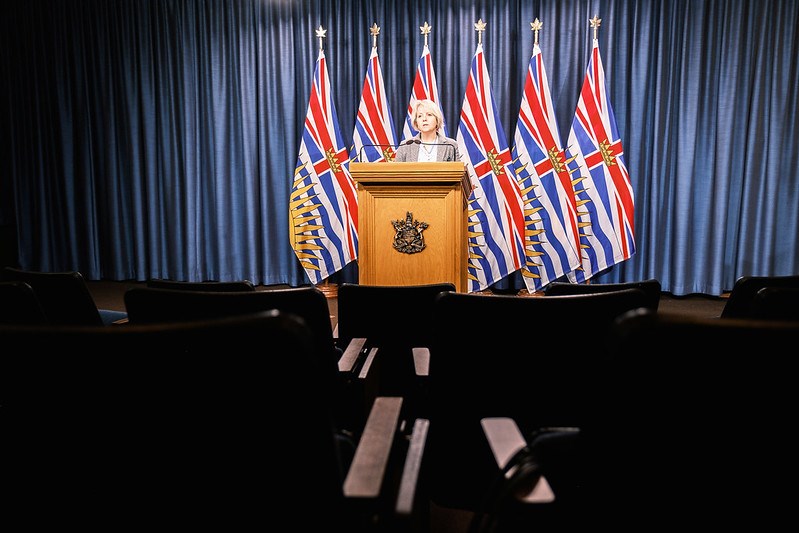 The number of new COVID-19 cases in B.C. continued its downward trend in the last three days, with daily counts dropping to 301 in the last 24 hours.

In the last three days, the province has seen 1,330 new cases of COVID-19, but the daily numbers have trended down from 584 (Friday) and 445 (Saturday) to 301 on Sunday. Active cases in the province have also dropped by almost 300 to 4,326 as of Monday, said B.C. Public Health Officer Bonnie Henry.

Currently, 343 people in the province have been hospitalized by the disease, with 68 in intensive care units. About 6,865 people are under active monitoring (not including those in the Northern Health region), and 31 new deaths have been reported – resulting in a total death toll of 1,078 in B.C.

The number of new cases continues to be highest in the Fraser Health region (548 in the last three days), but Interior Health has seen its number (257) almost catch up to the figure recorded in Vancouver Coastal Health (281). The Northern Health region (166), Island Health (65) and out-of-province residents (13) round out the new-cases numbers.

In the meantime, Henry also addressed the emergence of different variants of COVID-19 in places like Great Britain and South Africa. While there continues to be concern among the public about these variants increased ability to spread, Henry said it does not increase the risk to B.C. residents if people follow the current health orders of not holding social gatherings and wearing masks in public indoor spaces.

“The biggest risk, the biggest variant, is us,” Henry said, noting the importance of controlling individual behaviour. “We have the tools, and it is in our control.”

There has currently only been one confirmed infection of the new South African variant of COVID-19 in B.C. (a patient who was tested on Dec. 23 and is no longer infectious), and officials have still not confirmed how the patient contracted the virus – since no travel was involved.

Henry also updated the number of vaccinations that has taken place in B.C., which currently sits at 87,346. Henry added that the focus has been getting workers and residents in long-term care homes vaccinated, since that is where the bulk of COVID-related deaths have occurred.

She noted that about 80% of long-term care residents in Vancouver Coastal Health and Fraser Health are now vaccinated – and the plan is to have all residents inoculated by next week (depending on the vaccine arrival rate). However, the delay announced by Pfizer last week of the arrival of new vaccines in the next weeks means that the province will now need to focus first on getting people who have received their first vaccine shots to get their second (for full immunity to be activated).

The expansion of new vaccinations will continue after that, as new doses arrive, Henry said.

Both Henry and B.C. Health Minister Adrian Dix also addressed reports of officials from municipal governments travelling abroad during their winter vacations – a topic that has ignited heated debate in places like Alberta and Ontario as elected politicians have stepped down from posts for violating recommendations against travel.

Henry noted that in B.C., there is no health order against travel. There is, however, a strong recommendation against it, especially if it involves international destinations. What the health order does cover is the requirement to quarantine after someone returns from abroad, she added.

Dix, however, was more direct in his criticism of elected officials who may have travelled during the winter holidays.

“What I can say is pretty simple,” he said. “’No to non-essential travel right now.’

“I think what’s essential and non-essential is pretty clear. You don’t have to look far to see places where COVID has gone from a stable situation to a highly volatile one.”

Meanwhile, Henry has already turned her attention to the upcoming February holidays and events, including Family Day, the Super Bowl and Chinese/Lunar New Year – all of which carry a concern for people gathering, which would violate the current health orders if it were to be extended beyond the current announced date of Feb. 5.

Henry, however, offered a hint of hope that the restrictions may be loosened at that time – although much depends on the province’s COVID numbers for the next two weeks.

“The restrictions are based on the [COVID] incubation period of two weeks,” Henry said. “Right now, the numbers are concerning in the interior and the northern health regions, so we are monitoring closely to see what makes sense [in terms of restrictions]. Hopefully, if we continue in the current trajectory ... we may have some ability to loosen restrictions. But so much depends on what we do today.”