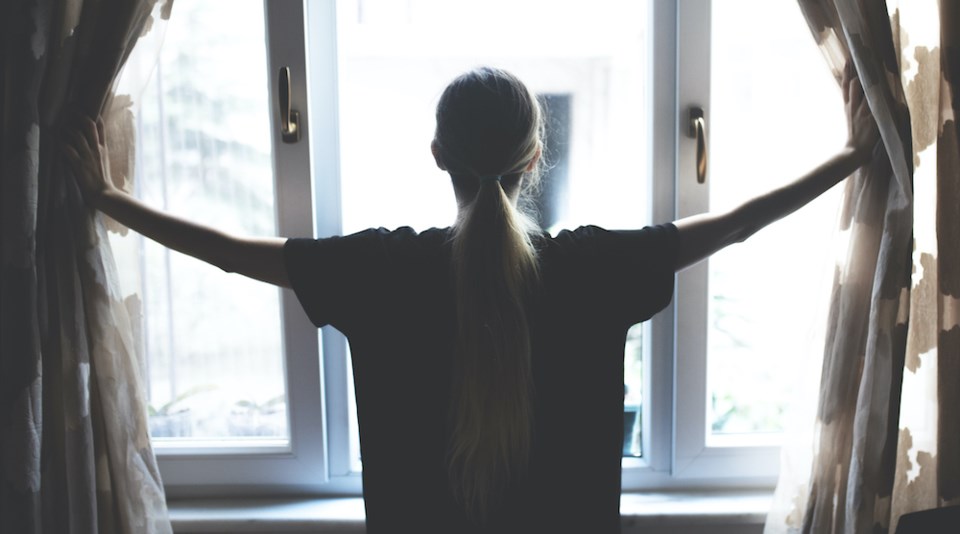 A woman draws the curtains at a hotel. There are 18 government-approved quarantine hotels surrounding Vancouver International Airport. Photo via Xesai / Getty Images

A Vancouver woman who travelled to Mexico after her father died of COVID-19 said her mandatory hotel quarantine stay has raised questions over price gouging and a lack of onsite security.

The federal government’s quarantine hotel policy requires anyone entering Canada from abroad to spend the first three days of their 14-day quarantine in a government-designated hotel. All costs for the three-day stay, which can rise to $3,000 in some cases, are paid by the traveller.

The woman (the Tri-City News agreed not to name her over concerns she would be targeted online for travelling) said she returned from Mexico last week after she was forced to travel to take care of legal documents and her mother’s well-being following her father’s sudden death.

The problems started when she tried to book a hotel.

“I started looking one to two weeks before I booked my hotel,” she said. “Some were crazy expensive — $2,000 for three nights.”

As she waited for her flight details to be confirmed, several of the 18 government-approved hotels didn’t have space.

When she found a room at a hotel on Marine Drive, the price of the three-day mandatory stay hovered at roughly $600, she said. Three days later, it shot up to nearly $1,200.

“I don’t know who is setting the cost of the hotels,” she said. “It just pisses me off that they are making profit from it. They are taking advantage of the situation.”

The Tri-City News reached out to hotel management and owners, but at the time of publication, neither had responded to questions posed over the phone and by email.

Still, said the woman, $1,200 was relatively cheap, so she booked it before it was too late.

Immediately, she was sent an email confirmation that she would be a designated COVID-19 hotel guest and was told a shuttle would be waiting for her upon arrival at Vancouver International Airport.

When the woman arrived at YVR, she said she waited 15 minutes before getting picked up and brought to the hotel. Inside, she was given a choice of a few rooms and a few meal options.

“They told me there were going to be security guards on every floor to make sure nobody leaves,” she said.

That’s in line with federal government requirements, which require designated hotels to maintain “secured, controlled and monitored entry and exit points” and “measures in place to monitor travellers' compliance with mandatory isolation requirements (such as movement within hotel),” according to the government of Canada.

Over the next 24 hours, the Vancouver woman said she had to put up with constant construction noise outside her window, and said she was made to feel like she was a second-class guest because of her quarantine status.

Another red flag was raised when a group of her friends tried to drop off a welcome home package to make her three-day quarantine more comfortable. But when they arrived and tried to leave the package at reception, they were told to go upstairs to the woman’s hotel room.

“They just dropped it off on the front door,” she said, incredulous. “Who’s to say people can’t get into the rooms?”

A little more than a day into her three-day stay, the woman said she received confirmation that the COVID-19 test she had taken on arrival came back negative.

But when she left the hotel, she blew by elevators to reception without anyone stopping her - in apparent violation of federal requirements.

“I just left the hotel. I never saw security guards,” she said. “I showed my results to the lady in the reception — I was the one showing her the results.”

A spokesperson for the Health Canada and Public Health Agency of Canada said it would not comment on individual cases. When the Tri-City News requested information on how federal authorities ensure hotels are in compliance with its rules, the spokesperson did not answer, citing a busy workload and redirecting the News to the ministry’s website.

The Vancouver woman isn’t the first one to question the way the federal government has implemented its hotel quarantine program since it was put into practice Feb. 14.

On Monday, a constitutional rights advocacy group out of Ontario lost in its bid to have an injunction placed on the hotel quarantine program while waiting for the courts to rule on whether the policy is constitutional.

The Canadian Constitution Foundation was acting on behalf of five individuals who had to leave Canada for compassionate purposes, three of them to attend to a dying parent.

The foundation argues in its legal application that hotel quarantine requirements are "overbroad, arbitrary and grossly disproportionate."

The judge, however, said the public interest in preventing the spread of COVID-19 and variants of the virus outweighs the arguments in favour of an injunction that would temporarily suspend the order, which is set to expire on April 21.

For the Vancouver woman, who now remains at home waiting out her 14-day quarantine, doing her part to stem the spread of COVID-19 is a top priority but doesn’t mean the hotel quarantine policy should be immune from criticism.

“Everyone’s situation is different, but in my particular case, it wasn’t that easy,” she said, noting she saw people in the airport coming to Canada for work, coming home from vacation and to immigrate.

“I went to Mexico because my dad passed away from COVID.”

At the same time, she questioned how a hotel without security is any better than a safe quarantine at home.

“It just adds up stress, money and it’s unnecessary,” she said. “I could have used this money to leave for my mom.”

—With files from the Canadian Press