Cases of the virus are now half what they were two weeks ago on the North Shore, but hospitalizations remain high as Lions Gate hospital battles an outbreak
May 5, 2021 6:35 PM By: Jane Seyd 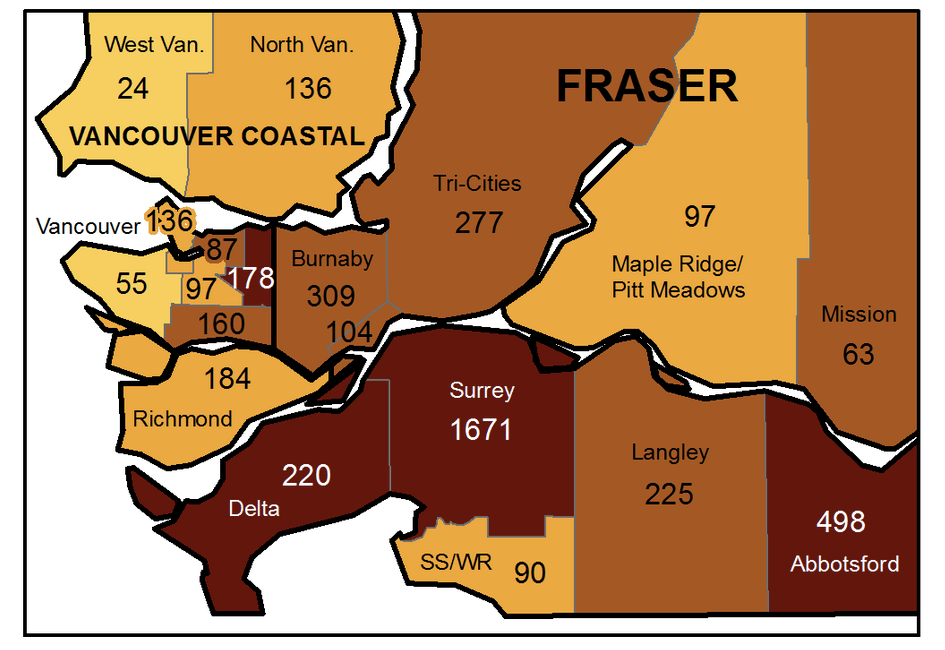 A map showing the geographic distribution of COVID infections in the Lower Mainland for the week ending May 1.BC CDC

There is good news for the North Shore in numbers released Wednesday from B.C.’s Centre for Disease Control.

The number of new COVID infections on the North Shore has fallen dramatically in the past week.

The number of new COVID cases has dropped by about 100 in the past week and is now approximately half the number of cases being reported just two weeks ago. The rates of daily infection in both North and West Vancouver have also dropped.

There were 161 new cases of coronavirus on the North Shore for the week ending May, according to B.C.’s Centre for Disease Control. That’s compared to 261 cases that were reported the week previously and 327 cases reported two weeks ago.

Of the cases reported in the past week, 136 are in North Vancouver and 24 are in West Vancouver.

More good news is that the number of cases has also dropped in many other areas of the Lower Mainland this week. Case counts are down in several parts of Vancouver, as well as Richmond, the Tri-Cities, Burnaby and Maple Ridge. Cases of the virus are still high in some areas of Fraser Health, especially in Surrey and Abbotsford. But even cases in Surrey dropped slightly this week.

Cases in Whistler and the surrounding Howe Sound communities, including Squamish, have also continued to drop this week, with 39 cases reported this week compared to 50 cases last week and 131 cases the week before. That follows special targeted vaccination drives by Vancouver Coastal Health in both Whistler and Squamish.

Lions Gate Hospital is continuing to grapple with an outbreak of COVID-19 on two of its fourth floor wards. Unofficial reports put the number of patients and staff who have contracted the virus in the hospital at close to 30. Including those who contracted the virus in the recent outbreak, there were over 45 COVID patients in Lions Gate Hospital as of Tuesday, according to unofficial reports.

Some elective surgeries at Lions Gate Hospital have been cancelled to free up staff to care for the most seriously ill COVID patients.

In the Vancouver Coastal Health region, there are currently 1,465 active cases, including 123 people in hospital and 45 in critical care.

The positivity rate among those tested for COVID in Vancouver Coastal Health is hovering at about six per cent.

About 1.9 million people in B.C. have now received a first dose of vaccine.

Here are the answers to the top 5 most asked COVID-19 vaccine questions from ImmunizeBC
May 5, 2021 11:00 AM
Comments