Erin O'Toole made a pit stop to rally the party faithful on the North Shore, where 3 seats are among those Conservatives hope to win back from the Liberals

Jane Seyd
Sep 4, 2021 10:41 AM
Previous Next
1 / 1 Conservative Party leader Erin O'Toole made a campaign stop in North Vancouver Sept. 3 to rally candidates and supporters in the North and West Vancouver ridings.Deb Ransom
Expand
Previous Next

With 17 days left in the federal election campaign, Conservative leader Erin O’Toole made a stop on the North Shore Friday night to offer a boost to local candidates and supporters.

O’Toole met with local Conservatives at an event in North Vancouver’s Maplewood neighbourhood.

A Conservative stronghold in the past, North Shore ridings flipped to the Liberals in 2015. Liberals held on to those seats in 2019.

Gerald Baier, a North Shore resident and professor of political science at the University of British Columbia, said O’Toole’s stop on the North Shore is indicative of the party’s desire to win back those seats. “We have 17 days left, so every place they go is very symbolic of where they're hoping to make gains,” he said.

Greg Lyle, a resident of the West Vancouver - Sunshine Coast - Sea to Sky riding, and president of Innovative Research polling, said the North Shore seats are traditional swing seats between the Liberals and Tories.

He said North Shore seats are crucial because “if you look at the pattern of the last 20 years, you just do not form government if you do not have a North Shore seat,” he said.

Generally, “The three of them go to the winning party.”

In an interview shortly before heading out to meet North Shore supporters, O’Toole said the biggest issues facing the North Shore include economic recovery post-COVID and the housing crisis.

“We’re in a really difficult spot. The economy is shrinking and debt is going up,” he said.

Helping hard-hit sectors like tourism is important but so is balancing the books long term, he said.

“We want to help people in the short term, but we have to get the massive spending under control because there's real risks of inflation leading to interest rate increases, and Canada will be in a debt crisis,” O'Toole said.

On issues like housing and climate change, O’Toole stressed he was offering a kinder, gentler Conservative vision than has been seen in the past. “We’re tackling the issues that probably voters maybe didn't think we were tackling enough when we were in government,” he said. “I've said we need to learn the lessons of why we lost the trust of some of the folks in the North Shore.”

On housing, O’Toole said his party is calling for a ban on foreign ownership and more purpose-built rental housing.

On vaccine mandates, O’Toole said he’s a strong supporter of vaccines, “But it is a personal health decision. And I've always said, let's inform and educate and persuade as opposed to force or threat, which is what Mr. Trudeau did just on the eve of an election.”

“Let’s not divide people when it comes to vaccine hesitancy and concerns. Let's inform them about the safety and effectiveness of vaccines.”

Both Baier and Lyle noted on the North Shore, the West Vancouver riding is the biggest wild card. “It’s just a wacky riding,” said Baier, noting the large geography and diverse demographic makeup of the riding mean it’s difficult to predict.

While the Liberals have held the riding in the past two elections, with the NDP running a strong candidate in the riding this time, it’s possible a vote split between the Liberals and the NDP could hand the riding back to the Conservatives, said Baier.

Lyle added while the riding is still more likely to go to the Liberals or Conservatives, it’s also not beyond the realm of possibility the NDP will lure votes from disaffected Liberal and Green voters to pull off a surprise win there. 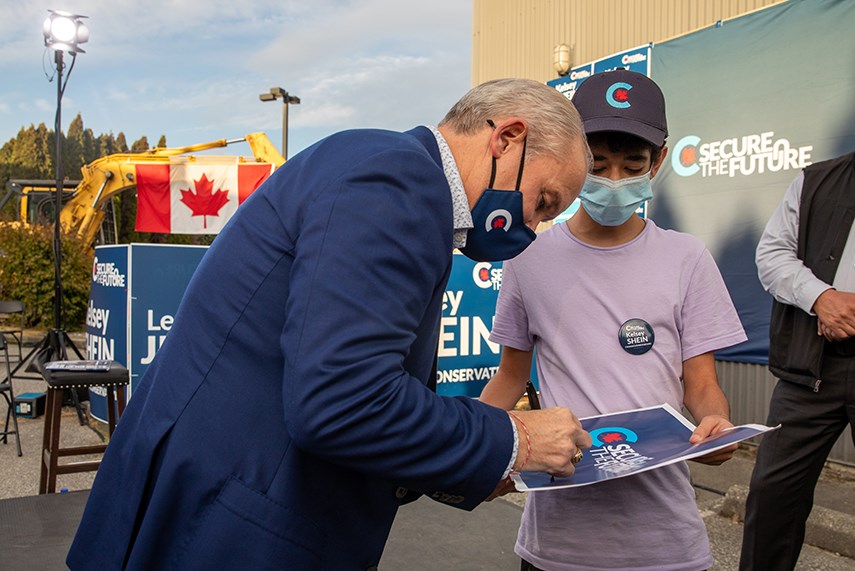