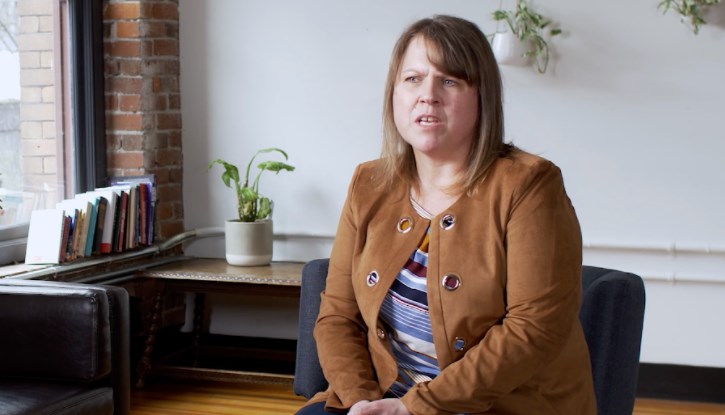 Darlene Bennett has filed an initiative petition with Elections BC under the “Surrey Police Vote” campaignSurreyPoliceVote.ca

Elections BC has approved a petition to hold a binding referendum on the Surrey police transition.

However, the petitioners concede the petition will not meet the official threshold to bind the provincial government to holding the referendum.

Darlene Bennett, the widow of a murdered bystander in Surrey, has joined forces with the RCMP’s union, National Police Federation (NPF), to launch the petition.

Although the petition is based on B.C. legislation that allows voters to sign a “citizens’ initiative process,” it will be symbolic in nature because any successful petition under the Recall and Initiative Act must receive signatures from 10% of registered voters in all 87 electoral districts, and canvassers intend to focus collecting signatures from the nine Surrey provincial electoral districts. Anyone in B.C. can, however, sign the petition.

Nevertheless, the petitioners hope a strong showing will force the hand of the BC NDP cabinet to call a referendum regardless of the petition’s official status.

Canvassers will have from August 16 to November 15 to collect signatures from registered voters who are verified by Elections BC.

Even if the canvassers were to get 10% of registered voters on board from all 87 districts, government would then choose between introducing a draft bill (to call a referendum immediately) or sending the initiative to the Chief Electoral Officer to hold a referendum in the City of Surrey, which would be scheduled to take place on September 30, 2023 – well into the expected transition.

“Individuals or organizations who intend to oppose the initiative, conduct initiative advertising or canvas for signatures must be registered with Elections BC. The deadline to apply to be an opponent of the initiative is Monday, July 19, 2021,” notes an Elections BC statement Thursday.

Lobbying for the police union is Bill Tieleman, who successfully petitioned against the Harmonized Sales Tax in 2011. NPF states it has about 20,000 members and there are about 850 Surrey RCMP officers.

If the petition is successful in Surrey, the group hopes to use it as political leverage.

So far, the BC NDP government has been hands-off of what is largely a municipal matter – although opponents suggest there will be a ripple effect on regional and provincial policing as the transition unfolds (such as recruitment from other detachments).

Tieleman told Glacier Media it is a “flaw” in the Recall and Initiative Act to require the entire province to sign a petition for a regional matter.

In April, Surrey councillor Brenda Locke called on city council to ask the province for a referendum, but the Safe Surrey Coalition (SSC) denied the motion.

Norm Lipinski, the new chief of the Surrey Police Service, says some active officers could be deployed as early as the end of the year, although he concedes the full implementation is at least two years away.

Following the announcement by Elections BC on Thursday, police transition proponent Mayor Doug McCallum issued the following statement to media:
"Transitioning to an independent police service was the #1 election issue for residents in 2018, and shortly after this Council was sworn in, it unanimously voted in support of the Surrey Police Transition. The Province has said before that it is not interested in a referendum, and this will not change, as they have been supportive of the transition since day 1.

"The idea of a provincial referendum on a municipal matter is extremely dangerous for every city’s democratic process. Our residents are clearly in support of this transition, and we are pressing forward every day, moving closer to fully operating the Surrey Police Service.
This will not slow down the building of our own independent Surrey Police."