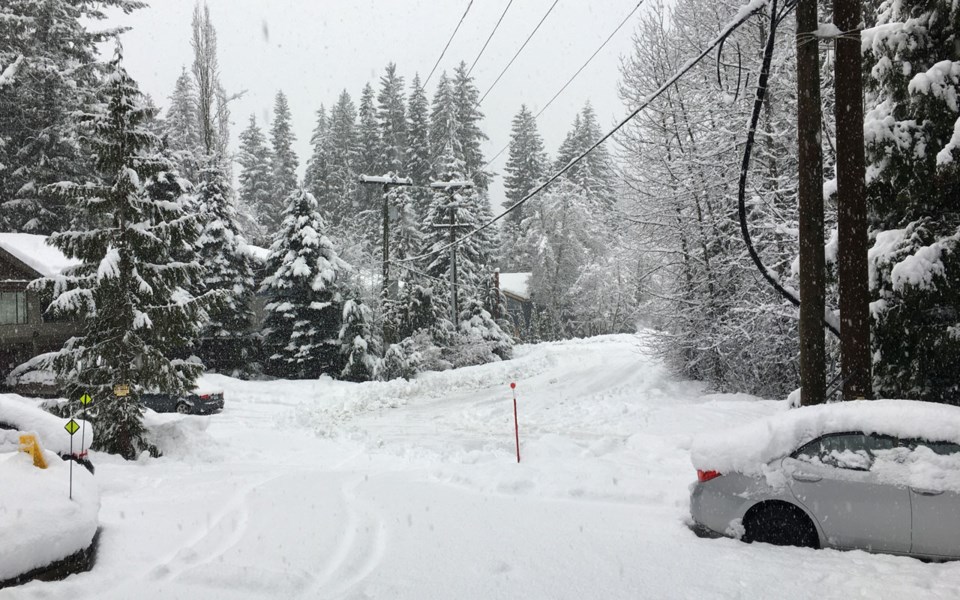 With 15 to 20 centimetres of snow expected to fall on Tuesday afternoon, Environment Canada issued a snowfall warning for Whistler and the Sea to Sky early this morning.

“Snow is expected to begin later this morning as a frontal system moves into the region. Periods of heavy snow in the afternoon will continue into the evening before tapering off overnight. Warm air moving into the region may lead to snow becoming mixed with rain overnight,” the warning reads.

Drivers should also anticipate low visibility during periods of heavy snow and be prepared to adjust their driving to conditions. Check drivebc.ca before heading out.

The snow continues a trend that has seen Whistler get walloped with snow in recent days. In its Tuesday morning update, Whistler Blackcomb (WB) reported 181 cm in the past seven days.

As of 10:45 a.m. Tuesday morning, 18 of 27 WB lifts are open as Symphony Express, Harmony 6 Express, Peak Express, Franz’s Chair, Olympic Chair, T-Bar, Showcase T-Bar and the bubly Tube Park are all closed while 7th Heaven Express is on hold. 90 per cent of terrain is open, however.

Avalanche Canada’s report for today, released on Monday night and valid until today at 6 p.m., noted the avalanche risk in the alpine and above the treeline as considerable and below the treeline as moderate.

“Avalanche hazard will increase as snowfall resumes and fresh storm slabs build in the afternoon. Be on alert for signs of instability in recent snow,” the report reads.