‘Yearbook’ is a collection of true stories the actor hopes are just funny at worst, and life-changingly amazing at best

When he’s not making pottery or bashing U.S. senator Ted Cruz on Twitter, Seth Rogen has been busy making a book. A book his mom wrote a press release for and it’s about the most wholesome thing ever.

The Canadian/American actor’s biographical work is called Yearbook and it features a collection of funny personal essays written by Rogen. The actor himself describes Yearbook as a collection of true stories that he hopes are “just funny at worst, and life-changingly amazing at best.”

I wrote a book called Yearbook. It’s true stories and essays and stuff that I hope you think are funny. It comes out in May, but if you like you can order it now. Yay! https://t.co/Cqwwi4qq3o pic.twitter.com/nDxwBqnkp8

Nearly all the marketing for the book is done in Rogen’s classic tongue-in-cheek style. The about page selling his book mentions his involvement in Superbad, Pineapple Express, The Disaster Artist, Neighbors, and The Boys for the sole purpose of being more algorithm friendly.

“Hi! I’m Seth! I was asked to describe my book, Yearbook, for the inside flap (which is a gross phrase) and for websites and shit like that, so… here it goes!!!” the actor wrote, going on to describe what is beyond that (moist?) inside flap.

The stories range from the beginning of Rogen’s career when he was doing stand up in Vancouver and at bar mitzvahs, to his time at Jewish summer camp, his eventual move to L.A., and way more stories about doing drugs than his mother would like. 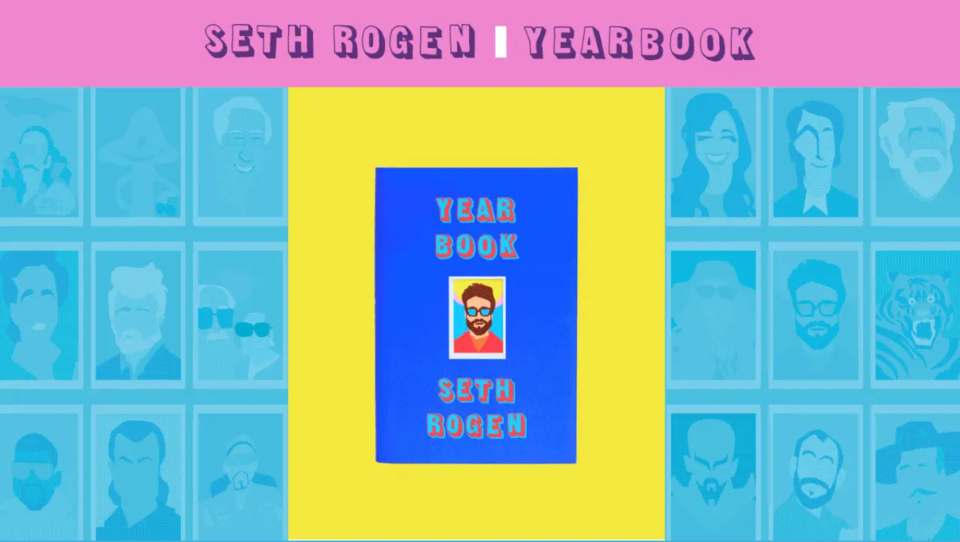 The publication date of Seth Rogen's biographical work 'Yearbook' was released along with his mom's thoughts on the amount of references to drugs included in it.

"At first I was worried that Seth was writing a book, because I was like, 'Oh no! What's he gonna say?!'" said Rogen's mom, Sandy, in a press release from the publishing company. "I was actually scared to even read it. But I'm very happy I did. It's not really a memoir, like I thought it might be. I guess it's more of a bunch of funny stories? Does that make sense?"

My mom wrote my press release for my book. https://t.co/jWPIswAZ02

"If I'm being honest, I really wish there wasn't so much drug talk," she continued. "Why does he need all that? It's like 'We get it!' And some of the stories? I mean, they're entertaining, but I was just shocked they happened and he never told me! Overall, I think it's more sweet and funny than anything, so I like it, and I'm glad he wrote it, but I'd be even more glad if he called me more."

Crown, an imprint of the Random House Publishing Group says the book will be published on May 11 but it is up for pre-order right now.