Despite the added cost and an additional one-year delay, Horgan government commits to damming the Peace River.
Feb 26, 2021 11:00 AM By: Nelson Bennett 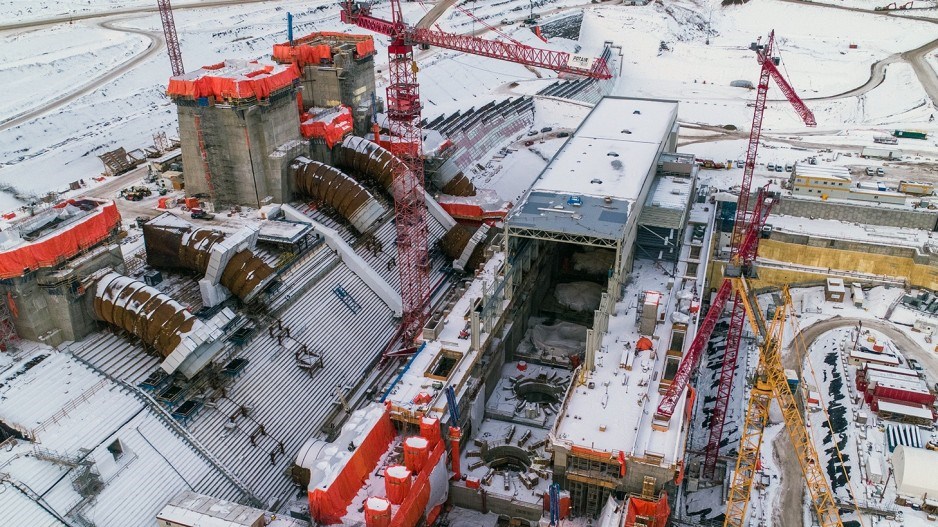 Site C dam powerhouse, just part of the more than $6 billion worth of work already done.Courtesy | BC Hydro

The John Horgan government will finish building Site C dam, despite new estimates that now put the cost of completing the dam at $16 billion.

The dam will also be one year behind schedule in completion and commissioning.

The impact for BC Hydro ratepayers of the new price tag is estimated to be an additional 3% rate hike -- about $36 per year for the average BC Hydro residential customer.

But cancelling the project now would be an even worse deal for taxpayers, the government concludes.

"Cancelling Site C when it was half done would have meant laying off 4,500 workers, just as we're coming out of the impact of the pandemic," Premier John Horgan said in a press conference Friday. "It would have left us with a $10 billion debt and nothing to show for it.

"That $10 billion debt would have meant a rapid increase in rates for people -- on average about $216 a year -- starting right away, and that was also something we were not prepared to do."

He added that the project was one that his government would never have started in the first place, but also noted that some of the cost overruns the project now faces are ones that no one could have anticipated.

"The COVID-19 pandemic has presented challenges and construction delays that we could never have foreseen," Horgan said.

A report by former B.C. bureaucrat Peter Milburn concludes cancelling the project would result in a $10 billion write-off, which would have to be borne by taxpayers or ratepayers, and would potentially result in credit rating downgrades for both BC Hydro and the B.C. government, affecting borrowing costs for both.

The decision to complete the dam on the Peace River was announced Friday, following the release of the findings of two reports.

One was from Milburn, who was asked to review the project's finances and budget, after BC Hydro informed the BC Utilities Commission (BCUC) that the project now faced new cost pressures and delays.

Milburn's report was itself delayed by several months. It had been completed in October, but Horgan's decision to call a snap election meant it could not be considered during the interregnum. And it was delayed further still after Horgan decided to call for another report -- a technical review of proposed engineering fixes to address geotechnical issues.

According to a technical briefing based on Milbrun's report, a slowdown of work resulting form the COVID-19 pandemic in 2020 was partly to blame for putting the project behind schedule. But geotechnical issues on the right bank were also identified that are expected to drive up engineering costs.

The Horgan government tapped two dam geotechnical experts to look at safety issues. The government wanted to know if the dam might pose safety risks, as a result of the geotechnical issues, should it be completed.

Those experts – John France and Kaare Hoeg -- concluded the dam will be safe and reliable. But there will be additional costs to shore up the right bank, where critical infrastructure, including the spillway and generating station, are located.

"We're confident that the project can and should be completed safely," Horgan said.

According to technical briefs released Friday, the delays from the pandemic and the geotechnical issues account for about 50% of the anticipated increased costs of finishing the dam project.

Proposed enhancements include extending a concrete foundation deeper into bedrock. The two geotechnical experts consulted by the B.C. government concluded that those enhancement "are appropriate and sound, and will make the right bank structures safe and serviceable over the long operating life of Site C."

To date, roughly $6 billion has been spent on the Site C dam project, which is more than 50% built. Construction activities to date include the diversion of the Peace River.

Dam critics have been calling for the project to be halted since before it was sanctioned by the previous Liberal government under Christy Clark.

Many have said it was a mistake to green-light the project in the first place, given a demand for power in B.C. that has in recent years flat-lined, and given the falling costs of wind power.

But were the project to be cancelled now, someone would need to pay for the $10 billion in sunk costs and remediation.

If the BCUC determined that those costs should be covered by BC Hydro ratepayers, it would result in a 26% rate hike over 10 years, the Milburn report estimates.

At the new price tag of $16 billion, paying for Site C dam is expected to result in an additional premium increase of 3% over and above what was expected at $10.7 billion.

The cumulative premium rate increase was originally estimated to be 11.4% at a $10.7 billion capital cost. So, the new rate impact for BC Hydro ratepayers will now be 14.5% increase, between 2025 and 2029.

However, it will be up to the BCUC to determine how how those premium hikes will be implemented. It could be in one large single hike, or spread over a period of years.

"We're moving forward on all of those recommendations," Horgan said. "As well, we're putting on new leadership on the board of BC Hydro."

Horgan said BC Hydro chairman Ken Peterson will be replaced by Doug Allen.

Asked if the B.C. government might ask for a public inquiry into Site C, as was done with the Muskrat Falls project in Labrador, Bruce Ralson, minister of Energy, Mines and Low Carbon Innovation, answered with a terse "no."

The Muskrat Falls dam project is also facing a doubling of its costs. An inquiry into that project's overruns concluded that, for large hydro-electric dam projects, cost overruns are the norm.