Each case will be reviewed individually, and people who were arrested without resistance will be dealt with more leniently.
Jul 20, 2021 9:53 AM By: Louise Dickson 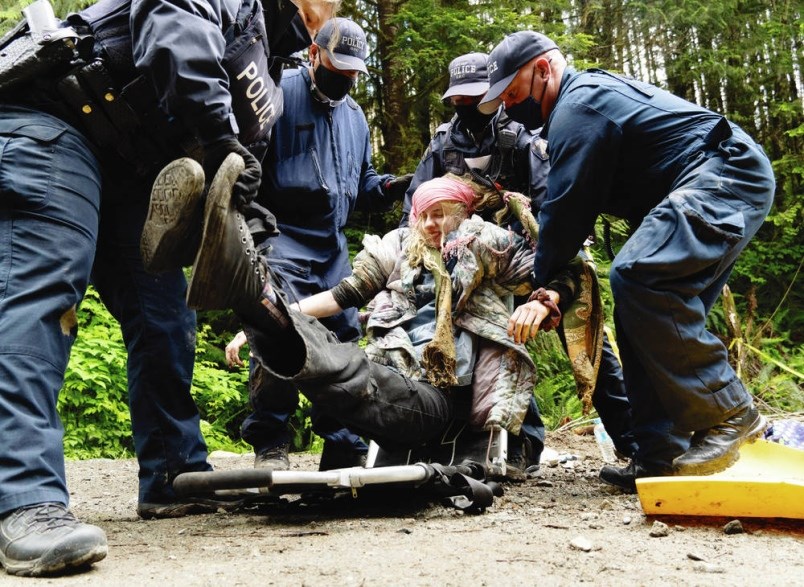 RCMP officers lift a protester to a dolly to detain her as they enforce an injunction against blocking a road to prevent logging of old-growth forests near Port Renfrew in early June.Norman Galimsk

Hundreds of anti-logging protesters arrested at the Fairy Creek blockades may now face criminal contempt of court charges and the possibility of a criminal record.

The BC Prosecution Service has agreed to review the arrests of more than 400 people for allegedly breaching a court-ordered injunction granted to forestry company Teal Jones. The injunction was intended to stop protesters from blocking roads to prevent the logging of old-growth forests in Tree Farm Licence 46, north of Port Renfrew.

In a statement Monday, the prosecution service said it has concluded there is a substantial likelihood of conviction for criminal contempt and a strong public interest in prosecuting criminally the alleged breach of the injunction.

Since August 2020, members of the Rainforest Flying Squad and other environmental activists have set up moving blockades in their bid to prevent logging and road-building in old-growth forests.

Kathleen Code, spokeswoman for the Rainforest Flying Squad, said Monday the decision won’t stop protesters, and merely serves to relieve Teal Jones of the financial burden of having to prosecute people — of “having to find people and serve them properly.”

“People are still willing to put themselves on the line to protect old-growth forests, no matter what the consequences,” she said. “This is not a surprise and people are still coming to the camps. What this amounts to is another corporate subsidy for Teal Jones.”

The decision by the prosecution service to consider criminal contempt charges “reflects the seriousness of the ongoing illegal activity still being undertaken months after the court’s well-reasoned injunction order,” said Teal Jones.

The blockaders have repeatedly stated they have no intention of following the law, even after the province deferred logging in areas including Fairy Creek, the forestry company said. And the blockaders are defying requests by local First Nations hereditary and elected chiefs that they leave the area and allow lawful forestry activities to continue outside the deferral areas.

Prosecutor Trevor Shaw said each case will be reviewed individually, and people who were arrested without resistance will be dealt with more leniently than those who slowed down enforcement by chaining themselves to obstacles or other protesters, or chained themselves inside pipes.

The location of trials and number of judges has not been determined. The plan is to set aside two weeks for each trial with 10 defendants per trial, the statement said. A half-day case management hearing is to held by phone on Sept. 13 for all defendants.

The BC Civil Liberties Association says sentences are considered on a case-by-case basis.

“Because judges have discretion in sentencing, it is difficult to pre-determine what a sentence may be for a conviction of criminal contempt of court,” it said.