Indigenous community near Quesnel gets clean drinking water after 20 years

Thanks to a partnership with UBC Lhoosk'uz Dené village now has clean water
Jul 13, 2021 3:42 PM By: Hanna Petersen 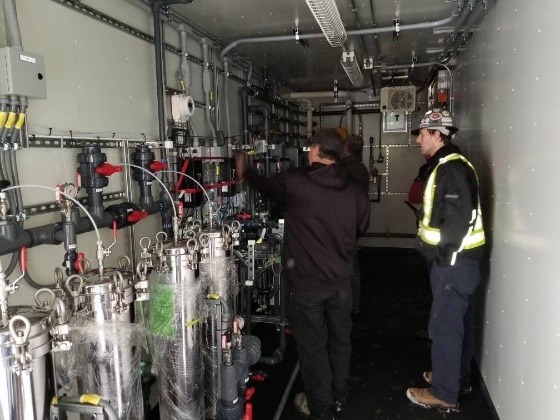 After decades of relying on bottled water an Indigenous community west of Quesnel now has a steady supply of clean drinking water straight from the tap.

A  Lhoosk'uz Dené village of about 50 people, located 200 kilometres west of Quesnel on Kluskus Lake now has clean water thanks to a new water treatment plant crafted for their needs.

Since the early 2000s, the Lhoosk'uz Dené community (formerly known as Kluskus) has relied on untreated water from wells and streams for household needs, and on bottled water delivered year-round.

“We had to do things differently. And now, what was just a dream many years ago is reality,” says Chief Liliane Squinas, in a University of British Columbia (UBC) news release.

The treatment system, which was developed with the help of a team from UBC, relies primarily on ultraviolet light, paired with chlorine disinfection, to ensure clean drinking water that is free of harmful microbes.

The setup is simple enough that it can be operated, maintained and even repaired without relying heavily on specialist skills or pricey components.

Water treatment solutions for remote communities often founder for a variety of reasons, for example, the system could be complicated or too burdensome to keep running or times the solution could be simply too big for local conditions.

Lhoosk'uz Dené members were determined to get it right and to build a system that was scaled to their needs, produced good-tasting and safe drinking water, and was easy to maintain and repair.

That’s when the community invited a team from UBC’s faculty of applied science and the RESEAU Centre for Mobilizing Innovation to work with them on a solution.

“We’re so off-grid that many people don’t even know where we are. Even the nearest hospital is three hours away,” says Chief Squinas. “If the system breaks down, it’s not as simple as going to the nearest hardware store for replacement parts.”

The team is led by chemical and biological engineering professor Madjid Mohseni, who had developed a community-driven and collaborative problem-solving approach known as Community Circle, and is experienced at bringing practical drinking water solutions to rural communities across Canada

In Northern B.C., the team had partnered with Tl’azt’en Nation, as well as Indigenous Services Canada, First Nations Health Authority, and manufacturing and engineering firms to develop a treatment system to combat organic contaminants in the community’s water supply.

The sheer diversity of the communities involved means there is no one-size-fits-all solution, said Mohseni, in the news release.

The Lhoosk'uz Dené community is accessible only by a single logging road, with even more limited access in winter and during the spring thaw. This meant connecting to municipal water was impossible, so community members drew water from a single well.

But the water was muddy and subject to E. coli contamination.

In 2008 two new wells were drilled but they were found to contain elevated levels of iron and manganese. They were also located in a historic burial area and close to a failing septic field.

“More than six million Canadians living in Indigenous and non-urban communities do not have access to reliable clean water to drink. With COVID-19 still a threat, clean water is even more of a necessity,” said Mohseni.

He noted all decisions for the new water treatment system were made in close partnership with the Lhoosk'uz Dené members and grounded in understanding local issues and the community and their perspectives were at the core of the process.

Since the treatment system began operating in May, the community has monitored the water supply quality and seen excellent results—clean, good-tasting water.

Band manager Brenda Thomas said she remembers the day the village Elders took their first drink of water from the tap.

“I had glasses engraved with Too bets`huna, which in our language means ‘We live by water’,” said Thomas.

“As the Elders took their first sips, I had to hold back tears as the reality hit me. We’d done it, after years of waiting, after hundreds of conference calls and numerous forest fires and despite being in the middle of a pandemic. We were resilient and persevered.”

Thomas adds that she hopes the success of the project will inspire other communities looking for solutions to their own long-term challenges.