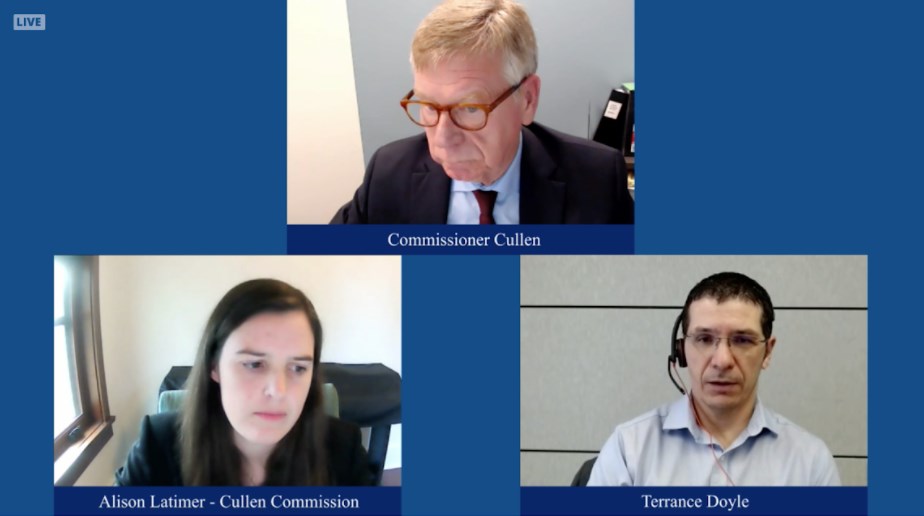 Great Canadian Gaming Corp. interim CEO Terrance Doyle distanced his company from “dreamer” employees who envisioned its River Rock Casino and Resort in Richmond as an international destination for gamblers, including those who may have been seeking refuge from announced government crackdowns on corruption in China and money laundering in the United States in 2012.

Rather than marketing River Rock overseas, Doyle told the Commission of Inquiry into Money Laundering in B.C. on Tuesday and Wednesday that he saw better business opportunities catering to local gamblers, such as “high-value individuals” within Richmond’s Asian community.

McCleery asked Soo whether B.C. would be a destination because of a lack of regulatory oversight. Soo replied that he was only trying to explain to his superiors “what was going on” and, “I can’t say how cash was being scrutinized because that was the work of entities behind us,” such as gambling regulator Gaming Policy Enforcement Branch (GPEB), casino investigators and police.

“They had a refuse button; we had an accept button,” said Soo.

Soo explained the growth at River Rock as reactionary to demand.

“We were serving hamburgers and they wanted steak. So we changed the menu.”

During this time gambling was all cash based. Soo said he and the company proposed a credit program to the B.C. Lottery Corporation (BCLC), the body charged to manage and conduct gambling, but it was never implemented.

Soo was fired by GCGC and launched a wrongful dismissal lawsuit against it, claiming he would be blamed for money laundering.

Doyle said, as COO, he shut off employee marketing trips to Asia in 2013. To what extent GCGC solicited such international gamblers is unclear, however even BCLC officials travelled to Macau after 2013, according to thebreaker.news. And internal reports from BCLC showed reliance on Macau’s “whale gamblers,” the Vancouver Sun has reported.

“There was this concept of bringing in international players and I repeatedly opposed it,” said Doyle, adding Soo “had a grandiose picture of what these casinos could be.”

“It’s bad business to have anyone associated with crime coming into your casino…we did not want those customers in our facility, ever,” Doyle assured Commissioner Austin Cullen.

However, the casino regularly accepted six-figure buy-ins with $20 bills, suspected by investigators to be proceeds of crime. But GCGC and Doyle have stated it was always complying with anti-money laundering (AML) policies and had generally never been instructed by BCLC to stop accepting the cash.

Doyle said River Rock’s prolonged failure to properly report cash buy-ins under $50,000 and deeming buy-ins with $100 bills as not suspicious was not done on purpose and can be explained by a “communications issue.”

That the casino didn’t deem some six-figure buy-ins as suspicious because a known client had brought the money in, was a testament to employees conducting “know-your-client” (KYC) protocols, Doyle explained.

For some time River Rock also effectively exchanged bundles of $20 bills for $100 bills when regular high rollers cashed out upon playing. If they played enough, Doyle said he viewed the $100 bill refunds as compliant with AML rules — despite the clear risk of refining proceeds of crime.

That Financial Transactions and Reports Analysis Centre of Canada (FINTRAC)
found, at one point, roughly 80% of River Rock employees were not abreast on AML policies was chalked up to their poor English language skills, said Doyle.

As an example put forth by Latimer, when a gambler brought in $380,000 in $20 bills bundled in elastics at 2 a.m., the casino’s role was only to document and report.

“We are one part of the system,” said Doyle, adding that by refusing the cash the casino would be getting in the way of a possible criminal investigation.

These cash buy-ins are central to the portion of the inquiry looking at money laundering in B.C. casinos.

What is purported, and largely accepted or uncontested, is that cash from Vancouver’s deadly drug trade, much of it stemming from China-derived fentanyl and Mexican cocaine, made its way through B.C. casinos. It was first collected by so-called underground bank operators in Richmond, on behalf of transnational organized crime networks, and loaned to gamblers, among others. And each time a gambler lost, they would repay the drug cash by other means, including asset transfers to a partner of the local underground bank in China, including Hong Kong and Macau.