An FOI reveals that there is interest in opening a fox farm in B.C.

While it might come as a surprise to you, mink are not the only animals that are farmed for their fur in British Columbia.

The lion's share of fur farms in B.C. is comprised of mink farms. However, one of them is a chinchilla farm.

But a recent Freedom of Information (FOI) request finds that there may be interest in opening another type of fur farm in the Lower Mainland: a fox farm.

Members of the Canidae family, foxes are generally quite shy and timid by nature. The red fox is a common species throughout Canada, but its fur may also be brown and black. "Silver foxes are red foxes that are almost entirely black but with white-tipped hairs," explains The Nature Conservatory of Canada.

While there currently aren't any fox farms in B.C., Lesley Fox, Executive Director of The Fur-Bearers — a charitable organization that works to end the commercial fur trade — tells Vancouver Is Awesome that Canada "used to have over 1000 fox farms in the 1980s."

Attitudes toward wearing fur for fashion have evolved since then, notes Fox, but there are still several fox farms in other parts of the country. According to the last available Statistics from Statistics Canada (2018) there were 27 active fox fur farms in Canada (located in Saskatchewan, Ontario, Quebec, Nova Scotia, Newfoundland, New Brunswick and PEI).

But a recent Research Co. poll found support for killing animals for their fur is extremely low across North America, with the overwhelming majority--81 per cent of Canadians and 75 per cent of Americans--opposed to the practice.

'Unethical and unnecessary': Union of BC Indian Chiefs calls for moratorium on fur farming

The Union of BC Indian Chiefs (UBCIC) announced in April that it was joining the BC SPCA and other advocates as they called for a moratorium on mink farming in B.C.

However, a recent FOI filed by Ban Fur Farms British Columbia (BFF BC) found that the Ministry of Agriculture had received two inquires for the potential establishment of two new fur farms — one in Prince George and the other in Langley. One request was for a fox farm.

The Ministry of Agriculture, Food and Fisheries also confirmed to V.I.A. that it is possible for someone to apply for a fur farm license to farm fox in B.C. at this time.

Fox says fur farms are "problematic for animals, the environment, and human health," regardless of the type of animals being farmed.

"On one farm you have tens of thousands of individuals--and the keyword is individuals. And so, when you have one of those individuals that's sick, the capacity to spread that virus is certainly a domino effect."

But Fox feels the way that foxes are killed in fur farms is hidden from the public, too.

"It's probably one of the biggest secrets of the Canadian fur farming industry," she notes. "Animals are electrocuted — they're anally electrocuted — in Canada," she explains.

"It's not even just legal; it is recommended."

The National Farm Animal Care Council (NFACC) outlines the rules and regulations for farming foxes in Canada in the Code of Practice for the Care and Handling of Farmed Fox.

Both the Canadian Veterinary Medical Association (CVMA) and the American Veterinary Association (AVMA) stipulate that to meet the humane death criteria, the method of euthanasia must lead to immediate and irreversible loss of consciousness and cardiac arrest.

The NFACC states that two people must be present for euthanasia and that it must be done out of sight from other foxes.

Electrocution is routinely practiced as a method of stunning and euthanizing farmed foxes as a single process.

Since foxes must be unconscious before the electrocution, "electric stunning can be done by first passing the electric current through the brain in order to induce a loss of consciousness before electricity is passed through the rest of the body to kill the animal," reads the guideline.

"Can you imagine if we electrocuted dogs at shelters?"

Fox adds that chinchillas are also killed by electrocution. In contrast, the American Veterinary Medical Association (AVMA) recognizes carbon monoxide (CO) as an approved method of euthanasia for mink.

But those methods of euthanasia are "inconsistent" with other ones used for other animals, even other canids, such as dogs, notes Fox. "Can you imagine if we electrocuted dogs at shelters? There would be a public outcry."

Fox also worries that there isn't adequate monitoring of best practices. "There's no enforcement of these regulations or guidelines and so I don't have a lot of confidence a regulatory body is monitoring the practice."

According to the NFACC, for electrocution to be humane, the commercially available equipment specifically designed for euthanizing foxes must:

The NFACC adds that electrocution is preferable to lethal injection for foxes which requires significant handling and restraint that is more stressful for the animal.

As to why shooting the animal isn't preferred, Fox says the answer is simple: bloodstains.

"A gun or shooting bullets put holes in pelts, which can decrease the value of a pelt." 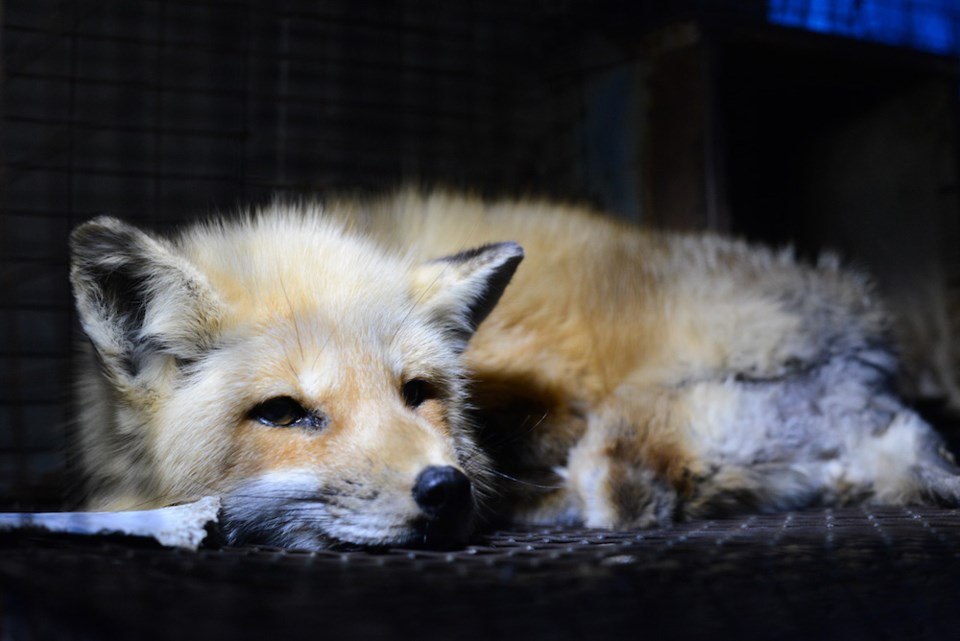 This is Rose. Photo via Jo-Anne McArthur / We Animals Media

The Fur-Bearers is now sharing the story of a red fox named Rose that was discovered by veterinarians on a fur farm in Montreal. The farm was subsequently closed and the owner was found guilty of animal cruelty in 2017; it was the first animal cruelty conviction of a fur farmer in Canada.

According to the Fur Institute of Canada, adult breeding foxes live in wire mesh pens but are provided with "a well-bedded nest box for the reproduction season." It notes that the small canids must have a "protected area" to escape the elements.

The size of the holes in the cage's wire mesh flooring must be "appropriate to the size of the foxes so they do not catch their footpads." The cage for an "individual breeder" must be 36" wide by 36" high and the floor should be at least 15 square feet, according to the updated NFACC standards.

They are also required to have proper health and welfare management procedures in place and be observed daily for signs of ill health or welfare concerns.

For Fox, however, life on a fur farm isn't conducive to a healthy life. Rose, like many other female foxes who are breeders on farms, was "kept isolated in [a] wire cage and impregnated every year."

Rose was eventually "found by investigators missing a leg and her tail" and subsequently euthanized.

With files from Mario Canseco.

'Unethical and unnecessary': Union of BC Indian Chiefs calls for moratorium on fur farming
Apr 7, 2021 7:52 PM