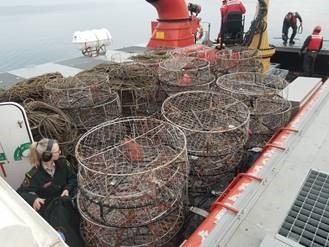 On Thursday, the Department of Fisheries and Oceans (DFO) released the details of the enforcement campaign, which took place Jan. 20, 21, 25 and Feb. 1 and 2.

The operation involved fishery officers from the Langley and Richmond detachments, and the Vancouver-based Whale Protection Unit, working with their Canadian Coast Guard (CCG) colleagues, conducted an enforcement operation in the waters of Boundary Bay, near White Rock. The operation utilized the CCG Hovercraft Moytel as a platform, coordinating with up to three Conservation and Protection patrol vessels, to combat ongoing illegal fishing. The operation followed all COVID-19-related health and safety protocols.

“The joint operation spanned five days and 337 illegally set commercial crab traps were seized and a large number of crab and fish were returned to the water,” said the DFO. “This was a highly successful example of a joint Fisheries and Oceans Canada (DFO)-CCG enforcement initiative that may occur several times per year. Fishery Officers will attempt to identify seized traps and gear and investigate further to identify the perpetrators. Charges may follow.”

The DFO said this was the first time that a CCG hovercraft from the Sea Island Base was utilized for this kind of joint operation. While each agency operated within their mandates while on the water, they shared operational knowledge while working together to ensure the success of the operation and each gained a deeper understanding of the other’s roles and responsibilities, added the DFO.

“DFO may conduct similar trap retrieval operations several times and at different locations, each year to retrieve lost, abandoned or illegally set gear that are out of compliance or ‘ghost fishing,’” said the DFO. “Gear that is not in compliance with the regulations under Canada’s Fisheries Act can include: a lack of proper floats identifying the location of gear; a lack of proper markings or tags on floats and crab traps; fishing more than the allotted amount of gear; fishing traps without escape mechanisms or rot cord to enable escape mechanisms (to work properly) should the gear ever become lost; and fishing in closed or prohibited areas (e.g., U.S waters).”

Note: a string is a groundline with the multiple traps attached. In this case officers encountered some as long as 1.6km and with as many as 21 traps attached. Because these lines do not have the required identification floats a dragger (a form of a grappling hook) has to be utilized to snag the string and haul it to the surface.

Some ghost fishing traps were also removed from the waters of Boundary Bay, or destroyed in attempts to drag them in (they break open when stuck in the mud, ensuring that they can no longer fish and trap fish or invertebrates).

As part of the work to end illegal fishing activity, the DFO asks the public for information on any suspicious or potentially illegal activities, or any contravention of the Fisheries Act and Regulations. Anyone with information can call the toll-free violation reporting line at 1-800-465-4336 or via email at DFO.ORR-ONS.MPO@dfo-mpo.gc.ca.