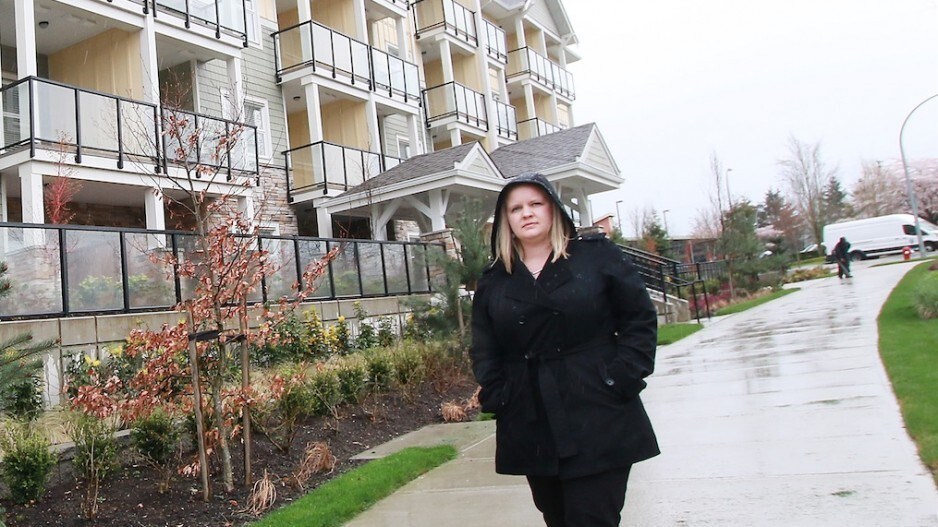 Elyse Vroom walks in front of Murrayville House, where she bought a pre-sale contract for a home. She then found out that when the developer went into receivership, BC Supreme Court would nullify the contract.Photo by Rob Kruyt/BIV files
Notorious Vancouver area developer Mark Chandler was sentenced to six years in prison Monday after pleading guilty to wire fraud in California.

United States District Court judge Hon. Percy Andersen, for the Central District of California, tacked on an additional 21 months to the 51 months United States attorneys had requested in a sentencing memorandum last December.

The state described Chandler’s actions as “an extensive fraudulent scheme” whereby he solicited investors for a real estate development in Los Angeles, only to spend their money on a lavish lifestyle.

Lies built upon lies is how officials described Chandler’s defrauding of 12 victims of just over $1.7 million, which Andersen has ordered Chandler to repay.

Chandler depleted people’s retirement savings and secured four bank loans with his victims’ properties. One victim was rendered homeless and another lost $749,453.

Banks foreclosed on some properties and two victims filed for bankruptcy.

His scheme, carried out between 2009 and 2011, involved writing fake cheques back to his victims and providing them with fake bank and investment documentation.

His criminal conduct “not only financially devastated his victims, but also caused severe emotional distress,” the state argued.

Chandler would take money and loans and spend it on himself, the court found. He is said to have used the funds to support his lifestyle, “including buying a Mercedes-Benz, transferring approximately $20,000 to his ex-wife, chartering a private yacht, travelling to Las Vegas, making luxury purchases at Ferrari/Maserati, Michael Kors, and Ermenegildo Zegna, and spending thousands more at various high-end restaurants.”

In an email written by Chandler and obtained by authorities, Chandler stated he needed fake cheques so he could put on a “dog and pony show … to play with these new investors.”

Chandler was also ordered to have three years of supervision upon his release. Sentencing documents show he had a history of criminal behavior, including spousal battery in 2009 and felony theft in 2003, in Arizona.

After his Los Angeles fraud scheme, Chandler made his way back to the Lower Mainland in 2011 and established a shell company to allegedly conduct fraud, though Canadian authorities have not pursued claims against him.

Chandler marketed Langley condo development Murrayville House in 2015. In September 2017, the Office of the Superintendent of Real Estate (OSRE) issued a cease marketing order against Chandler’s company. Subsequently, a receiver was appointed to the development, and it was determined Chandler had secured 149 purchasers for 91 units and was unable to account for $12.2 million paid to his development company, according to a Mutual Fund Dealers Association (MFDA) hearing notice against Chandler’s associate and chartered accountant, Vasant Patel.

After Chandler was extradited in December 2019, Patel was banned in June 2020 by MFDA from conducting securities-related business in any capacity with a mutual fund dealer.

Chandler and his company, 0981478 Ltd., still face a notice of hearing from the (OSRE), although the hearing is postponed indefinitely. The allegations contained within the OSRE notice remain unproven.

No one involved in the Murrayville House condo marketing scheme has been criminally charged in Canada, but Chandler and his companies face several civil proceedings.

Some scorned buyers, whose contracts were nullified, told Business in Vancouver in 2018 that their experience is evidence that the B.C. government needs to step in with strict guidelines for developers conducting pre-sales, and to issue fines when developers break rules and sell units multiple times and pocket deposits without putting them in trust.

What exasperated buyer Elyse Vroom, for instance, is that Chandler had been in receivership before yet escaped being banned from developing further.

His Chandler Homer Street Ventures Ltd. fell into receivership in early 2008 after the BC Supreme Court, in 2007, separately froze $35 million of Chandler’s assets after investors alleged he misrepresented real estate deals and forged a multimillion-dollar mortgage document.

—With files from Glen Korstrom/Business in Vancouver

Coquitlam man agrees to repay investors after using their money to gamble
Feb 1, 2021 11:06 AM

Mounties investigating after City of Prince George hit with 'sophisticated' computer-based fraud of more than $700K
Nov 10, 2020 10:35 AM
Comments