Tims was "egg-cited" to debut the new feature. Now the people are revolting...because they say the eggs are revolting.
Feb 8, 2021 9:00 AM By: Lindsay William-Ross 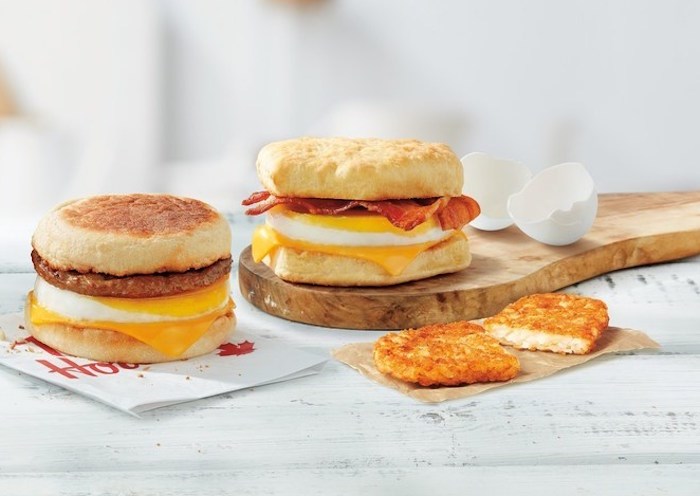 Have you tried the new Tim Hortons breakfast sandwiches with a 'freshly cracked egg' inside? Some Canadians have and they are very unhappy. Photo via Tim Hortons

Earlier this month, Tim Hortons was "egg-cited" to debut a fresh new tweak to its breakfast menu nationwide. The Canadian coffee and doughnuts chain has replaced its uniform omelette-style egg patty with a "freshly cracked egg" in its breakfast sandwiches, and the people are revolting...because a lot of them find the new egg revolting.

An online petition is urging the fast food chain to go back to its roots and re-embrace the not-fresh egg.

"Tim Hortons has removed our beloved egg patty so it could be replaced with some freshly cracked mutiny," writes Sammy Wade in their Change.org petition called "Bring Back the Tims Egg Patty!"

"The freshly cracked egg is gross, rubbery, and stringy for some odd reason. It needs to be put down," adds Wade.

For some Timmies fans, the new eggs have been invading their morning meals for some time now, as the chain tested out the offering in select locations. However, earlier in February, Tim Hortons made it a done deal.

"The journey to building a better breakfast for Canadians by moving to freshly cracked eggs in restaurant kitchens — using 100 per cent Canadian Grade A large eggs — included a series of test markets, which were closely monitored and studied for guest satisfaction," reads the official Tim Hortons news release about its freshly cracked eggs roll-out.

Satisfaction is not evident among the over 1,360 people who have so far signed Wade's petition.

The reasons people are calling on the chain to go back to its omelette patty ways vary in scope from a general objection to eggs being cooked with the yolk and white remaining distinct, to some pretty gnarly descriptions of its taste, texture, and ability to slide. There are also lots of people bringing up Tim Hortons' breakfast sandwich competition, namely McDonald's and A&W Canada, and the fact that these customers have rejected those fast food chains' more egg-like eggs and see no reason why Tim Hortons wants to offer the same thing.

"I am incensed that the egg patty was changed," says Mary Danieli, who signed the petition. "This new version is definitely rubbery. The cheese doesn't even stick to the egg - it slides right off and into my lap. If I wanted rubbery, overdone eggs, I`d go to McD`s. Seriously, this was a shitty concept that you took from another fast food joint. Bring back the patty, please."

"I bit into a farmers breakfast wrap only to find this disgusting atrocity. Rubbery, flavorless, completely detracted from the rest of it. If this doesn't revert back I'm going to have to find breakfast elsewhere," says Mark Cameron.

Other objections include terms like "nasty af," "vomit," "very wet," "disgusting," "gross," and lots of remarks about it not smelling good.

"Just ordered a sandwich and got a white puck of death. One bite made my stomach turn, not even my dog was excited to eat it," adds a petition signer named Braeden H, sliding in nicely with a hockey reference for a company created by a Canadian hockey player.

Of course, some are seeing this as a matter of national pride:

"What does it mean to be a Canadian? Maybe some hockey, waterproof money, and most importantly, Timmies breakfast. Our country is on the verge of losing everything that makes us good and just," pleads Wade in their petition.

"The Charter of Rights and Freedoms explicitly states that all Canadians have the right to enjoy a Timmies egg and cheese on a biscuit with an egg patty. Shame," calls out Sarah Conway on Change.org.

The rally cry for Timmies to bring back the old egg is also striking a chord on social media, as this B.C. TikTok demonstrates:

Sadly, for many Timmies loyalists, this, and other changes, are pretty locked in for the chain.

"Tims is committed to delivering better food quality across the board and that's really exemplified by the move to freshly cracked eggs, along with the other important changes we made with elevating the bacon and English muffins and buttery biscuits for our breakfast sandwiches. There are more amazing food changes coming to Tim Hortons this year and I'm so excited for guests from coast to coast to coast to try them," said Chef Tallis Voakes, Tim Hortons' culinary lead.