Dozens of purported consultants tied to alleged inside traders may not face a BCSC hearing
Apr 29, 2021 4:45 PM By: Graeme Wood 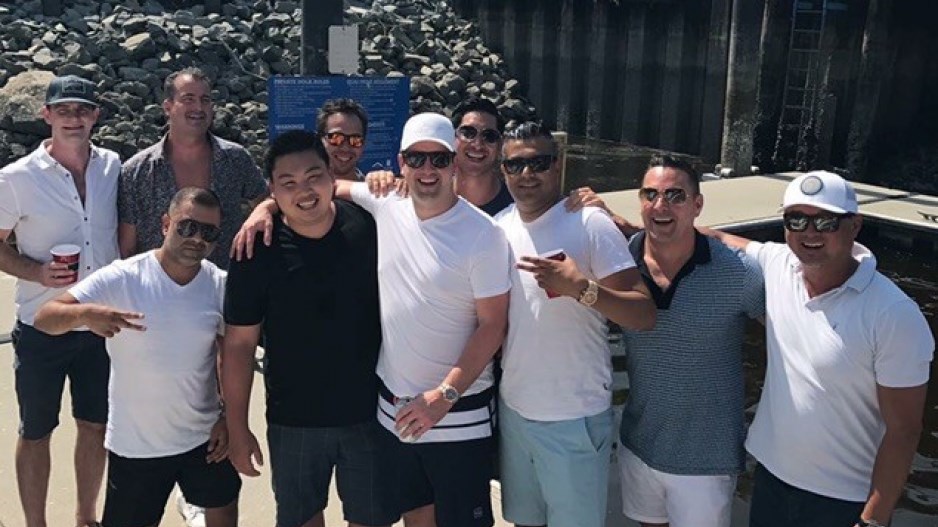 A photo submitted to Glacier Media shows Aly Babu Mawji, front and first from left, Justin Liu, front and second from left, and Anthony Jackson behind, with friends in False Creek ahead of a yacht ride to celebrate Liu’s birthday in summer of 2018 as securities regulators were honing in on the “Bridgemark Group" Submitted

The B.C. Securities Commission announced Thursday it has dropped serious allegations against dozens of purported consultants and their respective companies, known as the Bridgemark Group.

Instead, the commission has amended its Nov. 26, 2018, notice of hearing to include only four of these purported consultants and their six respective companies, who are now alleged to have performed insider trading and/or conducted themselves contrary to the public interest as directors.

“Between February and August 2018, the respondents allegedly took part in a scheme involving nine issuers that raised $50.8 million through 12 private placements. The issuers kept only a small portion of those funds. They paid most of the remaining funds to consultants as prepaid consultant fees, despite the fact that little or no consulting work was done to warrant those fees.

“Some of the consultants purchased shares of the issuers through a consultant exemption, so as a result, they could sell them immediately without a hold period,” stated BCSC.

Liu, Jackson and Paddock plus Lukor, BridgeMark, Tavistock and Rockshore “bought or sold their shares with the knowledge that the issuers kept only a small portion of the funds they raised, a material fact or change that wasn’t disclosed to the public.”

By doing so, the BCSC alleges that they committed insider trading. The BCSC also alleges that Liu did not file any insider reports for buying or selling shares of two issuers.

The BCSC’s allegations have not been proven. The commission says it will schedule a hearing date on July 14, 2021.

The commission states Brady may, by May 28, “recommence proceedings against those parties in the future for conduct described [in] the original notice.”

If a party has not been notified by that date, the commission states Brady has no intention of recommencing proceedings.

Those who have had the commission’s allegations dropped (at least for now) include many professionals closely connected to Jackson, such as: his father-in-law and former City of North Vancouver manager Kenneth Tollstam; his sister Tara Haddad; his brothers-in-law Abeir Haddad and Ryan Venier; and a number of business associates, including Aly Babu Mawji, who was inexplicably able to return to Vancouver’s capital markets scene following a criminal conviction in Germany for conducting a pump and dump scheme. Mawji was banned by the BCSC in February 2020. Jackson’s wife Lisa Jackson – a realtor – is a hearing respondent in a similar case with the Alberta Securities Commission.

Lisa Jackson and her father, Tollstam, bought a $16 million West Vancouver waterfront home in November 2018. The commission initially froze several assets but eventually backed off on many of them and some respondents, including Liu and Jackson, continue to fight their freezes in court, on constitutional grounds.

Last year the commission dropped temporary trade orders against most of these purported consultants, including Lawrence and Paddock.

It remains to be seen the exact association the purported consultants had with what the commission has described as the “architects” of the group – namely Liu and Jackson.

Jackson is a registered accountant; Liu is known to have operated illegal cannabis shops; Paddock is a former professional hockey player; and it’s unclear what Lawrence may do outside of the trading world, if anything.

A class action claim against the respondents and others asserts Liu, Jackson, Mawji and Paddock conceived the scheme. The litigants have reached a settlement (worth $2.4 million) with Beleave Inc., one of 11 Canadian Securities Exchange-traded companies named in the original notice of hearing.

It remains to be seen if the RCMP’s Integrated Market Enforcement Team will investigate the matter. The BCSC refers files to police but only issues civil penalties, such as trading restrictions or monetary fines, many of which go unpaid. Recently the commission was granted power to revoke driver’s licences for unpaid fines.