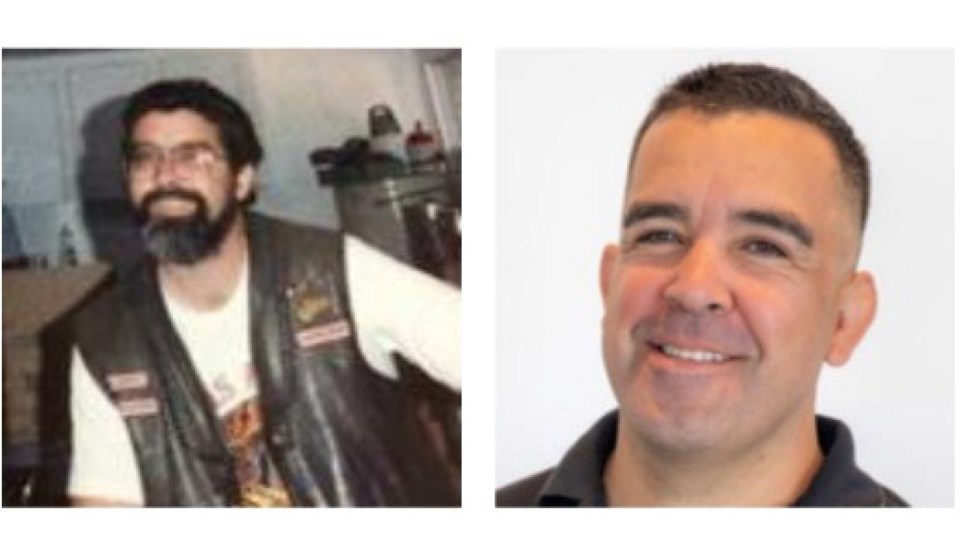 Phillip Chappell as a young man, left, and Harley ChappellFacebook
B.C.’s director of police services bypassed the standard police board appointment process in appointing Harley Chappell — the son of a declared former member of the Hells Angels — to the Surrey Police Board.

A June 1, 2020 briefing note from director Brenda Butterworth-Carr to Minister of Public Safety and Solicitor General Mike Farnworth shows how the provincial government appointed its seven members to the newly established nine-member board.

The note explains the “Indigenous peoples considerations” that factored into Chappell’s appointment.

Butterworth-Carr stated she received 76 applicants, conducted 25 interviews and then made recommendations to Farnworth for six candidates, after 11 secondary interviews. After listing the six double-interviewed and recommended members, the note subsequently indicates: “The director also recommends the appointment of the Chief Harley Chappell from the Semiahmoo First Nation.”

That Semiahmoo First Nation (SFN) is the only First Nation with lands that fall within the municipal boundary was another factor.

“To ensure SFN’s interests are represented and to support the Province’s commitment to reconciliation, the Director recommends the appointment of Chief Harley Chappell as a provincial appointee to the Board.”

Butterworth-Carr used the recent appointment of Tsawwassen First Nation Chief Ken Baird to the Delta Police Board to support her recommendation of Chappell.

There’s no indication from the note Chappell had competition from within Surrey’s Indigenous community, which is the largest urban one in the province and includes the Katzie First Nation on unincorporated Barnston Island, which is served by Surrey RCMP.

When Glacier Media asked the ministry specific questions about Chappell’s appointment, ministry spokesperson Jason Watson stated: “An extensive assessment and screening process is used to interview and appoint community members with the skills, competencies and attributes that align with the needs and responsibilities of the Board. Candidates are interviewed, complete a declaration form (Candidate Profile Declaration), which includes declarations of conflicts of interest and any other information that might be of concern, and consent to a criminal record check.”

It’s not made clear if being the son of a former Hells Angel might be of concern.

Watson stated the director reviewed the Surrey Police Board (SPB) appointees “and is satisfied that the established processes were followed in this case.”

The ministry did not confirm or deny if Chappell made known his father’s former participation in the motorcycle club and gang.

The appointment of Chappell has been widely criticized. Critics suggest it highlights a process that’s been rushed for political expediency.

Photos of Chappell at a Hells Angels funeral, standing alongside full-patch members, emerged on social media in December. Chappell told the Vancouver Sun his dad, Philip Chappell, left the gang in 1992 and that he no longer has any association with the club, which the BC RCMP does not classify as an organized criminal organization.

The SPB is overseeing the transition process from the Surrey RCMP to the Surrey Police Service.

Surrey RCMP will eventually hand over all investigation files to SPS. One of those files will be a dormant investigation of a fire that burned down Philip Chappell’s home on Dec. 21, 2018, that investigators deem suspicious.

Chappell did not respond by email to an invitation to speak to his appointment process, nor did acting director Wayne Rideout, who conducted the apparent review late last year.

Criminologist Rob Gordon at Simon Fraser University says the government seems intent on forging ahead with Chappell on the SPB.

“I suspect that were Chappell not who he is they would not have put him on the Police Board. On balance the optics are dreadful but arguably outweighed by the issue of indigeneity, in the current climate,” stated Gordon via email.

“That said, there is nothing ‘illegal’ about the appointment. Not off to a good start, but [government] is obviously not wanting to change the decision.... Too far down the road now,” stated Gordon.

Chappell’s term with SPB is set to expire either July 8, 2021, or January 8, 2022 (the briefing note redacts which option it is), at which point the ministry along with the Crown Agency and Resourcing Board may choose to reappoint.

Chappell has taken on the role of chair of the governance committee and among some of the first steps taken by the SPB has been an assessment of Indigenous policing issues.

The board’s chair, Surrey Mayor Doug McCallum, is directing city staff to replace city appointee Bob Rolls, who quit the board earlier this year to move away from Surrey.

Questions raised after photos surface of Surrey police board member with Hells Angels
Dec 11, 2020 9:38 AM