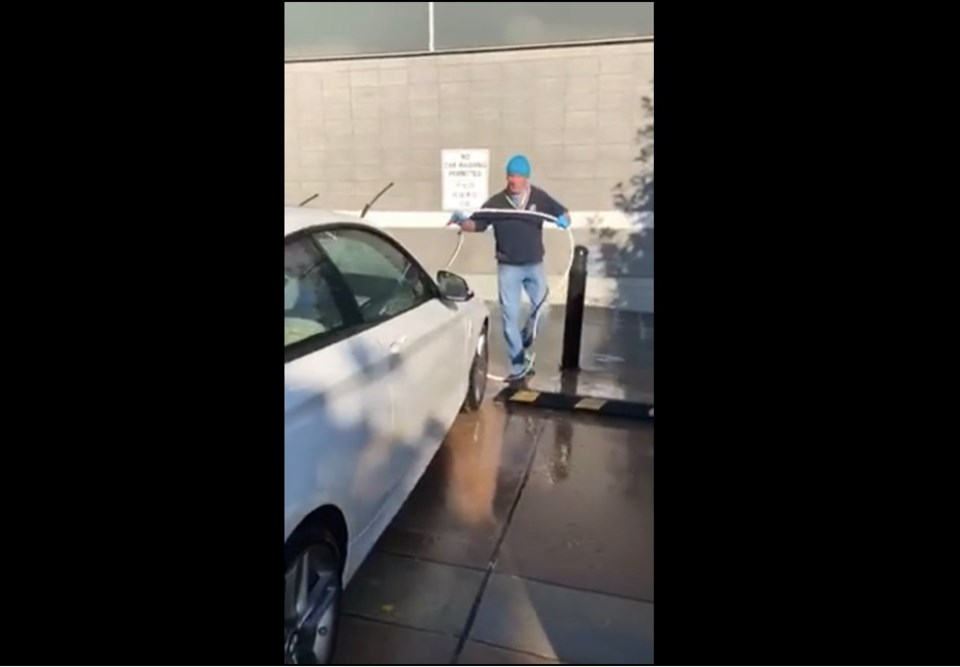 The video shows this man telling the filmer to "go back to China." Video screenshot

A suspect involved in an alleged verbal assault in Steveston on Monday afternoon appears to be the same man videotaped telling a woman to “go back to China” in one of North Richmond’s parking lots two years ago.

The earlier video emerged after an incident in Steveston on Monday afternoon in which a man allegedly yelled racial slurs at a worker and poured coffee on the floor when the worker asked the man to respect social distancing regulations. A second suspect also appeared to dump their coffee on the floor and then toss the remaining coffee and coffee cup at the face of the worker.

Police were called and arrested one of the suspects at the scene.

The employee involved posted video of the incident on social media, which shows the suspect was driving a BMW vehicle with the same license plate as a man who was allegedly involved in a racial attack in November 2019.

The 2019 altercation took place at a Richmond condo complex near Cambie Road and No. 4 Road. It began with a man washing his vehicle in a no-washing zone, blocking several parking stalls while doing so.

A woman, who asked to remain anonymous, said she was trying to record the man’s license plate to report it to the strata.

When she got out of her car, the man appears to yell racial slurs at her and sprayed her with the hose he was using to wash his car. The man also repeatedly told the woman to go back to China. The woman posted the video on social media but did not report the incident to the police at the time.