'We're back': Montreal festival promoters happy to return but looking to next year 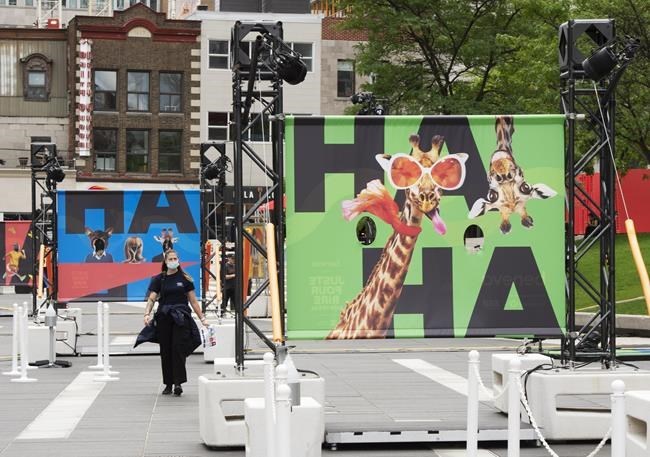 In the city’s entertainment district, a musical act was conducting a sound check on stage Friday evening — the second day of the French-language version of the renowned Just For Laughs comedy festival. Tickets for many of the festival’s free outdoor shows — limited by COVID-19 regulations — were sold out.

Two blocks away, more than 100 people were watching an acoustic performance by the Isaac Neto Trio — part of the last weekend of the Festival International Nuits d'Afrique, a celebration of music from the African continent and the African diaspora.

With COVID-19 restrictions continuing to limit capacity, festival organizers say they're glad to be back but looking forward to next year when they hope border restrictions and capacity limits won't affect their plans.

Charles Decarie, Just For Laughs' CEO and president, said this is a "transition year."

"Even though we have major constraints from the public health group in Montreal, we've managed to design a festival that can navigate through those constraints," Decarie said.

The French-language Juste pour rire festival began on July 15 and is followed by the English-language festival until July 31.

When planning began in February and March, Decarie said, organizers came up with a variety of scenarios for different crowd sizes, ranging from no spectators to 50 per cent of usual capacity.

"You've got to build scenarios," he said. "You do have to plan a little bit more than usual because you have to have alternatives."

As in the past, the festivals include both ticketed indoor shows and free outdoor performances. Outside, there will be fewer stages and smaller crowds than in years past, Decarie said. Indoor performances will run at 30 per cent capacity, while outdoor shows will have around 10 to 20 per cent of their pre-pandemic capacity.

"Normally, we get about one million people during the festivals over 15 days, and this year, we would be happy to have 200,000 people visiting us over the next couple weeks," Decarie said.

Quebec's COVID-19 restrictions limit outdoor events to a maximum capacity of 5,000 people, who must be divided into separate sections of 500 people. Indoor events are capped at 3,500 spectators, who must sit in sections of 250 people, with separate entrances and washrooms for each section.

Due to the border restrictions, which Decarie describes as a "massive concern," some performances are being filmed in New York and Los Angeles and will be streamed online.

"That's how we've been able to reach out to international talent," he said. "We've decided to change the way we proceed, and we went to them."

In-person shows will have a focus on local talent, he said.

Other Montreal festivals also say they plan to work around the border restrictions by focusing on local talent.

The Festival International Nuits d'Afrique is featuring local artists and drawing on recorded performances from previous years, Suzanne Rousseau, the festival's managing director and co-founder, said in an interview Friday.

"The first nights, especially, were amazing," she said of the festival, which started July 6 and runs until July 18. "The artists were saying it's my first show in front of a live audience in a year and a half."

The festival's outdoor component consists of two smaller "cabaret" stages, Rousseau said. Instead of a main stage, there is a sound and light show projected on a building, including video performances from the festival's 35-year history.

"What's important is that festivalgoers are able to come and see live shows — that was big, big, big," she said. "And to have some online shows for the people who can't make it to Montreal or can't travel."

Rousseau said she hopes to keep some of the online components in future years, but she's also looking forward to having a bigger festival next year.

"We're really happy to have done a festival this year, it prepares us for next year," she said. "It gives us the ambition to be ready to receive more people, more acts and a complete experience."

Some of Montreal's large summer festivals, including Montreal's jazz festival, Festival International de Jazz de Montréal, have been pushed back to September. Rousseau, however, said she never considered delaying this year's edition of Nuits d'Afrique.

"It's really important to be there in the summer; there was no doubt we were going to do it," she said.

Francis Bouchard, a spokesman for Tourisme Montréal, a non-profit that promotes the city's tourism sector, said that with rescheduled events, the city's summer festival season will last until October this year. It's encouraging, he said, to see festivals and events that were postponed or cancelled last year scheduled to return this summer and fall.

"It's a relief that it's coming back," Bouchard said. While border restrictions limit visitors, tourism advertising campaigns are now targeting Canadians, he added.

Decarie said he's optimistic about the future of festivals in Montreal, adding that people "have an appetite to be out there, to celebrate summer in the city."

This report by The Canadian Press was first published July 17, 2021.