Siemens Mobility is beefing up its domestic capabilities to better compete for the many mass transit projects that Canadian governments are planning to fund over the next decade.
May 26, 2021 9:06 AM By: The Canadian Press 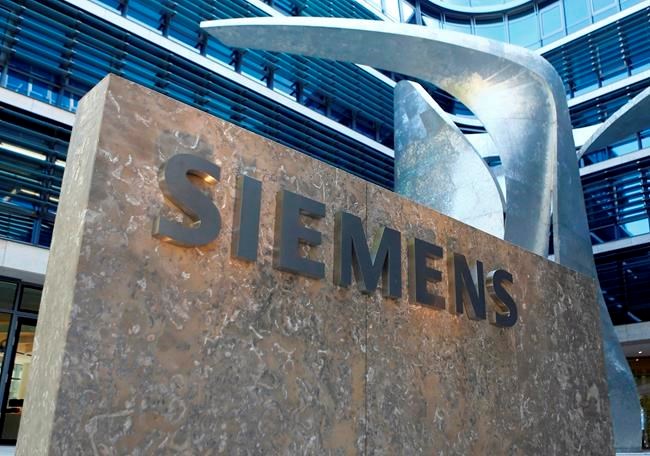 Siemens Mobility is beefing up its domestic capabilities to better compete for the many mass transit projects that Canadian governments are planning to fund over the next decade.

The agreement enhances Siemens' railway track and signalling, electrification and communication systems expertise to deploy the next generation of rail technologies.

Financial terms of the deal that is expected to close July 1 were not disclosed.

It's the first of what Siemens hopes will be many such deals to enhance its capabilities to go up against global giants such as Alstom, which recently became the world's second-largest railway maker after acquiring Bombardier Transportation.

"We are on the hunt to invest more in Canada," Yves Desjardins-Siciliano, CEO of Siemens Mobility in Canada, said in an interview.

The former head of Via Rail had first-hand experience with Siemens before joining the firm last year since Siemens is supplying the passenger service's new rolling stock starting later this year.

Desjardins-Siciliano said it will grow up as opportunities surface but it has no specific target for how large it would like to be.

"There's no target size but we're looking to scale up as quickly as possible with complimentary capabilities while respecting the cultural traits of Siemens Mobility."

While Siemens builds and maintains trains and railway systems, it doesn't maintain infrastructure such as railway beds and tracks.

"So with RailTerm joining the team, now we have the ability to service the full complement of what constitutes an operating railway."

Founded in 1996, RailTerm has more than 70 clients globally among passenger, freight and industrial rail customers. It has maintained rail beds and signalling systems in the Ontario-Quebec corridor and dispatched trains including Via Rail.

The firm supports technology from different companies, including Siemens, Alstom, Bombardier and Hitachi, and will continue to do so under the auspices of Siemens.

Siemens Mobility has been a player in Canada's transportation industry for more than 40 years, including supplying light rail vehicles in Edmonton and Calgary, modern train sets that will be delivered to Via Rail starting in 2021, the electrification of the Kitchener-Waterloo light rail system and signalling and train control for Ottawa's Trillium line.

Desjardins-Siciliano said COVID-19 accelerated mass transit opportunities as federal, provincial and local governments have announced plans to fund billions of dollars worth of projects. These include the Ontario Line in Toronto, a tramway in Quebec City, a REM extension in Montreal East, Gatineau/Ottawa LRT, Ottawa LRT expansion, Hamilton LRT and projects in Alberta and British Columbia.

"So the timing (of the RailTerm acquisition) was incredibly propitious and so we started with the notion of building a Canadian company," he said.

Some 200 employees in Quebec and Ontario will be added to Siemens Mobility's current team of about 50 employees that has doubled in size over the past year.

"To me for the next decade there will be significant mass transit opportunities in Canada because I think all governments have recognized the need to modernize the people movement in Canada and mass transit is the most effective way to do that."

Siemens builds its trains at different manufacturing facilities around the world, including a large plant in California where the Via trains are being assembled.

As opportunities arise, it would expand its manufacturing sites in North America, including possibly Canada, said Desjardins-Siciliano.

"It will all depend on how big are those business opportunities and how successful we are at capturing them."

Siemens Mobility expansion plans are focused on the Canadian market and aren't part of consolidation in the global railway industry, he said.

"This is really part of Siemens Mobility looking at Canada as a very valuable market, a growing market and wanting to create an important Canadian presence with a full portfolio of expertise that are local."

He said French-based Alstom's acquisition of Bombardier's railway division creates a more formidable competitor that will benefit the entire industry.

"So the industry benefits from having strong, financially solid companies and may the best man win and we intend to get our fair share of those opportunities."

This report by The Canadian Press was first published May 26, 2021.