Quebec needs to make up the economic ground lost during the pandemic before it can balance its books, which will take another six years, Finance Minister Eric Girard said Thursday.
Mar 25, 2021 2:39 PM By: The Canadian Press 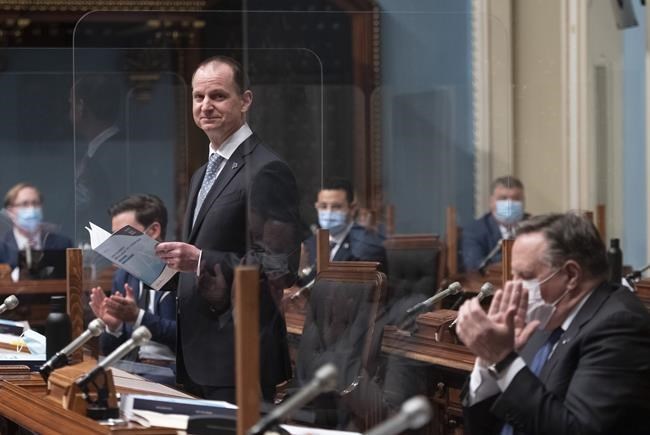 Quebec needs to make up the economic ground lost during the pandemic before it can balance its books, which will take another six years, Finance Minister Eric Girard said Thursday.

Girard tabled his third budget since becoming finance minister, and he forecasts a deficit of $12.3 billion this fiscal year. He also estimates the damage caused by the pandemic will leave a structural deficit of $6.5 billion.

He said his plan is to balance the books by the 2027-28 fiscal year. And to succeed, he said, the government will need to amend a law that requires the state to return to a balanced budget five years after posting a deficit.

“I think we need to recognize that we’re still in the pandemic,” he told reporters in Quebec City, explaining why his government can’t balance the books within the time frame required by law. “So, the number 1 priority is to fight the pandemic. There is no economic rebound unless there is health safety.”

Girard said the government’s first priority remains dealing with COVID-19, followed by getting people back to work. Getting economic growth back to pre-pandemic levels is his third priority – and after that it’s budgetary balance.

“The $6-billion effort over five years is manageable,” he said about reducing the structural deficit after the pandemic is over. “It’s less than one per cent of our expenses. It is manageable, we can do it, but we need to start once we’ve reached full employment.”

Last March, before the pandemic caused Quebec’s GDP to contract by 5.2 per cent, Girard’s 2020-21 budget forecast a $2.7-billion surplus. That became a $15-billion deficit over the course of the fiscal year.

In total, Girard said he expects COVID-19 to cost the Quebec government $30 billion, with around half coming from a drop in revenue and half from increased spending. The minister said his government spent $12 billion on COVID-19 -related measures in 2020-21 and will spend another $4.3 billion on the pandemic in 2021-22.

The budget forecasts total expenditures by the government will be about $130.5 billion this fiscal year, including debt service and COVID-19 related costs. Spending on programs – including COVID-19-specific costs – will drop by about 1.2 per cent compared with last year.

Girard is estimating the province’s GDP will rebound by 4.2 per cent this year after last year's pandemic-induced drop. He called the forecast “prudent” and below the median projected by private sector economists.

Speaking in the provincial legislature, Girard said the budget takes into account Quebec's plan to give every resident who wants to be vaccinated against COVID-19 at least one dose by June 24.

"This gives us confidence in the future, and it is with this confidence that we have prepared this budget," he said.

Debt servicing will increase by more than 12 per cent this fiscal year, to $8.6 billion. Quebec’s net debt-to-GDP ratio, which estimates the province’s ability to pay back debt, will rise by about 13 per cent, from 39.9 per cent to 45 per cent.

Girard described the debt as “under control” and said the province has a "coherent plan" to reduce it.

The budget includes $15.5 billion in new program spending over the next five years, with $5.2 billion set to be spent this year. Most of that — $2.9 billion – is earmarked for the health-care system.

There will also be new tax credits for seniors who need home care and for low-income seniors.

Programs to help businesses weather the pandemic have been extended, and small businesses will get a credit that will reduce the tax rate on their first $500,000 of taxable revenue. The government also plans to spend $246 million over the next two years to help immigrants integrate into the labour market.

The budget includes a total of $22.5 million over five years to support women who are victims of domestic violence, an amount that was described as too little by several opposition parties.

“We just don’t know what’s going to happen in the next months,” Andre Fortin, the Liberal finance critic, told reporters.

He said the focus on infrastructure is also the wrong approach. “It doesn’t address the need coming out of the pandemic,” Fortin said, adding that women were most affected by pandemic-related job losses.

“The government is basing its relaunch of the economy on a sector that’s already doing well — the construction sector — so the only thing that can happen is that prices will continue to go up,” Fortin said.