TORONTO — Justice Minister David Lametti told the Commons heritage committee Tuesday said it's not his role to give a legal opinion on revisions to a bill that aims to regulate internet platforms.
May 18, 2021 3:33 PM By: The Canadian Press 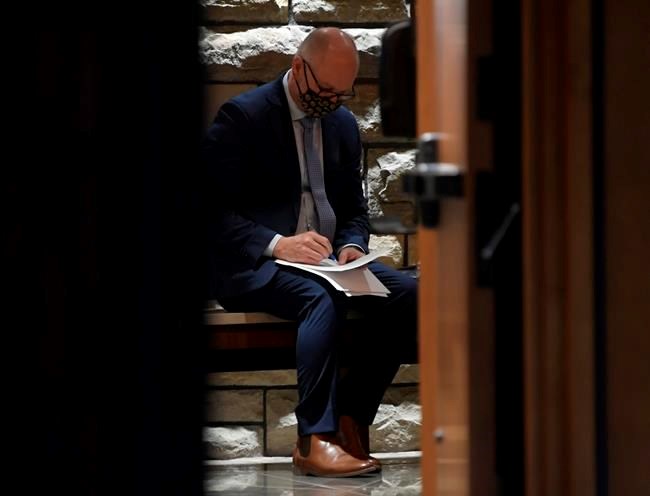 TORONTO — Justice Minister David Lametti told the Commons heritage committee Tuesday said it's not his role to give a legal opinion on revisions to a bill that aims to regulate internet platforms.

Lametti said that, as a member of the Liberal cabinet, he supports Bill C-10 but as justice minister "I am not here to offer legal advice or opinions … That is something that I never do publicly."

But that didn't stop opposition MPs on the committee from grilling Lametti about the implications of removing a section of Bill C-10 last month during clause-by-clause analysis of the legislation.

Conservative MP Rachael Harder, who has insisted for weeks that the legislation was fundamentally changed by the removal of Section 4.1 from the original bill, was first to demand answers.

"Experts in the industry now say that the removal of Section 4.1 takes away the safeguards that were imperative to protect user-generated content. Do you agree with that?" Harder asked.

But Lametti said his department responded to the committee's concerns last week by providing a document that says the bill meets the requirements of Canada's Charter of Rights and Freedoms.

Lametti sent his deputy minister and other officials to face the all-party committee last Friday, but its members pushed for him to appear in person to answer questions about Bill C-10.

Although none of the opposition MPs on the committee seemed satisfied with what they got from Lametti on Tuesday, it appeared the Liberal MPs had enough support to set the debate aside.

The clause-by-clause analysis is set to resume Wednesday, a necessary step before the bill returns to the Commons for a vote, but the bill's passage isn't assured because the Liberal government needs opposition support in the minority Parliament.

If passed, the bill will mark the first major updates to the Broadcasting Act since social media platforms became a major source of individual and commercial communications.

Under amendments introduced recently amid the debate, Bill C-10 would give the regulator CRTC three new roles.

Those include collecting information about revenue generated by internet platforms in Canada, and determining how much should be used to fund original Canadian content in the same way the CRTC does with conventional broadcasters.

The third role, and one of key objections to Bill C-10, is to ensure Canadian content is easily discoverable or promoted on the platforms.

Heritage Minister Steven Guilbeault, who appeared Tuesday with Lametti but was shut down by MPs who grilled him last week, says Bill C-10 will ensure platforms like YouTube are treated like broadcasters when they stream audio and video content as radio or TV broadcasters do, levelling the playing field.

But Guilbeault's handling of the file has been criticized — including by the committee — because it hasn't dealt with criticism that Bill C-10 will infringe on individual internet users.

The Liberals also must contend with some former members of the Canadian Radio-telecommunications Commission who have denounced the bill.

"I think it's a very bad idea. I think it's the equivalent of an enabling act for the control of communications," former CRTC member Timothy Denton said in an interview Tuesday.

Denton, a retired lawyer who was a member of the CRTC from 2009 through 2015 and currently chairs Internet Society Canada, said he doesn't think the legislation can be salvaged.

He was part of the CRTC when the appointed body decided not to regulate the internet because it wasn't necessary.

But Denton said he had another reason for saying the CRTC, which traces its history to the early days of radio, should keep its hands off the internet.

"I have always felt that the CRTC's claims to have jurisdiction over the internet is bad law, and would be found to be unconstitutional," Denton said.

With Bill C-10, the CRTC's mandate would be expanded to include some activities of internet platforms and Denton said that's the wrong approach to take.

Guilbeault has said Bill C-10's critics aim to delay the legislation long enough that it can't be passed before the next election.

He says speed is necessary to ensure that international internet giants are required to contribute funds that pay for professionally produced content.

This report by The Canadian Press was first published May 18, 2021.