TORONTO — Rising commodity prices lifted the loonie to reach a near three-year high and propelled Canada's main stock index to a stronger start of the trading week.
Feb 22, 2021 2:02 PM By: The Canadian Press 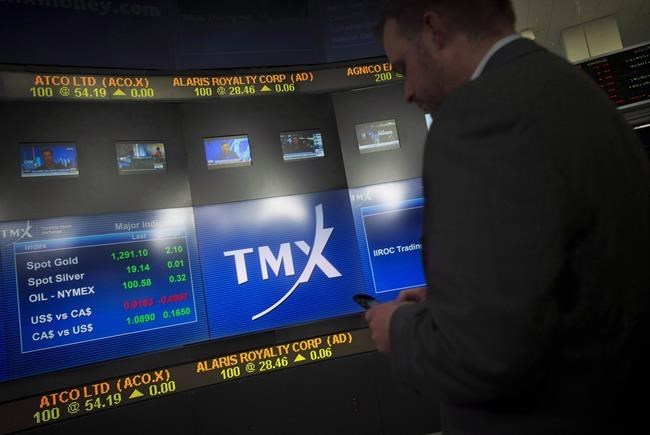 TORONTO — Rising commodity prices lifted the loonie to reach a near three-year high and propelled Canada's main stock index to a stronger start of the trading week.

Both crude oil and metals prices climbed as investors continued to rotate away from sectors that led during the COVID-19 pandemic and toward previous laggards.

"It's a positive tone for the market. A strong cyclical economic recovery appears to be around the corner and investors are trying to position for that."

Energy, materials and financials led the TSX while technology and utilities were down.

Energy gained five per cent as crude oil surpassed the US$60 threshold. That prompted shares of MEG Energy Corp. and Vermilion Energy Inc. to surge 13.4 per cent, followed by Enerplus Corp. at 10.5 per cent, and Suncor Energy Inc. at 8.2 per cent.

Crude prices rose on ongoing production uncertainties in Texas from the recent freezing conditions, questions about whether U.S. sanctions will be lifted against Iran, and next week's OPEC plus Russian meetings, said Kourkafas.

"The economy's gaining steam and that's showing up not only in crude oil but commodity prices," he said in an interview.

Materials was 3.3 per cent higher as gold and copper prices increased, with shares of New Gold Inc. increasing 13 per cent and First Majestic Silver Corp. up 12 per cent.

"Rising inflationary expectations, rising yields and an outlook for a rapid recovery in the second half  of the year, that's boosting commodity prices."

The Canadian dollar was unchanged at 79.28 cents US but hit a high of 79.50 cents US earlier in the day.

The heavyweight financials sector also got a lift a day before banks start to report quarterly results.

A steepening yield curve is also helping the profitability of the banking and insurance segments.

Health care, technology, utilities and consumer staples were among the losing sectors.

Industrials was also lower even though Air Canada shares climbed in lockstep with U.S. airlines, gaining 4.4 per cent on the day.

The airline sector got a lift following an upgrade by a Deutsche Bank analyst.

Kourkafas also said Israel's encouraging early indications after its leading vaccine effort is positive for the reopening of global travel that has been hit hard by the pandemic.

Kourkafas called Monday a good start to the week in Canada.

"If we look under the hood, what's been leading has been these economically sensitive areas that project a faster return to normal as the year progresses."