CALGARY — Alberta is ratcheting up the fight in two COVID-19 hot spots by expanding age eligibility for vaccines and directing delivery of more doses.
Apr 28, 2021 3:51 PM By: The Canadian Press 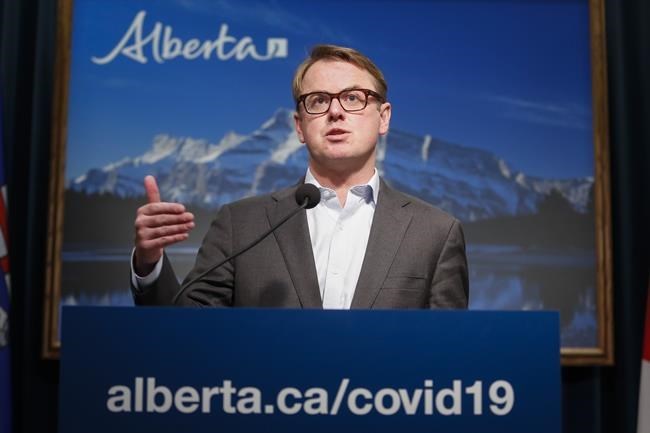 CALGARY — Alberta is ratcheting up the fight in two COVID-19 hot spots by expanding age eligibility for vaccines and directing delivery of more doses.

Premier Jason Kenney says the measures will help address concerns in Banff and Lake Louise, as well as in the Regional Municipality of Wood Buffalo, which includes the oilsands hub city of Fort McMurray.

“We are at the 10-yard line. The end is very much in sight,” Kenney said Wednesday of the surge in COVID-19 cases.

“But we’ve got to get over the hump of this current wave.”

Kenney said shipments of the Johnson & Johnson vaccine are expected to arrive Monday and will be directed to the hot spots. He said that will continue for the next two weeks as supplies permit.

Also, the age eligibility for the Oxford-AstraZeneca vaccine, currently at 40 and up in Alberta, will be reduced to 30 in the troubled areas.

The Moderna vaccine will also be made available to Indigenous people in Wood Buffalo as young as 30 and vaccination times will be extended to 10 p.m. Data is showing there is a lower uptake in the municipality right now compared with the provincial average.

Banff-Lake Louise and the Wood Buffalo area have been the hardest-hit areas in a province where COVID-19 cases have soared in recent weeks, propelled by more contagious variants that now make up two-thirds of all active infections.

On Wednesday, there were 20,938 active cases, the second-highest total since the pandemic began. The highest was in mid-December: 21,649.

Wood Buffalo Mayor Don Scott said the vaccine changes are a strong first step to corralling the virus, which has led to more than 1,200 cases locally, all but a handful in Fort McMurray.

The surge has also pushed the area’s one hospital to capacity, so more beds are being added to the intensive care ward.

“We’re not out of the woods yet by any means, but I consider this to be substantial progress,” said Scott.

“Lowering the age eligibility is going to make a big difference.”

He said the region’s demographic is mainly young families and young workers previously ineligible for the vaccine.

But Chief Allan Adam of the area’s Athabasca Tribal Council said Kenney failed to address key questions about more restrictions, including curfews or stay-at-home orders, to bring the caseload down.

“We need a field hospital. The (existing hospital) is being filled up with COVID patients,” said Adam.

“They’re not putting restrictions on anything. It’s business as normal for them. They say if people were to get vaccinated that will divert the curve, and that’s a poor excuse.”

“We have a very young population and a majority of our population are front-line workers, and we, of course, welcome visitors continually into our community,” said Sorensen.

“Being able to lower that age (of vaccine eligibility) is crucial.”

Banff and Lake Louise were dealing with 158 active cases.

Provincewide, almost 1.5 million doses of vaccine have been administered. Almost 40 per cent of Alberta’s adult population has received at least one shot.

Kenney has dismissed bringing in more health restrictions. He said more vaccines are on the way and are the best way out of the pandemic.

The province also announced 1,839 new COVID-19 cases Wednesday. There were 643 people in hospital, 145 of them receiving intensive care.

Alberta Health Services is also reducing reduce scheduled non-essential surgical activity up to 30 per cent in the Edmonton, Calgary and North zones due to rising cases.

This report by The Canadian Press was first published April 28, 2021.

— By Dean Bennett in Edmonton

Souvankham Thammavongsa among finalists for Ontario's Trillium Book Award
May 11, 2021 3:05 AM