Canada coach John Herdman acknowledged Monday he has experienced anxiety during the pandemic, triggered by concerns over the safety and well-being of his players and staff.
Jun 7, 2021 2:29 PM By: Canadian Press 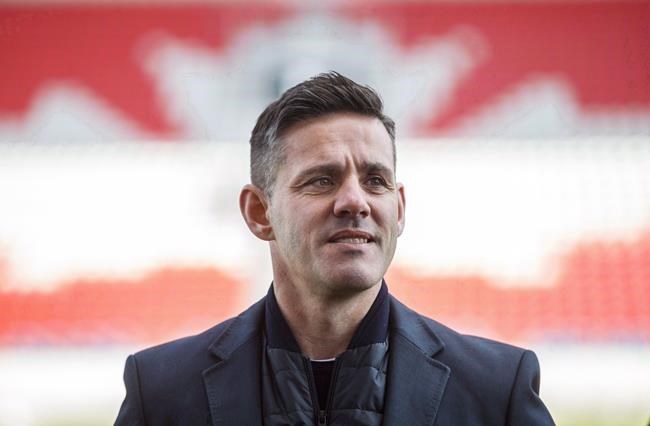 Canada coach John Herdman acknowledged Monday he has experienced anxiety during the pandemic, triggered by concerns over the safety and well-being of his players and staff.

The 45-year-old Herdman said when it comes to performance pressure "that's what I get out of bed for." But the realities of running a program during a time of COVID-19 has taken its toll.

"It's been an interesting year for mental health," Herdman told a virtual news conference. "I'd have to say I've suffered myself through periods of anxiety through this stage, from October onwards.

"As a coach, when you sign up for these jobs, when you started — before you even dreamed of being at an international level — when you just worked as a grassroots coach, the first thing you got into coaching for was because you enjoy working with players," he added. "But the most important thing is you keep them safe.

"And I think that's been one of the scariest parts of this job, that's created that level of anxiety, that you're being asked to go into an environment where if someone gets seriously sick, you don't know if they've got ICUs (intensive care units). You don't know what beds are available. You don't know if someone's going to come out worse or better when they went into a hospital in some of the places we've got to go to."

Canada is facing a trip to either Haiti or Nicaragua, depending on what happens against Suriname in a crucial World Cup qualifying game Tuesday in Bridgeview, Ill.

The Canadian men were forced to shift their first two home World Cup qualifying matches to the U.S. — In Orlando and Bridgeview — because of pandemic-related border issues. A game scheduled to be played in the Cayman Islands was also moved to Florida.

But if the Canadians tie or beat Suriname on Tuesday in suburban Chicago, they face the prospect of a home-and-away playoff that will see them have to go either to Port-au-Prince or Managua later this week for a game Sunday.

The U.S. Centers for Disease Control and Prevention lists both Haiti and Nicaragua in its highest COVID-19 category, recommending that travellers avoid the two countries, saying even those fully vaccinated may be at risk for getting and spreading COVID variants.

The Canadian government recommends avoiding all non-essential travel outside Canada until further notice.

And COVID aside, it recommends avoiding Haiti "due to the potential for civil unrest throughout the country."

"The security situation could deteriorate quickly. Kidnappings of Haitians, dual-nationals and foreigners alike has increased in recent months in Port-au-Prince," it said in a travel advisory.

Ottawa also recommends a "high degree of caution" in Nicaragua due to the volatile security situation.

The Canadian men's program is back in action after missing almost all of 2020 due to the pandemic. Herdman is in the midst of World Cup qualifying and planning for the Gold Cup, which starts next month in the U.S.

The men held a camp in January 2020, playing three friendlies in California. The team didn't assemble again until this January when Herdman brought players in for a camp in Florida.

World Cup qualifying, which had been delayed due to COVID-19, finally started in March. It will run through this fall and early next year.

Even falling ill in the U.S. is an issue, said Herdman.

"You're dealing with people's careers. If someone gets sick (with COVID) in the U.S.A., it's not like they can just go home. They have to spend 14 days in the U.S. And that can wreck a player's career when they aren't in a squad for 14 days when the coach had told them you shouldn't have went anywhere.

"And we don't know how sick people are going to get (if they get COVID) … So I would say there's been a high level of anxiety around the preparation for those matches."

The good news is Canada Soccer says, as of mid-May, it had just two positives among 1,726 COVID tests since January in its "controlled environment" (both of which came from people reporting to camp).

Canada Soccer says it has planned extra medical and security staff for possible trips to Haiti or Nicaragua.

Being away from home was also difficult, said Herdman, a father of two.

He praised his Canada Soccer colleagues for their work to keep everyone safe.

"People are doing roles that they never dreamed of … We've all sort of clubbed together to make sure that our people have been safe."

No corners have been cut when it comes to health and safety, he said, suggesting that has not been the case with some of the teams they have competed against. The March game against the Cayman Islands in Bradenton, Fla., for example, was delayed a day due to issue with getting the Cayman Islands team not having the proper tests for its players.

Defender Doneil Henry, who plays his club football in South Korea, said he feels safe given the all precautions taken.

"I think everybody understands, with being in camp now, what it takes," he said. "Everybody's just being diligent and being safe. We get to play football. Everybody's doing it with a smile on their face."

This report by The Canadian Press was first published June 7, 2021.