What are those annoying swarms of insects you walk through in Vancouver?

Have you ever got a mouthful? Not fun.

Ah, summertime in the city.

Vancouver sees a great deal of rain throughout the year, but it enjoys relatively dry, warm summers without insufferable heat (generally). People smile more and there are a variety of activities to enjoy outdoors.

And while there aren't many horrible bugs to contend with, a couple of insects are dangerous.

B.C. officials will focus on the Fraser Valley in their efforts to track and eradicate Asian giant hornets this year (their sting packs a mighty wallop). Mosquitoes and ticks may not appear dangerous and scary, but their bites may lead to a range of diseases and even death.

With that in mind, you might not love the idea of walking through a swarm of bugs -- especially when you don't know what they are.

Metro Vancouverites have been sharing videos on social media of swarms of insects that look similar to mosquitoes. One person commented that "it isn't spring in Vancouver until you've walked through one of these."

Several people have wondered why the insects are flying in one area, while others have commented that they believe they are mating.

"I tend to see the swarms in patches of sunlight."

Allan L. Carroll, Professor of Forest Entomology, University of British Columbia, tells Vancouver Is Awesome that the insects in question are most likely midges.

Encyclopedia Britannica notes that while these tiny insects resemble mosquitoes, they are harmless, with "small mouthparts that are not elongated into a piercing structure for blood-feeding."

Not only will midges not bite you, but Carroll adds that it won't hurt you if you happen to swallow one or two.

"The big swarms that you see is actually a behaviour that, interestingly enough, also occurs in all other kinds of animals like grouse and deer for example -- even some fish do it," he said.

This type of behaviour is called "lekking" and the swarm is comprised of a group of male midges called a "lek." The females will sit on vegetation nearby and watch the males "show off" in the swarm, explains Carroll.

After this, the females select the males they feel put on the best buggy display and then they go off to lay their eggs; they only live a matter of weeks.

Carroll adds that he "tends to see the swarms in patches of sunlight toward the end of the day when the sun is sticking through the branches of trees; they'll be in the warm patch because insects are cold-blooded."

Have a look at a couple of videos of the leks. 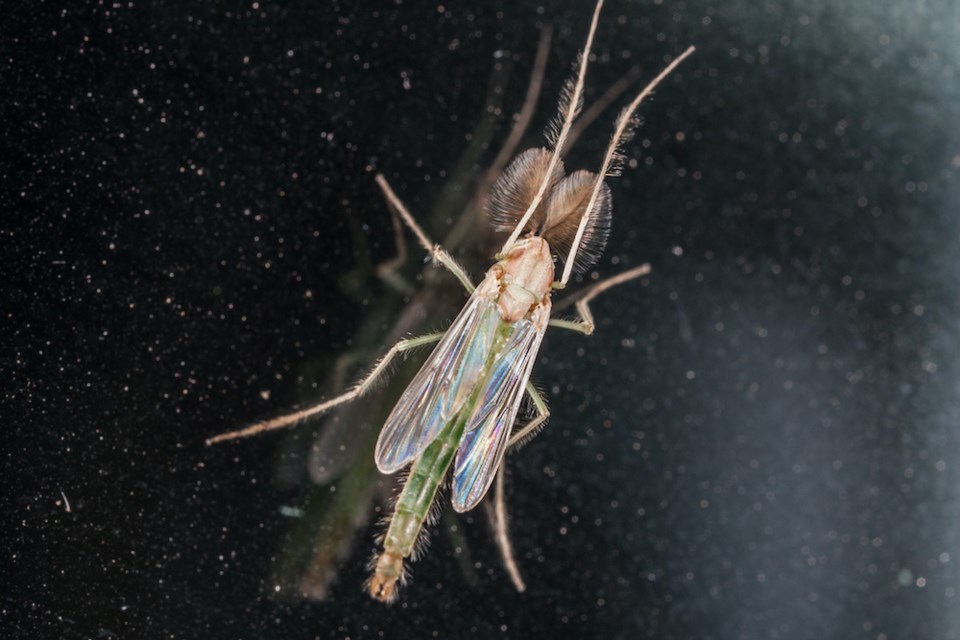